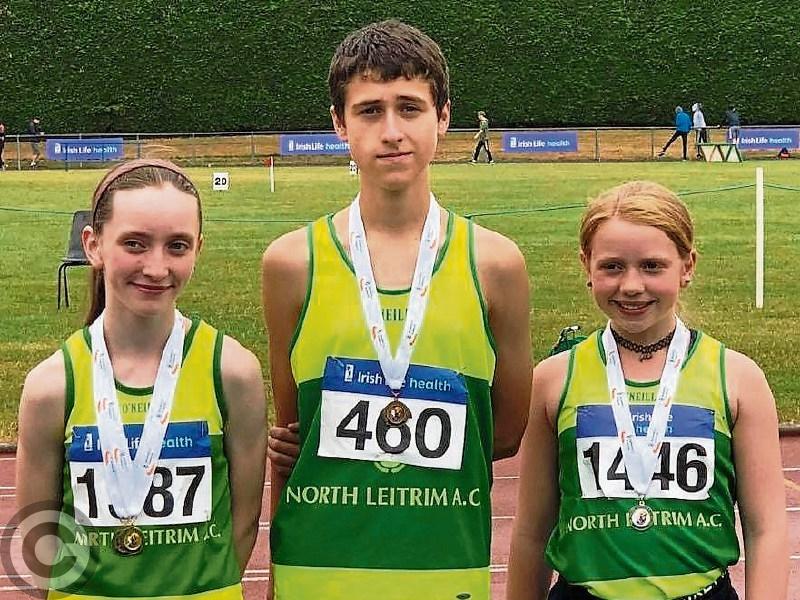 The North Leitrim AC athlete claimed a dominant victory in the U15 walk and followed it up with a bronze in the discus while clubmate Sara O'Beirne also won a silver medal in the U14 Girls walk.

Leitrim's recent sprinting tradition also saw Carrick AC's Alannah McGuinness claim a bronze medal in the U17 100m while her clubmate Ellis Conway was less than a tenth of a second away from a bronze in the U18 400m.

The walks also saw North Leitrim AC's Darragh Mitchell claim a bronze in the U16 Walk to maintain the county's rich tradition in the event.

Niamh Carolan claimed gold the U15 walk as she came home 24 seconds clear of second placed Maeve O’Connor of Waterford in a time of 11.06.07 and she went on to add a bronze in the discus when her fifth round throw of 27.82 secured her the bronze medal behind Niamh Quinn of Cushentown (31.88m) and Leah Parker of Midleton (30.46m).

Carrick AC’s Alannah McGuinness won her first ever All-Ireland medal when she knocked over a quarter of a second off her previous best time when she clocked 12.41 seconds to take silver in the U17 100m.

Alannah had won her heat in a new pb of 12.59 but went faster again and was only denied gold by Adeyemi Talabi of Longford.

North Leitrim’s Sara O’Beirne also claimed a silver medal when she fought a great battle with Cranford’s Bridin Doyle in the U14 walk, the Donegal athlete winning in a time of 11.35.48 to Sara’s 11.50.33 with the third placed walker over 26 seconds in arrears.

Darragh went on to finish 10th in the U16 Hammer, throwing 22.45m with clubmate Cormac Fahey throwing 25.06m for ninth, the event won by Jude McCrossan of Lifford Strabane with 46.85m. Cormac would also finish ninth in the U16 Shot with a best throw of 9.76m and ninth in the discus with 23.34m.

Ellis Conway came closest to claiming a medal when she was pipped on the line for the bronze medal in the U18 400m. Running a superb new pb of 58.60, Ellis finished fifth, tied on the same time as fourth and just 0.09 off the bronze medal.

There were a stream of sixth place finishes for Leitrim athletes - Sarah Brady set a magnificent new pb of 2.21.81 in the U16 800m while clubmate Ella McDaid also set a new pb of 12.50 to finish sixth in the U16 80m Hurdles Final after qualifying as a fastest loser.

North Leitrim AC throwers Aaron Bradshaw, Nathan Cassidy and Oisin Carolan had a busy weekend, competing in the U18 Hammer and Shot. Aaron threw 29.40 to finish fifth in the hammer with Nathan sixth with 24.81m and Oisin seventh with 17.48m while in the shot, Aaron threw 8.00m for seventh in the shot with Nathan 8th with 7.77m and Oisin 9th with 6.99m. In the Javelin, Aaron finished seventh with 25.95m while Oisin was eighth with 19.35m.

Lara Mulvaney Kelly was another busy thrower as the North Leitrim AC athlete finished eighth in the U16 Javelin with 22.74m and 12th in the Shot with 8.66m. Her young teammates Sara O’Beirne and Helen Verachtert finished 12th in the Discus (15.73m) and 10th in the Shot (7.25m).

Carrick AC had three other athletes in action - Eoghan Farrell finished just outside his pb in the U17 3,000m with 9.53.72 for ninth while Oisin O’Dowd was also outside his pb with 12.25 in the U19 100m. And Dara Holmes completed the programme with a throw of 18.41m to finish 15th in the Javelin.