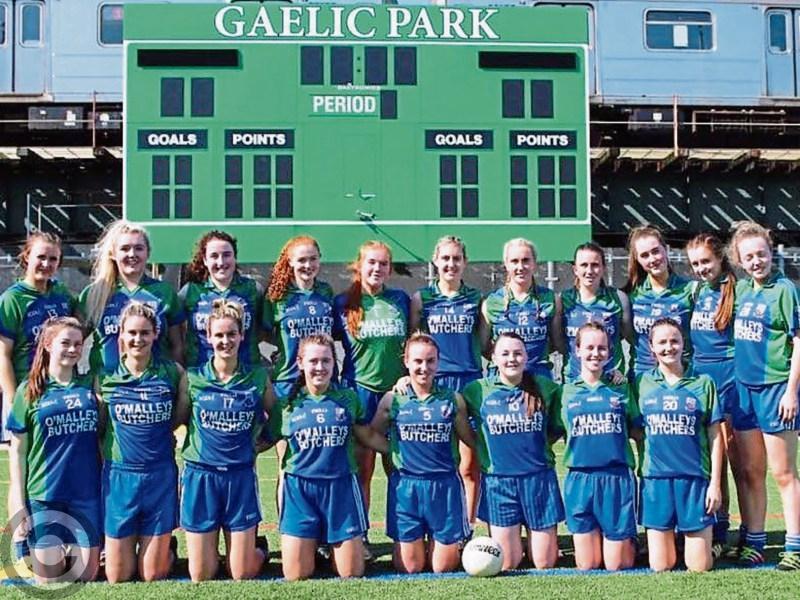 The St. Joseph's team, who started the defence of their Leitrim Senior title with an impressive win over Dromahair, pictured in Gaelic Park, New York earlier this year where they played New York

With Glencar/Manorhamilton recently claiming the Division 1 title, the battle for honours in the Senior Championship promises to be tougher than ever with five of the six teams probably feeling they have a great chance of winning the title.

However, St. Joseph’s showed they won’t let go of their crown too easily when they defeated Dromahair 2-15 to 4-5, a four point win over the north Leitrim side who had contested the Division 1 Final just a week before.

The Aughavas & Carrigallen side face Aughawillan next Sunday and can book their place in the semi-finals with a win over their old rivals but Aughawillan are never an easy opponent and will be hard beaten.

Kiltubrid may have lost their taliswoman in Aine Tighe, out of the rest of the year with a reported cruciate injury, but they still retain awesome firepower as they crushed the challenge of Oughteragh Gaels 3-13 to 0-6.

The Aughnasheelin and Sean O’Heslin’s amalgamation, who won last year’s Intermediate title, were unable to stay with the two time Connacht finalists. Kiltubrid face newly crowned League champions Glencar/Manorhamilton next Sunday in Leitrim Village in what is going to be a fascinating battle between an up and coming young team and an experienced outfit.

In a very evenly matched Intermediate Championship, St. Francis look like the early favourites as they stormed to a 3-13 to 1-7 win over Mohill, goals coming from Cavan star Ailish Cornyn as well as Ciara McTigue and Maeve Daly.

Having dropped back down from the Senior ranks, the Drumshanbo and Ballinaglera outfit are a formidable side but they will know there are stiff tests to come from Drumkeerin, Fenagh and last year’s Junior A winners Bornacoola St. Mary’s.

In the final Club Championship game of the weekend, Annaduff are looking to make it third time lucky in the Junior grade this year after losing finals to Glencar/Manorhamilton and Bornacoola St. Mary’s in recent years.

They started off with a huge 8-11 to 1-8 win over Keeldra Gaels which should be enough to book their place in the Final. The Cloone/Gortletteragh combination face Glencar/Manor’s second string next Sunday, needing a win to keep their championship alive.

The final round of Club Championship games in the Senior & Intermediate Championship falls on the August Bank Holiday weekend. As this clashes with the men’s senior championship and with pressure on venues, some games may be fixed for Friday, August 3, or Monday, August 6, depending on pitch and referee availability.