Goals do the trick for Eslin 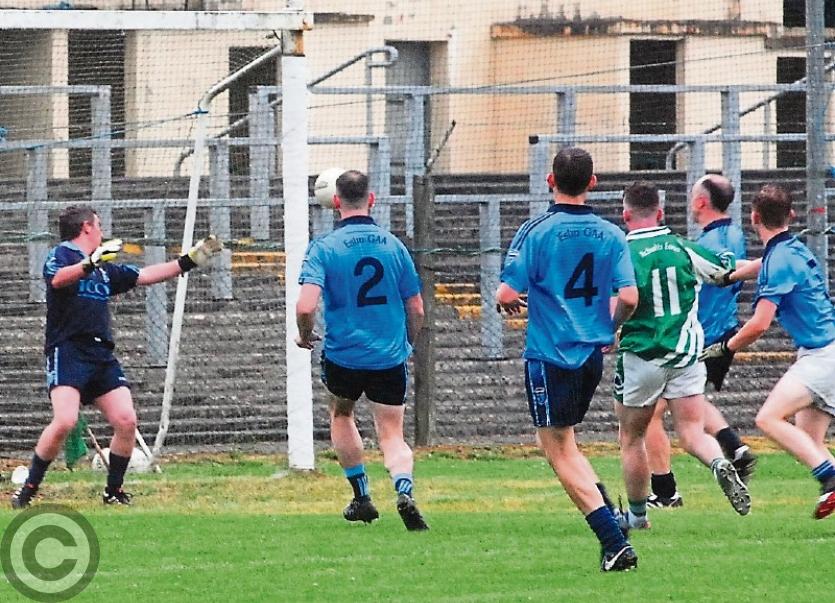 Goals are the beginning of the first and second halves gave Eslin a solid platform for victory in Saturday’s Swan Bar Division 3 final that was played in a drizzle in Páirc Seán Mac Diarmada.

Aughavas matched Eslin stride for stride in this contest and outplayed them in many phases of the game. But the men in Green and White were never able to peg back the huge advantage that Eslin gained early on thanks to their superior goal scoring power.

As early as the seventh minute Eslin had two goals on the scoreboard after Conor Beirne and Jamie Stenson, thanks to final passes from Niall Beirne fired past Aughavas goalkeeper, Fintan McBrien.

Aughavas opened their account in the ninth minute when Fintan Gallogly soloed 35 metres through the Eslin defensive cover to plant the ball in the net and wide of Eslin goalkeeper, Enda Turbitt.

David Charles reduced the deficit with Eslin further when put over an Aughavas point two minutes later. But Eslin hit back by the fourteenth minute with points from Conor Beirne (free) and Jamie Stenson.

After that Aughavas took complete control of the game for the remainder of the half and turned the tables on Eslin, whom they held scoreless in the period, and then went onto to grab a minimum lead by the halfway state.

Aughavas shot an unanswered 0 – 5 in this spell with Seamus Sweeney putting over four frees for them in succession while Sean McKiernan chipped with a point from play. Eslin trailed by 2 – 2 to 1 – 6 at the interval.

Eslin regained the lead in the opening two minutes of the second after James McNabola fired over a levelling point and Jamie Stenson fired to the back of the Aughavas net.

A spectacular thirty-third minute Conor Beirne goal when flicked on a hopping ball over the head of Aughavas goalkeeper, Fintan McBrien who was off his goal line, put Eslin further ahead.

Over the next three minutes Aughavas replied with two Seamus Sweeney points from play. Eslin had a let off shortly afterwards when a Fintan Gallogly Aughavas pile driver hit the crossbar and was cleared.

But Eslin kept up the pressure on Aughavas with Brian Higgins firing over a thirty-seventh minute point. Over the next two minutes Aughavas slightly reduced the deficit when David Charles and Seamus Sweeney (free) hit over a point each while shortly afterwards Eslin’s John O’Flynn received a yellow card.

Eslin once more turned up the pressure on Aughavas and increased their lead to 0 – 10 by the forty-ninth minutes after hitting an unanswered 1 – 4. In this spell sub Thomas Beirne fired home Eslin’s fifth goal while Conor Beirne shot two points (one from a 55 metres free) with Jamie Stenson (free) and Brian Higgins getting a point apiece.

Seamus Sweeney hit back with two Aughavas points from frees by the fifty-second minute. A minute later James McNabola got Eslin’s final score in the game when he split the Aughavas posts from play.

Aughavas finished with a mini flurry when they added three points to their tally with two coming from Seamus Sweeney free conversions and the other from a Fintan Gallogly goal chance that he drove the Eslin crossbar. Meantime Gallogly also received a yellow card in this period.

Eslin finished comfortable winners after outgunning an Aughavas side that conceded too many goals over the sixty minutes and failed to convert two good goal chances that came their during the course of the game.

Main Man: As well as being Eslin’s leading marksman Conor Beirne was the engine of his side’s dominant performance in the defeat of Aughavas, scoring 2-3. For Aughavas, Seamus Sweeney was their chief source of points with 11  over the hour.

Talking Point: Eslin’s capacity to hammer home goals at crucial stages of Saturday evening’s final in contrast to the Aughavas continual high point scoring rate, the battle between the difference approaches was a unique feature of this contest.

Turning Point: Goals in the space of a minute early in the second by Jamie Stenson and Conor Beirne put Eslin into a lead that a battling Aughavas side could not overturn.

Ref Watch: Letting the action flow at all time, Seamus Mulhern impartially administered this game that was played in a sporting manner throughout.

Highlight: A 47th minute Conor Beirne free from 55 metres out was the game’s outstanding score in clash that produced a number of other spectacular scores.

Lowlight: It was disappointing that there was no programme for Saturday evening’s Leitrim Division 3 League final. Apparently this was due to the failure of both clubs to furnish the necessary details to the Co. Board for the programme.