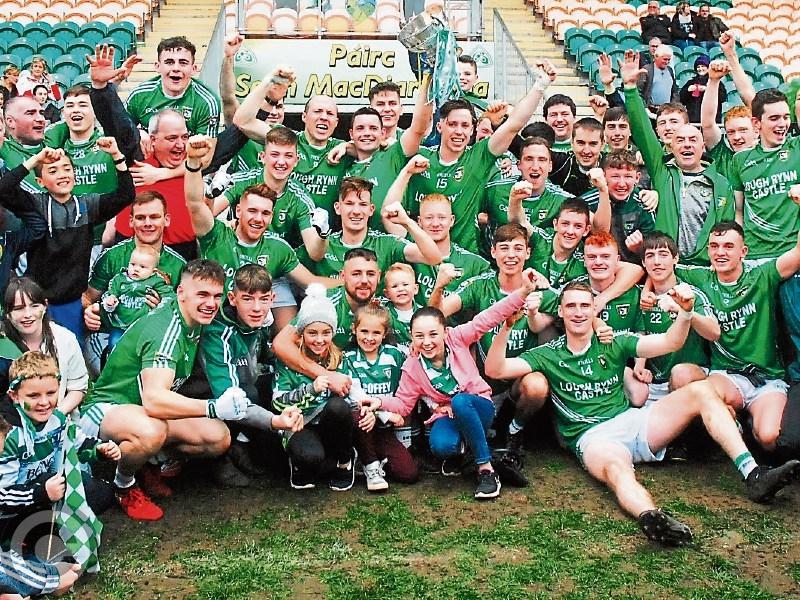 Mohill's players and fans celebrate after winning the Fenagh Cup in 2017 - the Mohill men will be among the favourites for the Connacht Gold Leitrim SFC title this year? Photo by Willie Donnellan

The work on the training field is done but now the real hard work begins as Friday night, July 28, sees the start of the 2018 Leitrim Club Championships.

Defending champions Mohill put their Connacht Gold Senior Championship crown on the line as they seek to land back to back victories while an intriguing Smith Monumentals Intermediate Championship sees five or six teams with genuine reasons for optimism.

We take a brief look at the games this weekend, having asked the clubs involved to let us know their thoughts.

Allen Gaels v Bornacoola: Friday’s clash of Allen Gaels and Bornacoola is an intriguing start to the championship, both are in Division 2 but the Drumshanbo men look the better equipped for the Senior Championship under manager Sean Pierson. Bornacoola will battle and Damian Moran, if he continues his county form, will be hard handled but you get the feeling the battles Allen Gaels have come through in recent weeks will stand to them - the Gaels to win.

Melvin Gaels v St. Mary’s Kiltoghert: This one could go either way as on their day, both teams are capable of anything. Melvin Gaels have potent attackers in Darragh Rooney and Cillian McGloin but St. Mary’s county duo Micheal & Nicholas McWeeney are formidable defenders. The Gaels gave the Carrick men a thumping early in the League, it will be closer on Saturday but a tentative vote for the Kinlough men.

Aughnasheelin v Glencar/Manorhamilton: Aughnasheelin make the step up to the Senior Championship and for last year’s Intermediate winners, it couldn’t get any tougher as they face what the majority of clubs believe are the favourites for the title in Glencar/Manorhamilton. Defeated just once in the League, the north Leitrim men are bidding to reach an incredible fourth final in a row and regain the Fenagh Cup. With new bosses Shane Ward & Kieran Fox at the helm, it is easy to see them do just that and they’ll start with a win here against an injury hit Aughnasheelin.

Aughawillan v Mohill: The battle of the last two champions is a mouth-watering clash for fans but it comes with a different feel this year. Aughawillan are struggling in the League and are not safe from the drop yet but when it comes to championship, there are few better at exceeding expectations. The defending champions are without former manager Padraic Davis as well as Ronan Gallagher and Darren McLoughlin but the influx of young players has probably left them stronger. If it is tight, you’d favour Aughawillan to sneak it but if Mohill get a run of scores, they can take off - Mohill to edge it.

Ballinamore Sean O’Heslin’s v Gortletteragh: This will be a lot tighter and a lot tougher than many people expect. Ballinamore will be missing some key players who are abroad travelling but such is their strength in depth that they are still in second place in the League. Gortletteragh will look to the mercurial Jack Heslin to take his Leitrim form into club action but it can’t be a one-man show, Heslin will need support and you feel that the greater resources of the Ballinamore men will do the job in the final quarter.

St. Patrick’s Dromahair v Drumreilly: Dromahair hammered Drumreilly in the League a couple of weeks ago so this should be fairly straightforward then? Not quite as there is a suspicion in the north Leitrim camp that Drumreilly were managing their scant resources, hit badly by injury as they are, and are preparing a major ambush this weekend. Drumreilly will be hoping that Conor Gaffney is somewhere approaching his best after injury knocked him out of the Roscommon, Louth and Monaghan games for Leitrim. On form you have to go with Dromahair but don’t be surprised if Drumreilly spring a surprise.

Cloone v Drumkeerin: Drumkeerin are one of the Intermediate championships great constants - always there and desperately unlucky not to get across the line. They are battling it out to avoid relegation in Division 1 but have been desperately unlucky in a few games and will be challengers for the title. Cloone are mid-table in Division 2, have a good run of form and an influx of some young players. But they have also lost four experienced servants so Drumkeerin are favoured for the win here.

Aughavas v Leitrim Gaels: Aughavas have been plying their trade in Division 3 this year with Leitrim Gaels mixing with the big boys in Division 1 so they have an advantage straight away. Last year’s defeated finalists will be on a mission to avenge that hurt and the addition of a young talent like Stephen Goldrick will add to their scoring threat, formidable as it already is. Aughavas will battle but you fancy that the Gaels are just too strong and too focused in this one.

Carrigallen v Kiltubrid: A game that really could go either way and you wouldn’t be surprised either way. On League form, Kiltubrid look to have an advantage as Carrigallen were battling relegation for much of the year, a late run of wins lifting them up the table. Kiltubrid were challenging early on but have probably turned their focus to the championship. Carrigallen won the League encounter by a point a few weeks ago, it will be that tight again but Kiltubrid may just sneak it.

Ballinaglera v Fenagh St. Caillin’s: On paper a pretty simple one even if they are both Division 1 sides. Ballinaglera have been relegated from the top flight while Fenagh, infused with an influx of really talented young players, are challenging for a place in the League Final. What stands out for Fenagh is their scoring power and while Ballinaglera will be tough, mean in defence and fully committed, they might just not have the scoring power to match the team who seem to be the slight favourites for the title.

Ballinamore Sean O’Heslin’s v Eslin: Eslin may be Division 3 but they should have far too much scoring power here for Sean O’Heslin’s second string. Ballinamore won’t know fully who have they have available until the match throws in but Eslin’s strength and scoring power with Conor Beirne gives them a huge advantage and in Martin McGowan, they have a shrewd experienced coach determined to get the best out of the enigma of Leitrim football. Eslin to win comfortably.

Mohill v Annaduff: Another second string team here but this is far from straightforward. Mohill’s second string came closest to defeating Aughnasheelin in last year’s championship and have lots and lots of talent at their disposal, all looking to impress the Senior management. But Annaduff look a steelier proposition this year - nobody doubts their ability but their confidence issues may have cost them in recent years. A battling draw last week against Dromahair hints that they may be gaining confidence and self-belief under Karl Foley so you have to fancy the newly promoted Annaduff to come through here with style.

SEE WWW.LEITRIMOBSERVER.IE FOR UP TO DATE NEWS FROM THE FIRST ROUND OF GAMES AND SEE NEXT WEEK'S LEITRIM OBSERVER FOR REPORTS