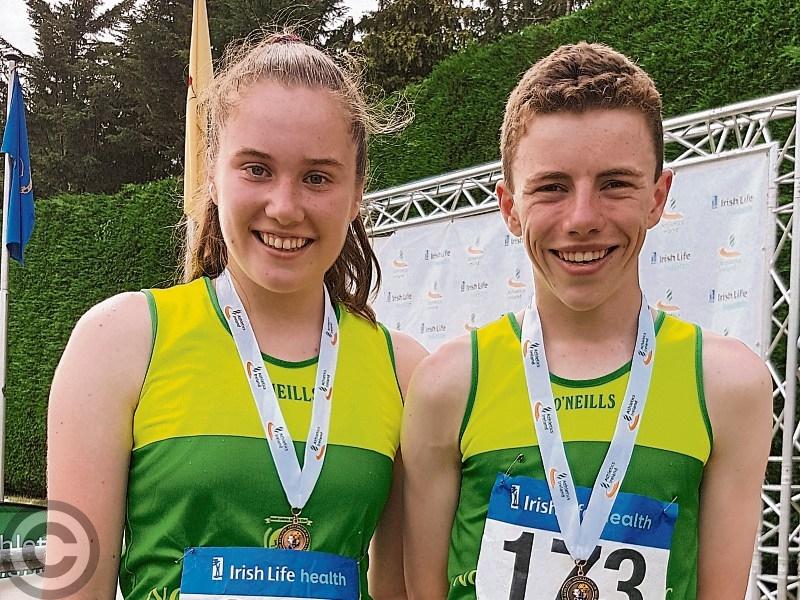 The North Leitrim club duo added to the medals won by teammates Niamh Carolan, Sara O'Beirne and Darragh Mitchell last week when they both won bronze medals in the U16 250m Hurdles races.

And there was a near miss for the Manorhamilton based club when Niamh Carolan finished fourth for the second year in a row over 1,500m, the athlete unlucky not to add to her walking gold and discus bronze she won a week earlier.

Ella McDaid started off the medal rush with bronze in the U16 250m hurdles. After winning her heat in the second fastest time of 38.47, the north Leitrim runner would have been confident of a medal in the final.

And that was how it turned out as Leevale’s Emily Wall sped to a 36.86 clocking to take the gold medal ahead of Niamh Corry of Annalee in Cavan who literally just pipped Ella on the line for the silver medal, clocking 37.60 to 37.62 right on the line.

Diarmuid Giblin quickly followed up with another bronze medal for North Leitrim as the Dromahair youngster finished second in his heat behind eventual winner Cian Dunne of DSD (35.01 to 35.53) with clubmate Darragh Mitchell also qualifying in third in his heat in a time of 38.17.

The Final went much faster with Dunne speeding to 32.72 with Nathan Fitzpatrick of City of Derry Spartans improving drastically from his third place in the heat behind Giblin to take silver in 34.30 with Diarmuid running 34.41, nearly two second clear of fourth.

North Leitrim’s Helen Verachtert also finished ninth in the U15 Javelin with a best of 21.17m having thrown 20.04 and 20.25 in her other efforts.

Leitrim had two competitors in the 200m races - Sophie McCabe finished ninth overall with a new personal best of 28.24 in her heat while Oisin O’Dowd ran 24.92 in the U19 heats.

That completes the Athletics Ireland Juvenile programme with just the National Community Games Finals in Limerick to come to finish off the track & field season for Leitrim's young athletes.