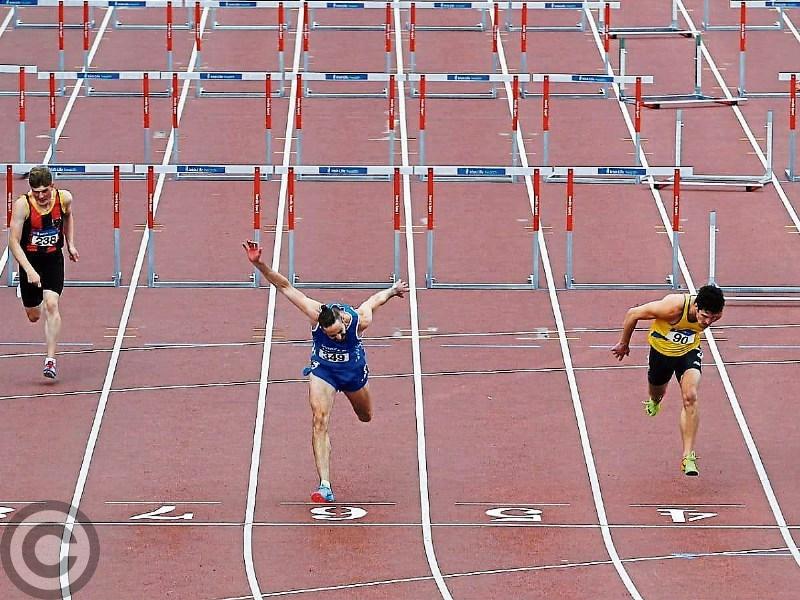 Gerard O'Donnell dips for the line ahead of Ben Reynolds. Photo by Sportsfile

In a bittersweet triumph, Gerard defeated long time rival Ben Reynolds from North Down for the first time when he stormed home in a time of 14.05 last Sunday.

Unfortunately, Gerard's season long pursuit of the qualifying time for next week's European Athletics Championships in Berlin fell just short of the 13.85 second B standard, with Reynolds, who achieved the standard last February, Ireland's sole representative in the event.

It means that Kinlough's Breege Connolly will be Leitrim's sole representative in the European Championships when she competes in the Women's Marathon on Sunday, August 12.

Despite a delay with a faulty start and then a false start as well as hitting the first hurdle rather heavily, the Carrick-on-Shannon athlete was away strongly in the Final in Morton Stadium last Sunday.

Isolated from leading contenders Reynolds and Matthew Behan by an empty lane, Gerard kept his composure and was always up with the faster starting North Down man before he produced his trademark strong finish.

Over the final three hurdles, Gerard moved into the lead to take the title by a tenth of a second in a time of 14.05 to Reynolds' 14.15 with Behan third in 14.37, leaving O'Donnell to retain his title for the first time and his third title in total.

Unfortunately, Gerard's clubmate Cathal McElgunn didn't have much luck as after running a time of 52.58 in the 400m heats on Saturday, he later discovered he was disqualified due to a lane infringement.