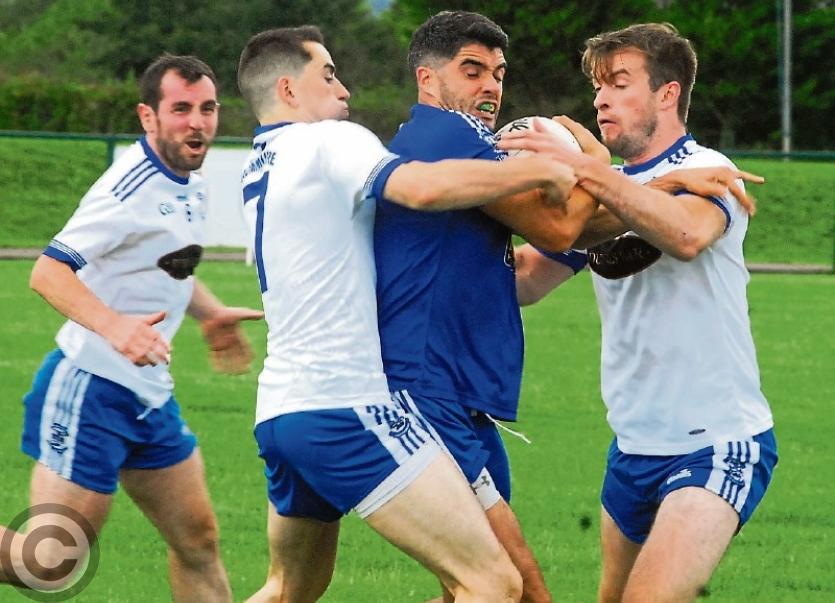 No way through for Emlyn Mulligan as he is surrounded by St. Mary's James Glancy, Nicholas McWeeney and Conor Farrell last Saturday. Photo by Willie Donnellan

St Mary’s Kiltoghert got their senior championship campaign up and running on Saturday last in Drumshanbo with what proved to be an easier than expected win over Melvin Gaels.

For much of the game there was little to separate the sides but the final 20 minutes proved to be relatively uncompetitive with Melvin Gaels seemingly happy to accept their fate, knowing there is still plenty of time to secure a place in the knock-out stages of the championship.

Injuries may have resulted in the Melvin Gaels’ challenge falling flat in the latter stages of the contest but that is not to take away from the Carrick men who were full value for their victory with the likes of Michael McWeeney, James Glancy, Michael Corrigan and Robert Lowe in what was a very efficient if not flawless team performance.

The one sided nature of the closing stages of the game was in stark contrast to the opening exchanges as it appeared as though Shane McGettigan Park would be treated to a classic. Alan Doherty and Emlyn Mulligan registered early pointed frees for the respective sides before Nicholas McWeeney struck for the first point from play after an excellent sequence of passing involving Ray Mulvey, Robert Lowe and Mark Diffley.

Melvin Gaels replied instantly with a fine score of their own. Leo, Philip and Colm McGowan were heavily involved in a quick and free-flowing move with Cillian McGloin playing the final pass to Emlyn Mulligan who applied the deadly accurate finish that he is renowned for.

An Emlyn Mulligan free, followed by a great individual point from Philip McGowan put the Kinlough men two to the good and even though Alan Doherty halved the deficit with a pointed free, it was the Gaels who were looking the better midway through the opening half.

Darragh Rooney added to the lead after a clever exchange of passes with Mulligan and moments later Mulligan punished St Mary's once more when he converted a free after Leo Ryan was fouled.

However, the final 10 minutes of the half saw St Mary's up their intensity and a Mark Diffley pointed free was followed by two fine scores from Ray Mulvey to ensure there was nothing between the sides at the interval.

The loss of David McSharry to injury was a blow for Melvin Gaels but with the sides level at six points apiece as the second half got underway. Robbie Lowe edged St Mary's back in front before Mulligan replied with an excellent point in a game that appeared as though it would go right to the wire.

Alan Doherty edged St Mary's back in front with a converted free but seconds later St Mary's were thanking their goalkeeper, Conor Glancy, who made an excellent save to deny Daithi McGloin.

That proved to be a significant moment as St Mary's struck two without reply through Robert O'Donnell and Gary O'Daly.

Melvin Gaels looked in trouble but they replied well with Darragh Rooney and Mulligan (free) registering points in quick succession to leave just a point between the sides with 13 minutes remaining.

The grandstand finish that seemed to be on the cards failed to materialise as St Mary's took complete control around the middle of the pitch while the intensity that Melvin Gaels had displayed in was absent in the latter stages.

Five unanswered points from Alan Doherty (three, one free), Robert O'Donnell and Ray Mulvey completed the scoring and they were also denied a late goal when Brian O'Donnell shot straight at Jessie McGuinness.

St Mary's will be happy with their opening day win but expect Melvin Gales to improve in the weeks to come and both sides remain forces to be reckoned with.

Main Man: It was an efficient team performance from St Mary's with  James Glancy leading by example from centre-back while full-back Michael McWeeney did an excellent job keeping his county teammate Darragh Rooney quiet and Alan Doherty was deadly accurate in front of the posts.

Talking Point: The complaint voiced by many that there are too many group games was highlighted on Saturday evening as there was a noticeable lack of intensity in the closing stages with Melvin Gaels seemingly happy to turn their focus to the challenges to come.

Turning Point: Seven minutes into the second half Conor Glancy made a fine save to deny Daithi McGloin.

Ref Watch: Patrick Guckian drew the ire of the Melvin Gaels players when he disallowed a goal, bringing play back for a Melvin Gaels free. However, the decision had no bearing on the final outcome as it arrived four minutes into injury time when there was six points between the sides. Otherwise Guckian handled matters well and was in control throughout.

Highlight: There were some excellent scores over the course of the game from Emlyn Mulligan and Philip McGowan  for Melvin Gaels while the pick of the scores came from St Mary's Gary O'Daly who judged the wind to perfection as his shot flew between the uprights.

Lowlight: A lack of a competitive feel to the closing stages was the only real complaint.