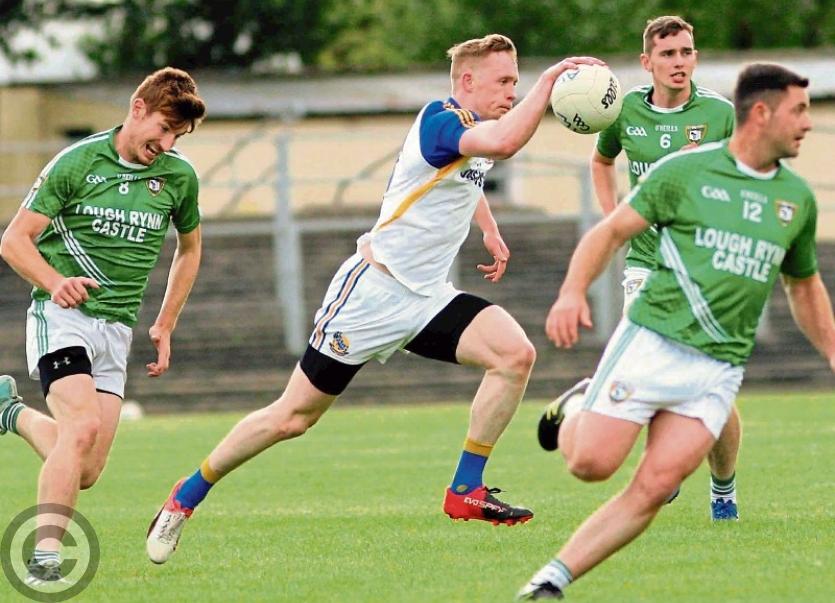 In what was the battle of the champions of the past two years, reigning champions Mohill just edged out the 2016 winners Aughawillan in the last ten minutes of a pulsating clash on Saturday evening.

This was a tit for tat showdown for almost eighty percent of the action. But in the crunch and final 20 percent of the proceedings it was Mohill who had more fuel in the tank to drive home decisively for a fully merited win despite the never say die battling qualities of Aughawillan.

Undoubtedly Mohill possessed the greater firepower. No less than eight Mohill players got on the game’s score sheet over the course of the game. In contrast Aughawillan depended on three of their players to deliver all their scores, namely, Gary Plunkett, Morgan Quinn and Sean Flanagan.

What probably turned the tide for the Mohill in this encounter was their superior ability to play an effective fast moving and expansive brand of football against a tight marking and well marshalled Aughawillan outfit.

Aughawillan slightly outgunned Mohill in the opening 20 minutes. In this spell Gary Plunkett fired over two points while Morgan Quinn and Sean Flanagan chipped in with a point apiece.

Mohill stayed right in contention with Domhnaill Flynn, Alan McLoughlin and Shane Quinn splitting the Aughawillan uprights with a score each.

The Mohill men got on level terms when Flynn tapped over a 20th minute free. Four minutes later Ronan Kennedy put Mohill in front when he fired over .

Morgan Quinn levelled the proceedings when put a 27th minute free on target. But Alan McLoughlin edged Mohill back in front with a point from play to give his side a slight 0-6 to 0-5 interval advantage.

Aughawillan got back on level terms in the opening minute of the second half thanks to Gary Plunkett who fired over the crossbar.

But Mohill regained the lead within the space of 60 seconds after Evan Harkin fisted the ball over the crossbar. Harkin’s score came after a fine individual effort on his part when he dashed into an open space and soled through at pace from the 45 metre line.

McLoughlin extended Mohill’s lead to three points when he shot over two 37th points in quick succession. Over the next four minutes points from frees were traded by Morgan Quinn for Aughawillan and Ronan Gordon for Mohill.

Aughawillan surged as the third quarter came to close and grabbed the lead. Initially Gary Plunkett reduced the deficit two points when fired over a point.

Shortly after Plunkett put Aughawillan back in the lead for the first time in 26 minutes when he hammered his effort past Mohill net minder, Padraig Tighe.

But Mohill responded positively and got to get back on level terms almost immediately when Sean Harkin soloed through the Aughawillan cover to shoot a well taken forty-seventh minute point.

The Mohill men regained the lead in the following minute when the highly experienced Daniel Beck calmly fired over a point. This score got Mohill’s nose in front at a crucial stage.

Ronan Kennedy increased Mohill’s advantage to two points in the following minute when he whipped over a point.

Sub Barry Lupton became the second Mohill player to be yellow carded in the space of three minutes when referee Seamus Mulhern issued his fifty-third minute reprimand to Lupton.

In the closing scoring action of the game Mohill made the win secure when Alan McLoughlin hit two points on the trot.

GAMES AT A GLANCE

Main Man: While he received great support from several other team mates, Alan McLoughlin was very much the engine of Mohill’s hard fought battle that ultimately led to an important opening championship campaign win over their  Aughawillan.

Turning Point: After Aughawillan had taken a one point lead midway through the second half, Sean Harkin stepped up for Mohill  and shot a levelling point that turned the tide for his side.

Highlight: Evan Harkin’s early second half point for Mohill came after a fine piece of ball carrying by him and also put his side back in front after Aughawillan had got on level terms

Lowlight: It was a true championship favoured knife edged contest for most of the action and low points in it were rare. There was a reasonable attendance of both Club’s supporters but overall quite a small crowd, which perhaps was disappointing.