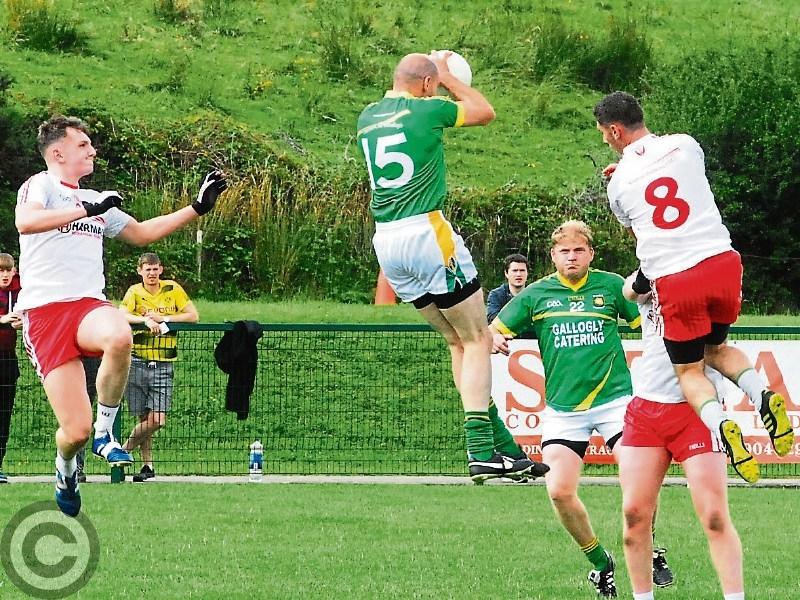 A flying Declan Maxwell makes a spectacular catch for Drumreilly against Dromahair. Photo by Willie Donnellan

After suffering a 19 point defeat in the League just two weeks ago, Drumreilly stunningly turned the tables on Dromahair to record a massive Senior Championship win in Drumshanbo.

Drumreilly used their vast experience and know how in the closing stages of the second half to put a young Dromahair side to the sword. Early in the second half Dromahair enjoyed a six point advantage and it seemed as if Drumreilly was dead and buried at this juncture.

But then, Phoenix like, Drumreilly came alive and turned the tables completely on Dromahair, who only managed to score a solitary point in the final 20 minutes. Drumreilly, led by Jimmy Holohan and Ollie Maguire in particular, shot 2-6 and blasted Dromahair’s challenge completely out of the water.

Dylan Maguire opened Drumreilly’s account with the game’s first score on two minutes. Dromahair responded impressively when Gary Fowley fired to an empty net a minute later after getting behind the South Leitrim side’s defence.

Nigel Maguire reduced Dromahair’s lead to the minimum when he put over a sixth minute Drumreilly free. Drumreilly had a let off a minute later when Gary Fowley drove a clear cut Dromahair goal chance inches wide across the face of the goalmouth.

Drumreilly got on level terms when Jimmy Holohan hit over an eight minute point but Dromahair regained their lead a minute later when Martin Feeney tapped over a free. Cian Clinton extended the lead within two more minutes when he hit a point from play for the North Leitrim men.

Ollie Maguire narrowed the deficit with Dromahair for the Drumreilly men to the minimum, when he put over a twelfth minute free.

Dromahair had a let off two minutes later when their goalkeeper, Jack Burke was forced to make a smart save from a point blank Damon Maguire shot. The sides were back on level terms when Declan Maxwell shot a point at the end of the first quarter.

Drumreilly got back in front a minute later when John McKeon surged forward from his fullback berth and shot a point. But Martin Feeney put Dromahair back on level terms when he popped over a point from play.

The tit for tat nature of the scoring exchanges continued with Drumreilly’s Nigel Maguire edging his side back in front with a 20th minute free.

Maguire repeated the exercise four minutes later to put Drumreilly two points to the good. Shortly afterwards Drumreilly goalkeeper, Michael McGirl was forced to pull off a goal denying save from a Terry O’Rourke shot.

Shane Fowley cut Drumreilly’s lead to the narrowest of margins when he fisted over a 28th minute point. Dromahair regained the lead before the break when Cian Clinton drove to the net after being put through by Terry O’Rourke at the end of a well orchestrated move.

When the halftime whistle sounded Dromahair had a 2-4 to 0-8 lead over Drumreilly. After the restart Dromahair completely dominated and increased their lead to six points as Martin Feeney shot two points while Cian Clinton (free) and sub Mark Magee added a point each.

Then, somewhat against the run of play, Jimmy Holohan shot a 30th minute goal after being put through by Conor Gaffney.

The Dromahair lead was cut to the minimum over the next six minutes after Nigel Maguire hit over a Drumreilly free and Peter Prior added a point from play. Then Martin Feeney stymied the Drumreilly fight back slightly when he converted a 53rd minute free but this proved his side’s last score.

The turnaround in the game occurred when Ollie Maguire flicked home a 54th minute Drumreilly goal after Damon Maguire sent a ball from outfield into the Dromahair goalmouth.

Drumreilly added to their lead over the following four minutes when Conor Gaffney, Francis Holohan, Jimmy Holohan and Nigel Maguire (free) added a point each to their side’s tally.

Main Man: Jimmy Holohan was perhaps the lynch-pin of Drumreilly’s win in this game. Holohan was involved at crucial phases of the game in initiating moves that turned the tables on Dromahair while he also scored Drumreilly’s first goal.

Talking Point: After making a bright second half start and going ahead by six points Dromahair then unexplainably completely capitulated to Drumreilly, who ran out with a clear cut five point win.

Ref Watch: Kevin Mallon officiated with firmness and fairness during this encounter and consulted assuredly with his linesmen and umpires whenever necessary to do so.

Lowlight: Dromahair’s inability to lift their game in the final twenty minutes of the action was disappointing as Drumreilly surged decisively to turn the tables on the north Leitrim men.