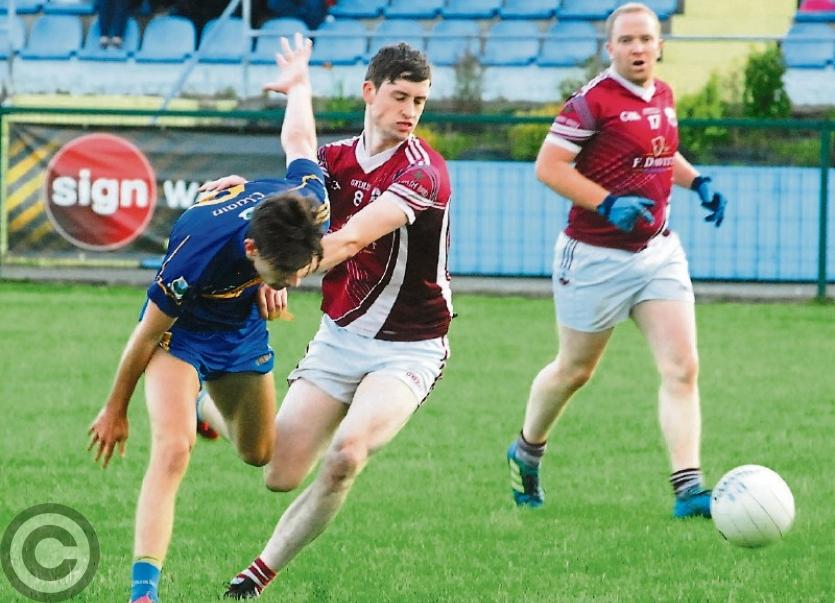 Out of the way! Drumkeerin's Declan Daly makes his presence felt to Cloone's Eoghan Keegan during last Saturday's clash in Drumshanbo. Photo by Willie Donnellan

After suffering more than their share of heartbreak in recent years, Drumkeerin made a winning start to this year's campaign as they saw off the challenge of Cloone in Shane McGettigan Park, Drumshanbo on Saturday.

The success was built on a very solid showing from the half-back trio of Colm Clarke, Jason Byrne and Daragh Flynn who were disciplined in defence and an excellent outlet when attacking the Cloone defence at pace.

Drumkeerin flew out of the traps with a Darragh Flynn free followed by a monstrous effort from Paddy McHugh from in excess of 45 metres. It should have got even better for a rampant Drumkeerin but James Gallagher was denied a goal by a wonderful save from Ciaran Casey who got down low and at full stretch to get a hand to the shot.

Within a minute Gallagher had another sight of goal when he capitalised on a defensive mistake but again he was foiled by Casey who did just enough to divert the shot into the side netting. After a very slow start Cloone got up and running in the 11th minute when Damian O'Donnell converted a free and within a minute they were level when Darren Carberry pointed from another free.

Drumkeerin regained control with a point from Cathal McCauley, who was excellent throughout but they were once again shown to be wasteful in front of goal as two further goal chances came to nothing. James Gallagher was off target with a shot after a short kickout went badly wrong while Jerome Maguire was denied by Ciaran Casey who stood tall to make a good save.

Cloone punished Drumkeerin for those misses with Adrian Nicholl pointing after evading the attention of Drumkeerin goalkeeper Kevin Forde but he really should have found the net. Moments later Cloone took the lead for the first time when Niall Quinn struck from a huge distance for an excellent point.

Cathal McCauley replied with a pointed free for Drumkeerin but that was quickly cancelled out by another fine point from Cloone's Niall Quinn.

With seven minutes of the half remaining Cloone were dealt a real blow when Quinn, who was beginning to assert himself on the contest, was shown a black card for a trip.

Drumkeerin capitalised on Cloone's misfortune five minutes before the interval when they struck for goal. Colm Clarke pounced on a loose ball and surged through the middle before releasing James Gallagher who then played the ball across goal to Cathal McCauley who got the decisive touch to force the ball to the goal.

Cloone finished the first half scoring with a Darren Carberry pointed free meaning Drumkeerin enjoyed a 1-5 to 0-6 lead at the break.

The deficit was reduced to the bare minimum when Damian O'Donnell converted a free after the restart but four unanswered points from Cathal McCauley (two frees and one from play) and Paddy McHugh saw Drumkeerin open up a five point lead.

The intensity of the game dropped considerably for the remainder of the contest although Cloone were unlucky not to goal when Darren Carberry reacted quickest to a shot that came back off the post but his delicate flick was denied by the crossbar.

Cathal McCauley extended Drumkeerin's lead although to their credit Cloone finished strongly. However, late points from Derek O'Donnell and Eoghan Keegan proved to be no more than a consolation.