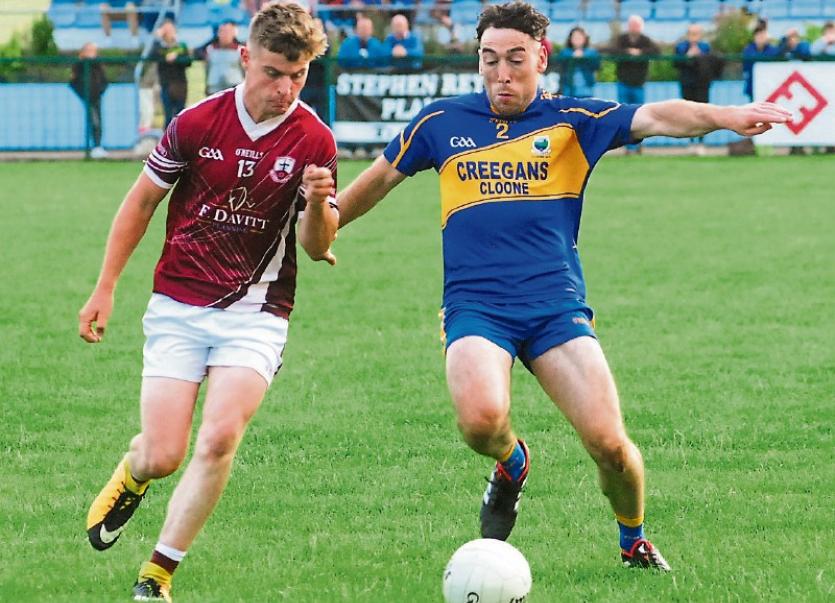 Fenagh St Caillin's illustrated why they are many people's favourites for the Smith Monumentals Intermediate Championship title when they recorded an emphatic victory over Ballinaglera in Ballinamore on Saturday evening last.

Flying high in Division 1, Fenagh St Caillin's were always expected to be too strong for Ballinaglera who were recently relegated to Division 2 but the comprehensive nature of their victory will nevertheless have raised eyebrows.

It was clear from early in the game that Fenagh would be too strong for Ballinaglera as they raced into a 1-3 to no score lead midway through the opening half.

By the time the half-time whistle had sounded that lead had been further extended with St Caillin's enjoying a 3-4 to 0-1 lead at the interval over their neighbours.

Fenagh showed no sign of easing up as they continued to dominate matters after the break hitting a further 1-5 to Ballinaglera's 0-2 in the opening 15 minutes of the second half.

The full-time whistle brought confirmation of what had long been evident on the pitch as Fenagh emerged triumphant on a scoreline of 5-14 to 0-4.

Next up for Fenagh is an encounter with Cloone in Ballinamore on Saturday while Ballinaglera will be looking for an improved performance when they face Leitrim Gaels, who easily accounted for Aughavas, this Friday evening in Cloone.

Annaduff made an impressive start to life in the Intermediate Championship after the disappointment of relegation last year and their quest to bounce back at the first attempt got off to the perfect start when they got the better of Mohill's second strong on Sunday afternoon last in Cloone.

Annaduff started brightly and raced into a 0-5 to 0-1 lead although Mohill regrouped well and there was just two points between the sides with four minutes of the first half remaining with Annaduff leading 0-5 to 0-3.

However, in the closing stages of the half Annaduff went for the jugular as they scored 1-3 without reply to enjoy a commanding 1-8 to 0-3 lead at the interval.

Mohill registered the opening score of the second half but Annaduff soon regained control of the contest as they registered four unanswered points to open up a nine point lead.

The sides then exchanged two points each before Annaduff went on to take complete control of proceedings for the final 20 minutes as they registered nine points without reply to emerge victorious on a scorelines of 1-22 to 0-7.

Annaduff's bid for an immediate return to the senior ranks of championship football continues on Sunday next when they face Ballinamore in Carrigallen.

Mohill on the other hand will be hoping to register their first victory of the campaign when they face local rivals Eslin in Fenagh on Sunday.

However, they will be all too aware of the size of the task awaiting them as their neighbours had an impressive victory over Ballinamore's second team in Pairc Sean on Sunday and they have won 10 of their 11 games in Division 3 this year while Mohill's second team have struggled near the foot of Division 2.

ESLIN & KILTUBRID UP AND RUNNING WITH GOOD WINS

Eslin and Kiltubrid scored important wins in the first round of the Smith Monumentals Intermediate Championship last weekend to get them off to a perfect start and are already halfway to reaching the Quarter-Finals.

Both teams are behind Group 1 leaders Annaduff by virtue of scoring difference but with two second string teams in this Group, both Eslin and Kiltubrid could actually book their place in the  knockout stages if they overcome second string opposition in round two this weekend.

Newly crowned Division 3 champions Eslin started their campaign off with a comfortable win over Ballinamore Sean O’Heslin’s second string last Sunday in Pairc Sean Mac Diarmada, winning by nine points on a scoreline of 2-16 to 1-10.

Much of that lead was established early on as Eslin stormed into a 1-4 to 0-3 lead and although Ballinamore improved to trail by 1-6 to 0-5 at the break, the second half saw Eslin continue to put daylight between them with another early goal in the second period.

Eslin stretched the lead to ten points at one stage before Ballinamore pulled back a goal and although O’Heslin’s would add three more points before the final whistle, Eslin would hit five points to ensure a comfortable winning start with a clash against neighbours Mohill to come next Sunday.

Victory in that game would almost certainly ensure Eslin’s place in the quarter-finals and all without having to play a first string team!

Carrigallen took just a minute to open the scoring from a 45 but Kiltubrid slowly took over with points from Stephen McLoughlin and Kealan McKeon inside ten minutes. Then former County player Emmett Mahon took over, scoring 1-2 over the next 10 minutes before Carrigallen pulled back a point from a free.

With seven minutes of added time, Kiltubrid made good use of the extra time with Kealan McKeon (2) and Mick McCormack pointing to give them a 1-7 to 0-2 halftime lead.

Carrigallen were a different side on the restart and two points inside the first two minutes got them up and running. A Mickey Earley score helped Kiltubrid but Carrigallen hit three unanswered from play to cut the gap to four points.

But a Mahon free and a goal from James Gill halted Carrigallen’s comeback in its tracks and although they had two late points, it wasn’t enough to stop Kiltubrid from scoring a 2-9 to 0-9 victory.

Kiltubrid move on next Sunday  to face Ballinamore Sean O’Heslin’s second string in Cloone and while they will be far from cocky, a win here and an Eslin win would leave the two second string teams without any wins and still to face Annaduff and Carrigallen in the rest of the competition, almost certainly ensuring a place in the quarter-finals for Eslin and Kiltubrid.

Four points is usually considered enough to reach the quarter-finals and the fact that you can reach them with two wins out of five games is one of the flaws in the system, a flaw exacerbated as Group 2 has no second string teams while both Ballinamore and Eslin are in Group 1. Something more to consider for clubs at the end at the year.