Three races in one at Ballinamore Festival! 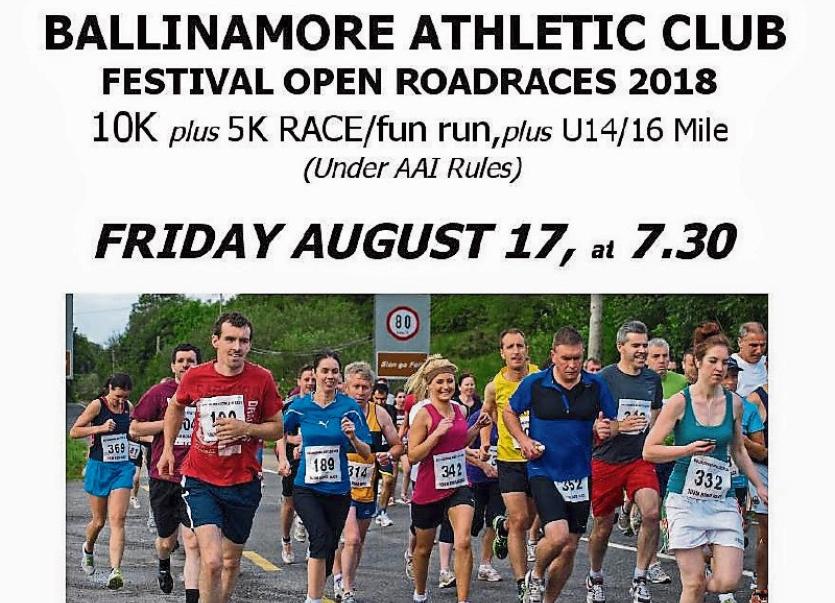 Runners will get plenty of value for money next Friday when Ballinamore Athletic Club hosts their annual Festival Road Races with three races on offer for the running enthusiast.

Friday evening will see runners sprint off down the road at 7.30 pm when the popular annual Ballinamore Festival Road Races, under AAI Rules, will take place with registration in the Den beside the Sports Hall from 6 pm.

This event caters for all age groups as there will be an U8 300m, an U10 500m and an U12 600m on the adjacent St Felim’s Playing area at 6.30pm open to all comers with alternative arrangements at the Sports Hall if weather is inclement.

The Open 10K will travel the usual route along the Canal and will return to the finish at the Primary School along the Carrick on Shannon road. Participants are required by AAI Rules to be over 18.

The 5K goes out the Carrick-on-Shannon road to the turning point and then comes back to the finish. This race also attracts a good number of fun runners, joggers and walkers.

This year, there is an additional race included with the other two. A mile, open to younger athletes with awards for U16 and U14, will be held at the same time and along the same course. It will also give younger runners the opportunity of getting an official time for that distance and all three races will travel together through the town.

The usual prize list includes spot prizes open to all who finish the course and all 10K and 5K competitors receive the usual special t shirts with medals for the younger age groups. Among the prizes will be one for anybody who breaks a Course Record. The current Course Records are:

Colin Griffin, who hopes to compete on Friday, finished tenth in a time of 72.58 in the Dublin RocknRoll Half Marathon which incorporated the AAI National Championship over a tough course in the Phoenix Park and Kilmainham on Sunday last. He was also fourth in the Over 35 section.