St Mary's and Manor lead the way to last eight 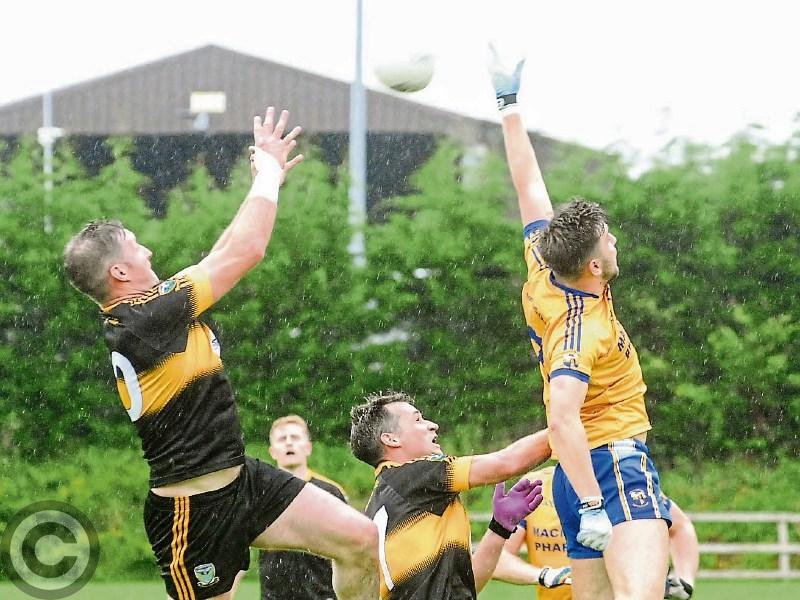 Bornacoola's Michael Duignan pictured about to make an aerial catch during last Saturday's match against Glencar/Manorhamilton. Photo by Willie Donnellan

Glencar/Manorhamilton and St Mary's Kiltoghert are the only teams whose perfect record after three games in the Connacht Gold Senior Championship remains intact but the big story from last weekend was the defeat of Mohill by Gortletteragh in Cloone on Saturday evening last.

Mohill were red hot favourites to emerge victorious but two Gortletteragh goals were enough to help them claim a 2-12 to 0-15 win.

Ballinamore took full advantage of Mohill's misery as they comfortably saw off the challenge of Dromahair to claim top spot in Group One.

Saturday's game in Pairc Sean Mac Diarmada saw Mohill race into a comprehensive lead by the time Dromahair had opened their account in the 20th minute.

Ballinamore maintained control of the contest until the end and emerged victorious on a scoreline of 4-11 to 0-8.

Aughawillan are also on course for a place in the last eight after an impressive 0-21 to 3-6 win over Drumreilly last Friday night in Cloone.

With two games remaining a clear picture is starting to emerge with just two points separating the top four of Ballinamore, Mohill, Aughawillan and Drumreilly.

Gortletteragh's win sees them move on to two points and with games against Dromahair and Drumreilly still to come they will believe they can cause a shock and claim a place in the quarter finals.

The next round of games on the weekend of August 26 will see Gortletteragh play Dromahair, Mohill will face Drumreilly and Ballinamore will lock horns with Mohill.

In Group Two of the Senior Championship, Glencar/Manorhamilton and St Mary's Kiltoghert have secured their place in the quarter-finals with two group games remaining with a fascinating race developing to secure the final two places in the knock-out stages of the competition.

Glencar/Manorhamilton proved too good for Bornacoola as they triumphed on a scoreline of 2-22 to 0-10. St Mary's also registered their third win in as many weeks when they got the better of Aughnasheelin in Drumshanbo on Saturday evening last.

Aughnasheelin proved to very competitive and it was only a Nicholas McWeeney goal midway through the second half that gave St Mary's some breathing room before they claimed a 1-11 to 0-7 win.

Allen Gaels recovered from the setback of defeat to St Mary's to defeat Melvin Gaels last Sunday in Ballinamore, 0-13 to 0-10. Melvin Gaels surprisingly remain without a point and will be hoping to get back on track when they face Bornacoola, who have also lost all three games to date, in the next round of fixtures.

The top two in the group St Mary's and Glencar/Manor will go head to head in what promises to be an intriguing encounter while Allen Gaels and Aughnasheelin will do battle with both sides knowing a place in the last eight is within reach.