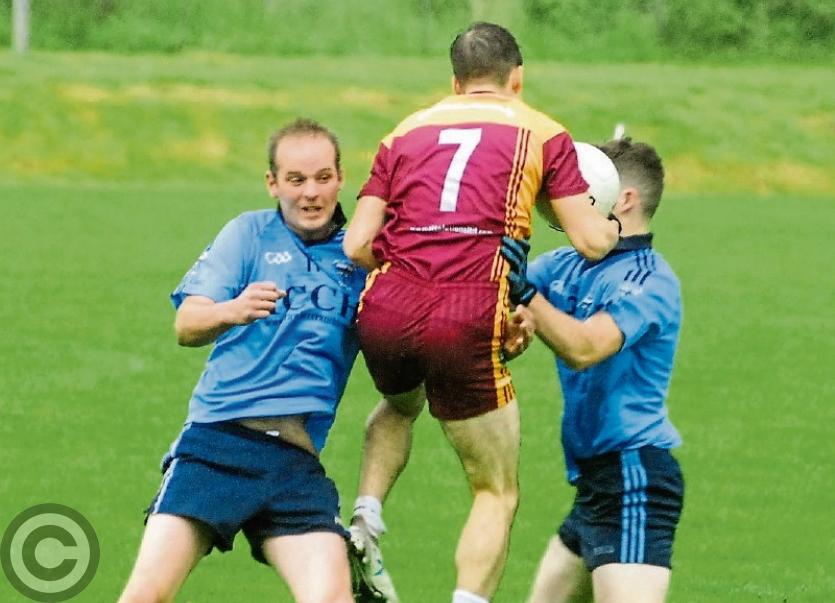 Dean Gill is pictured trying to break free of the attention of two Eslin players last Saturday in Ballinamore. Photo by Willie Donnellan

Eslin maintained their undefeated run at a damp Ballinamore on Saturday when putting their undefeated Annaduff opponents to the sword with three points to spare at the end of a competitive and hard fought contest.

The Eslin men trailed by two points at the break but upped their game to come from behind in the second half and see off the Annaduff challenge.

Goals definitely won this game for the Eslin men. They netted three in total when inflicting serious breaches in their opponent’s defensive systems.

Although Annaduff registered three more scores than Eslin (11 as against 8), the quality and value of Eslin scores certainly proved to be the difference between the sides when the final whistle sounded.

A unique feature of this game was that Conor Beirne accounted for Eslin’s entire tally with the exception of one score, which he acted as provider for Jamie Stenson's goal.

Without doubt Beirne held the key for Eslin win, as his scores made victory a bridge too far for a battling Annaduff side that fought right onto a disappointing finish for them.

Beirne drew first blood of the action with a point from a second minute free, Annaduff levelling when Eoin Gill fired over from play.

The stalemate continued with Alan Glancy and Conor Beirne swapping points. Sub Sean McNabola put Annaduff back in front on the 17 minute mark when he split the Eslin posts. But Eslin regained the lead within the space of a minute when Jamie Stenson drove to the Annaduff net after being put through by Conor Beirne.

Annaduff fought back to level the game by the twenty-eight minute with a well take Ronan McCormack point and a Kenny Cox free conversion.

Conor Reynolds put Annaduff ahead for the first time in 12 minutes when he fisted over a point. Alan Clancy tapped over an Annaduff free just before the break to put his side in front by 0-7 to 1-2 at halftime after Eslin had failed to score in the last 14 minutes of the first half’s action.

In the opening six minutes of the second half Eslin made amends for their first half scoring drought with Conor Beirne hammering home a goal, as well as adding a point from play before his strike and converting a free after it.

David Stenson became Eslin’s third player to see a yellow card in the 48 minute. Conor Beirne edged Eslin into a five point lead when he fired home his second goal in the contest five minutes later.

Annaduff battled back over the next seven minutes and cut Eslin’s lead to two points, Sean McNabola scoring from play and two frees while Eslin sub Brian Higgins received his marching orders for a red a card offence while Annaduff’s Ronan McCormack also saw yellow.

Before the end Conor Beirne completed the scoring with a point from a free .