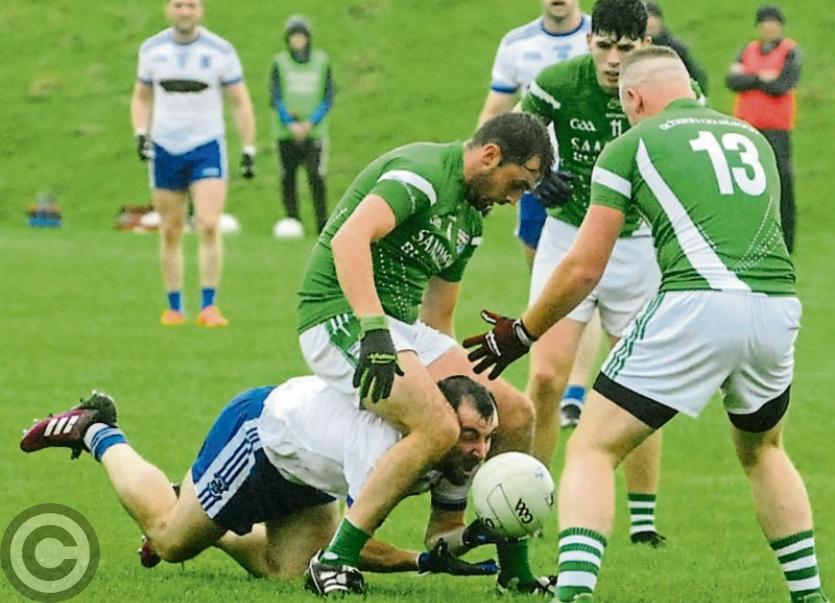 St. Mary's James Glancy finds himself in a tight spot as he is challenged by Aughnasheelin's Barry McWeeney last Saturday in Drumshanbo. Photo by Willie Donnellan

St Mary's Kiltoghert maintained their 100% record in this year's Connacht Gold Leitrim Senior Football Championship on Saturday evening last when they got the better of Aughnasheelin in Shane McGettigan Park, Drumshanbo.

Having impressed a week earlier when they defeated Bornacoola, Aughnasheelin more than played their part in what proved to be a very competitive encounter with St Mary's pulling away in the closing stages of the game.

It was only when Nicholas McWeeney struck for goal in the 43rd minute that the Carrick-on-Shannon side were able to establish a four point lead that ultimately put them in a position to secure victory.

While Aughnasheelin deserve much credit for their performance, it was the efficient and effective display from St Mary's that was the main talking point from Saturday's game.

St Mary's have been quietly going about their business in the opening weeks of the Championship with a number of standout performances throughout the pitch.

St Mary's signalled their intent inside the opening two minutes when David Tiernan, Daire Farrell, Conor Farrell and Gary O'Daly linked up brilliantly before O'Daly was fouled and Alan Doherty slotted the resulting free over the bar for the game's opening score.

The lead was doubled shortly afterwards when Brian O'Donnell pointed after a fine counter-attacking move that began with a superb tackle from Micheal McWeeney deep in his own half.

Aughnasheelin's first sight of goal arrived in the sixth minute with Gavin Sammon doing well to get in front of his marker before shooting, first time, over the bar.

Aughnasheelin drew level in the 12th minute when Fintan Fitzpatrick found himself in more space than he could have expected. Fitzpatrick could have advanced closer to goal but he showed plenty of confidence as he struck decisively from distance.

Barely a minute later it got even better from an Aughnasheelin point of view. Brendan Mulvey and Sean McWeeney were both heavily involved in a patient build-up that culminated in a fine finish from Damian Gilheaney.

St Mary's responded impressively to the Aughnasheelin pressure and replied with three points of their own.

First of all Gary O'Daly cut in off the left wing before dissecting the uprights and that was followed by a wonderful strike with the outside of his left boot by Alan Doherty.

The lead was increased to two points in the twenty first minute when Michael McWeeney, who started the game very impressively from full-back, advanced further and casually dispatched his shot over the bar from over 40 metres.

The first half scoring was completed in injury time when Gavin Sammon was found in space following a quick free and he showed great composure and accuracy to score from a difficult angle.

One of the key features of the Aughnasheelin performance during the opening half was how effective they were at making space and finding players in green and white from their own kick-outs.

Aughnasheelin trailed 0-5 to 0-4 as the second half got underway but within two minutes of the restart they were on level terms courtesy of a fine strike from the impressive Ciaran Cullen.

St Mary's hit back with an Alan Doherty point after Daire Farrell and Daniel Lowe did well to create the opportunity.

Barry McWeeney and Alan Doherty exchanged pointed frees in what was proving to be a very competitive encounter.

With 17 minutes remaining on the clock St Mary's struck for what would prove to be a decisive goal with Nicholas McWeeney firing a shot past Gavin McWeeney.

The scoring rate dropped considerably in the closing stages as the game threatened to become very scrappy.

That would prove to be Aughnasheelin's final score of but in the closing stages of the game St Mary's showed themselves to be very clinical with further scores from Ray Mulvey, Alan Doherty (free) and Gary O'Daly although he will feel his shot should have found the net rather than flying over the bar.

Main Man: The pick of the bunch was Micheal McWeeney who was rock solid in defence, helped to start numerous counter-attacks and chipped in with an excellent point.

Talking Point: Can St Mary's go all the way? The Carrick men have impressed in winning their opening three games and are amongst the favourites to claim a first title since 2013 but tougher tests  lie in store and St Mary's will need to find another gear if this is to be their year.

Ref Watch: Ray McBrien dealt well with most of the challenges  thrown his way although perhaps one or two players were fortunate to escape red with five minutes remaining when a brawl broke out in front of the St Mary's goal when the ball was at the other end of the pitch.

Highlight: Although on the losing side Ciaran Cullen impressed throughout and his point eight minutes from the end was a real highlight.

Lowlight: The off the ball brawl that broke out with five minutes to play was out of keeping with what was an enjoyable contest. It is hard enough for a referee to keep control with such incidents only making the life of the referee considerably tougher.