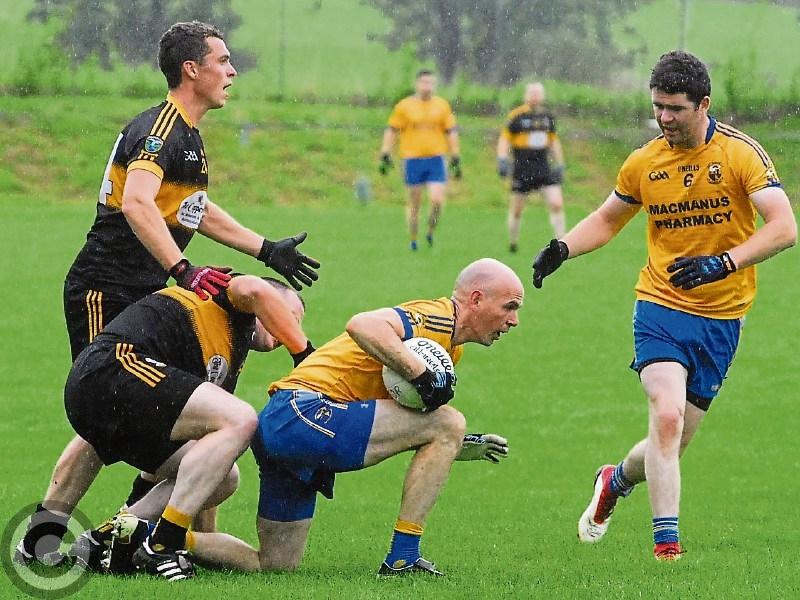 Glencar/Manorhamilton's Pat Gilmartin rises to his feet with the ball. Photo by Willie Donnellan

Despite a good Bornacoola opening period they were still trounced by a high flying and undefeated Glencar/Manorhamilton in Saturday’s one sided Group 2 tie in Ballinamore.

While Bornacoola struggled from midway in the first half, they only trailed by five points in the early stages of the second half but it was after this juncture in the game that Bornacoola seemed to more or less throw in the towel and allow Glencar/Manor to shift into a higher gear.

The north Leitrim side took complete command of the proceedings and ran out facile winners with little resistance.

It was Bornacoola’s third championship loss and they will need to win their last two games against Melvin Gaels and St. Mary's to avoid the relegation battle.

Manor’s win keeps them on top of the Group 2 table and ahead of St. Mary’s on score difference but thanks to the nature of their runaway win against the Bors, the forthcoming clash with St. Mary’s will be a better indicator of their true championship potential.

Darren Sweeney gave Manor an early lead when he shot a third minute point from play. Bornacoola got on level terms four minutes later when Damien Moran converted a free from 13 metres.

Bornacoola took the lead when Moran tapped over a 40 metre eighth minute free and added from play a minute later. But Glencar/Manor replied with two Conor Dolan frees to get on level terms and they went two up after 14 minutes thanks to points from Aaron Hickey and Thomas Coyle.

Damien Moran put over a free a minute later but Glencar/Manor surged and raced into a seven point lead by the 19th minute with Brian McDonald putting the ball in the net after getting an assist from Conor Dolan while Dolan, James Glancy and James Rooney added a point each.

Damien Moran and Aaron Hickey traded frees by the 23rd minute but Moran managed to reduce Glencar/Manor’s lead to five points after he shot a brace from play and a free.

Prior to the break Niall Brady added a point while in Bornacoola’s Brian Conroy and Gary McCluskey received a yellow card each after their were involved in two different play incidents.

Glencar/Manor enjoyed a 1-10 to 0-7 halftime lead. James Glancy raised the second half’s first flag when he hit over a point shortly after the restart. In reply Bornacoola hit two points on the trot in the next four minutes when Anthony Mulligan and Philip Howard both hit the target in turn.

At this stage Bornacoola had reduced Glencar/ Manor’s advantage to five points but Glencar/Manor moved up a gear and showed no mercy when over powering Bornacoola completely.

From the 35th to the 54th minutes Glencar/Manor hit an unanswered 1-9 with James Glancy hitting 1-1 while Ronan Flynn and Niall Brady chipped in with two points apiece with Conor Dolan, Brian McDonald (goal chance), Aaron Hickey and Killian McGriskin adding a point each.

In reply Bornacoola’s Damien Moran hit over a 55th minute free to raise his side’s final flag in the contest and register their first score in twenty-minutes. After that Glencar/Manor completed the scoring in the game with an Aaron Hickey point from play and a similar score from a James Glancy free kick.

Main Man: Glencar/Manor had a number of candidates in line for the  main man accolade including Brian McDonald, Killian McGriskin, Aaron Hickey and Conor Dolan, but James Glancy gets the nod due to his good performance and team leadership qualities.

Talking Point: The gulf in class between the top sides was very evident when this game concluded with a very one-sided score line.

Turning Point: When Brian McDonald finished an 18th minute move to the net the writing was on the wall for the Bors.

Ref Watch: Jimmy Stenson let this non contentious game flow and was an impartial man-in-the-middle who had only to deal with a minimum of disciplinary issues.

Highlight: Damien Moran’s impressive first half performance when he scored Bornacoola’s entire tally was perhaps the highlight of the game.

Lowlight: Because Glencar/Manor was so much on top there was a very low level of hot action championship fervour for the small attendance to enjoy during most of the action.