Aughawillan impress as they see off Drumreilly 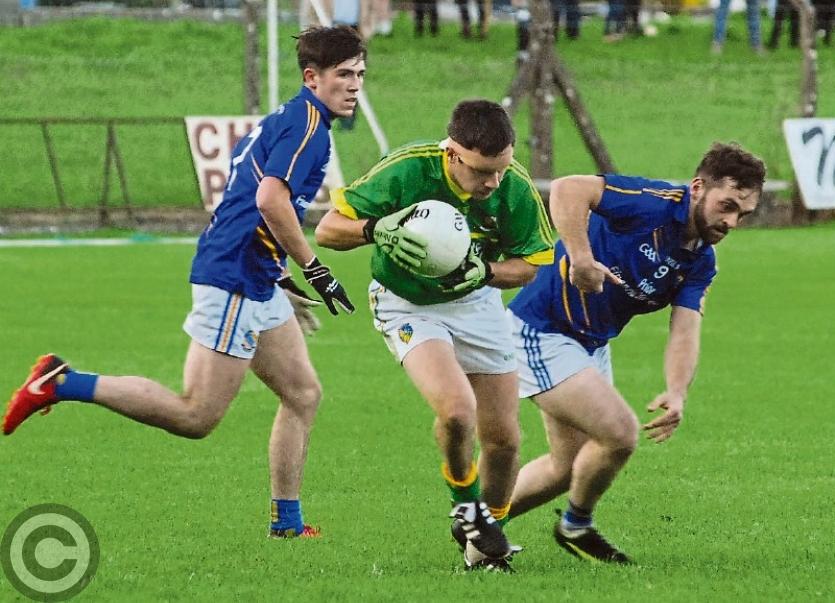 After their heroics in the opening two weeks of Connacht Gold Senior Championship action, Drumreilly played their part in another epic encounter last Friday night but ultimately they were undone by a clinical Aughawillan, under lights in Cloone.

Three Drumreilly goals helped keep them in contention but ultimately they were unable to live with the pace and movement of their opponents who were ruthlessly efficient in front of the posts.

A week earlier Drumreilly had been dominant in midfield against Ballinamore, but last Friday they were unable to come close to Aughawillan in that sector of the picth with Mark Plunkett, Sean Flanagan and a deep lying Morgan Quinn combining to nulify the threat of Declan Maxwell.

In a game that provided plenty of excitement, Drumreilly opened the scoring with barely 15 seconds on the clock when Peter Prior, another to impress in the opening weeks of the Championship, confidently dispatched a shot between the uprights.

Aughawillan hit back shortly afterwards when Morgan Quinn converted a third minute free and they took the lead for the first time when Rory McTague did very well to shoot over the bar while slightly off balance having taken a heavy shoulder.

Drumreilly were defending tenaciously and attacking whenever the opportunity arose and they replied with frees from Damon Maguire to leave just one between the sides with 11 minutes of the first half remaining.

Aughawillan quickly regained their composure and the upper hand as they struck for four points in seven minutes.

However, with a minute of the half remaining Ollie Maguire pounced for the game's opening goal and deep in injury time Damon Maguire converted a free after Francis Holohan was fouled to leave just a point between the sides at the break as Aughawillan held a slender 0-9 to 1-5 lead.

The half-time talk was of Drumreilly staging another memorable comeback but Aughawillan started the second half with a look of steely determination, clearly intent not to allow their opponents back into contention.

A Gary Plunkett free opened the second half scoring and that was quickly followed by ponits from Pearce Dolan, Fergal McTague and Mark Plunkett (45) helped open up a five point advantage.

Drumreilly registered their first score of the second half after nine minutes of play when a high ball was broken towards James Holohan who finished well.

A minute later Drumreilly tried to repeat the trick and it worked to perfection as they struck for their second goal. Ollie Maguire did brilliantly to deal with a high ball and he broke the ball to James Holohan who showed a predator's instict to be in the right place at the right time and he then finished emphatically, blasting his shot just under Colin Maguire's crossbar.

That goal could have done major damage to the confidence of the Aughawillan players but they responded brilliantly with a further four unanswered points. The pace, movement and work rate in the middle of the pitch created all manner of problems for Drumreilly and points from Pearce Dolan, Stephen Gilheany, Gary Plunkett (free) and Niall Beirne helped leave Aughawillan in control once more as they enjoyed a five point lead with nine minutes remaining.

As they tend to do when they are written off, Drumreilly came roaring back. Declan Maxwell's dangerous delivery evaded Ollie Maguire but the full-forward's presence caused enough panic in the Aughawillan defence to ensure it wasn't cleared properly and James Holohan was on hand to claim the loose ball and he dispatched his shot to the goal to reduce the deficit to two points.

To their credit there was never any sign of panic from the Aughawillan players and they managed the closing stages of the game very well.

A fine point from distance, scored by Sean Quinn helped settle any Aughawillan nerves and in injury time he scored again, from a closer position after being released by Morgan Quinn.

Main Man: James Holohan's two goals kept Drumreilly in contention but the standout performers wore   blue and gold . Morgan Quinn, Sean Flanagan, Rory McTague and Stephen Gilheany were all to the fore with Gary Plunkett the pick of the pack in a fine team performance.

Talking Point: Pearce Dolan is getting better as he gets more game time under his belt while the return of Ciaran Gilheany will only make Aughawillan stronger as the Championship continues.

Turning Point: Drumreilly's three goals arrived at times when it seemed as though any one of them could have proved to be a turning point but ultimately Aughawillan were too strong and responded in style to each setback.

Ref Watch: In a physical encounter with no quarter asked or given between two fiercely committed neighbours, Patrick Guckian was on top of matters and  implemented the advantage rule well.

Highlight: Drumreilly's opening goal came from a superb Conor Gaffney shot from near the sideline on the stand side in Cloone. As the ball dropped close to the Aughawillan goal, Ollie Maguire rose to get a decisive touch to force the bal goalwards.

Lowlight: It was a disappointing end to the game to see Gary Plunkett leave the field on a stretcher following a heavy collision. Nitpicking on the Aughawillan performance, they could and should have been more clinical when goal chances arose, something for them to work in the weeks ahead.