Allen win battle of the Gaels 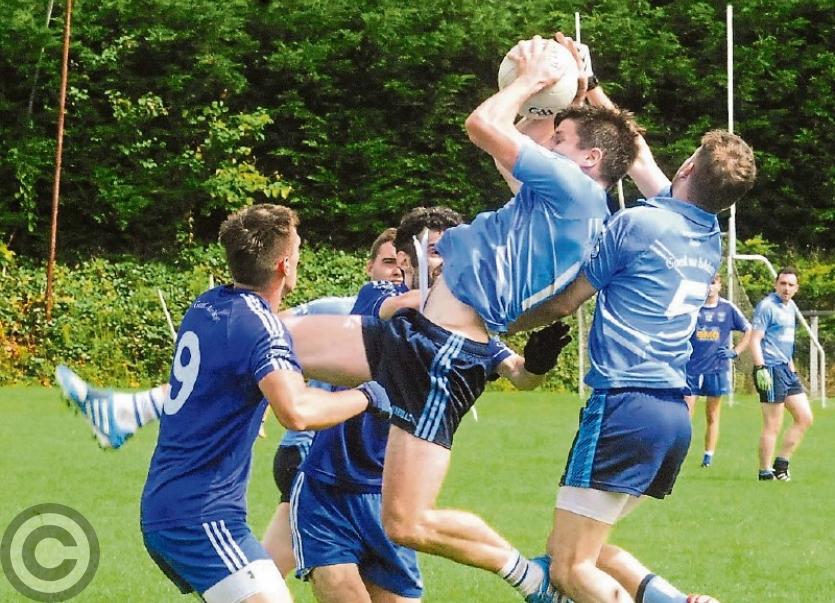 With a much more consistent overall performance, Allen Gaels secured their second championship win and a place in the quarter-finals when they overcame a somewhat struggling Melvin Gaels outfit in Ballinamore on Sunday afternoon.

As a result of the defeat, Melvin Gaels now find themselves second from the bottom of Group Two, just above Bornacoola on score difference.

Allen Gaels made victory secure in the second half when building up a five point advantage after Melvin Gaels had not scored for the first 22 minutes.

The Kinlough Gaels managed to reduce Allen Gaels' lead to a point as the end of normal time beckoned. But it proved to be too little too late as Allen Gaels hit back to make the win secure with two unanswered points in added time.

Melvin Gaels were first out of the blocks and took the lead when Philip McGowan fisted over a second minute point. Martin Beirne levelled matters soon after when he put over an eight minute free.

Allen Gaels James Flynn was sent for an early shower some five minutes later when he committed a black card offence. Darragh Rooney put Melvin Gaels back in front and Rooney repeated the exercise a minute later to edge his side further ahead after again winning a second ball.

The Drumshanbo men responded quickly when Caleb Duffy and Thomas Mulvey hit back with a point apiece to level the contest for a second time by the 17th minute.

Almost immediately David Wynne put Allen Gaels back in front but it returned to an even Stephen situation once more when Darragh Rooney shot a Melvin Gaels point two minutes later after a pass from Emlyn Mulligan.

But Martin Beirne made it a nip and tuck contest once more four minutes later when he put over a close-in free. Allen Gaels finished the half stronger and with points Martin Beirne (free) and Ciarán Walsh went leading at the break by 0-8 to 0-6.

Shortly after the restart Martin Beirne increased Allen Gaels lead with a 32nd minute free tap over. Ciarán Walsh made it a four point advantage for Allen Gaels after Melvin Gaels keeper Jessie McGuinness deflected his goal bound effort over his bar.

After the game had gone scoreless for a ten minute period, Caleb Duffy increased Allen Gaels lead when fisted over a 44th minute point. Melvin Gaels registered their first score in 26 minutes when Emlyn Mulligan hit over a 52nd minute free.

After that Mulligan tapped over three more frees to reduce Allen Gaels lead to the minimum as the game went into injury time. But then Allen Gaels staged a late surge to ensure their win when hitting two points, one from play by Ciarán Walsh and another from a 55 metre Diarmuid McKiernan free conversion.

Main Man: A number of players made big contributions to Allen Gaels win on Sunday but it was perhaps dedicated full-forward Ciarán Walsh who delivered most for the Drumshanbo side.

Talking Point: Melvin Gaels challenge more or less collapsed in the second half until near the end which was surprising after the north Leitrim had matched Allen Gaels stride for stride for most of the opening thirty minutes.

Turning Point: Martin Beirne's 30th minute Allen Gaels free he put his side into a lead they never subsequently surrendered. It was a neck and neck situation for control prior to that between Allen Gaels and Melvin Gaels.

Ref Watch: Kevin Mallon handled the game decisively. He dealt promptly with a number of niggling situations as they occurred and which eventually led to the dismissal of a player from each side near the end.

Highlight: Diarmuid McKiernan’s 55 metre free conversion for Allen Gaels prior to the end of the game probably was the most impressive individual piece of play over the course of the contest.

Lowlight: While there were some good passages of play during the game there were times also during it when the exchanges became very scrappy and not great to watch for the relatively few spectators that were present.