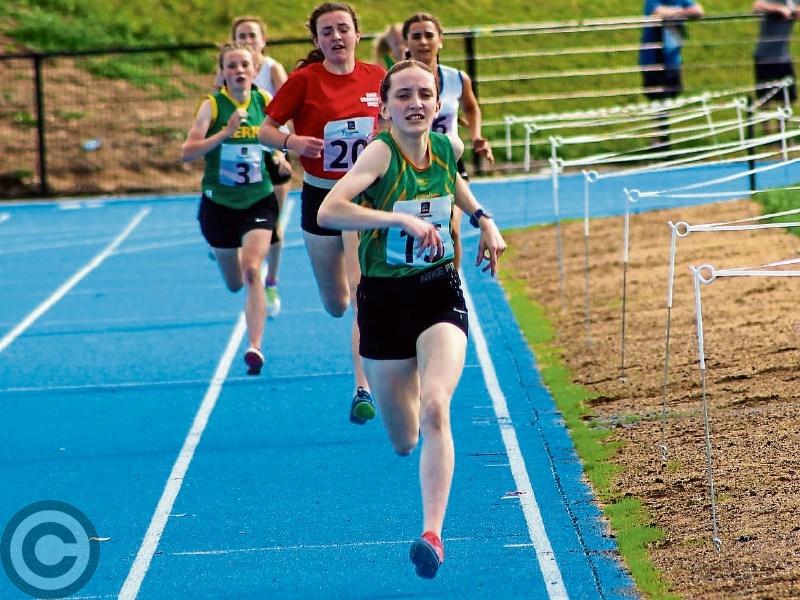 Kinlough Area's Niamh Carolan strides clear of the field to win the U16 Girls 1,500m at the Aldi National Community Games Athletics Finals in the University of Limerick last weekend

Kinlough Area’s Niamh Carolan turned her attention from the walk to the running events with great success as she dominated the U16 Girls 1,500m to win gold.

Leitrim’s success wasn’t confined to individual events as Manorhamilton Area claimed a first ever win for the county in the U15 Futsal event, winning the title with the last kick of the game, while Drumshanbo Area claimed silver in the U16 Spikeball.

On a weekend when there were a number of excellent performances in all disciplines with a lot of athletes making it into heats and unlucky not to reach finals.

Niamh Carolan’s victory was impressive due to it’s dominance as the North Leitrim AC member won by over 60 metres to claim yet another national title.

The decider proved to be a much closer affair with nothing to separate the sides after normal time with the game finishing 3-3. However, there was to be no denying Manorhamilton and they scored the only goal of extra-time to secure gold.

The goalscorers for Manorhamilton were Diarmuid Giblin and hat-trick hero Eanna Clancy.

Drumshanbo beat Lurgan Cavan in a thrilling contest that went to extra time and then came up against a very strong Templemore in the Final, the Tipperary team winning in three sets. See page 64 for detailed report on the Spikeball events.