ALMOST DOWN TO THE WIRE - Leitrim Club Championships previews 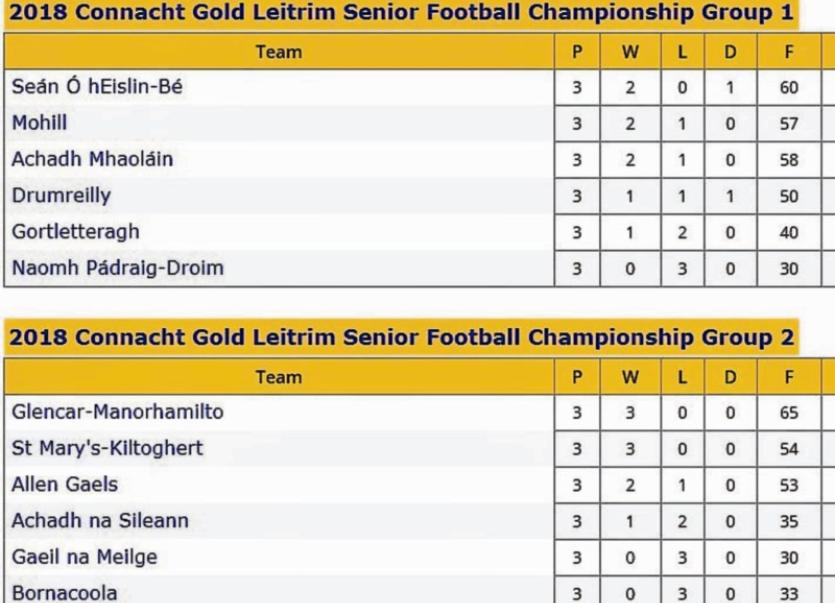 Some are already there, some will join them this weekend but round four of the Leitrim Senior Championship sees the hopes of many teams go right down to the wire.

Group 1 in the Connacht Gold Senior Championship is still pretty live with all six teams having something to play for. Ballinamore have one foot in the Quarter-Finals but could book their place officially with a win over neighbours Aughawillan, who could do the same.

The relegation battle is just as tight - Dromahair have to win this weekend to avoid the relegation semi-finals and a win against Gortletteragh would be huge.

In Group 2, Glencar/Manorhamilton and St. Mary’s Kiltoghert are already in the quarter-finals and their match is all about final placings. Melvin Gaels and Bornacoola meet in a huge game where the winner may just keep their season alive while a win for Allen Gaels against Aughnasheelin would see them book their quarter-final spot. A win for Aughnasheelin, provided Melvin Gaels win, would leave a winner takes all final round encounter.

Mohill v Drumreilly in Ballinamore 5.00: Mohill surprisingly lost to Gortletteragh in the last round - is it a sign their aura is diminishing or was it just a slip? Drumreilly gave Mohill an awful shock last year in the Quarter-Finals and won’t fear the champions but you’d expect that Mohill, getting back to full strength, should emerge with the win.

Aughawillan v Ballinamore Sean O’Heslin’s in Cloone 5.00: This really is too tight to call. Neither have made many false steps so far in this championship and Aughawillan appear to building a nice head of steam. Ballinamore are getting closer to full strength as well so don’t rule out a draw here - it would be enough to see both through.

St. Patrick’s Dromahair v Gortletteragh in Pairc Sean Mac Diarmada 6.30: Gortletteragh’s unexpected win over Mohill has revitalised their campaign and a win here would give them huge hope going into their last game with Drumreilly. That desire should be enough to propel them to the win.

Melvin Gaels v Bornacoola in Pairc Sean Mac Diarmada 5.00: Lose here and you’re in the relegation semi-finals, win and you might just survive. Melvin Gaels would appear to have the greater chance and better form so expect the Kinlough men to pick up their first win.

Glencar/Manorhamilton v St. Mary’s Kiltoghert in Drumshanbo 6.30: Pride, top of the table, bragging rights - that’s all what is at stake along with what is supposedly the easier draw in the Quarter-Finals. Both these teams have impressed so far and this is too close to call. If pushed, Manor for the win but without great conviction.

Aughnasheelin v Allen Gaels in Ballinamore 6.30: A Aughnasheelin win for would be a huge lift ahead of their last round clash with Melvin Gaels but Allen Gaels have been steadily impressive under Sean Pierson. This will be close but the Gaels might just have a little more scoring power here.

Group 1 could be finished this weekend if Eslin and Ballinamore win with quarter-finals and relegation all sorted a round early! It may just give Carrigallen the push they need to keep their hopes alive but they face a huge task. Kiltubrid and Eslin are already in the Quarter-Finals but Annaduff need to bounce back after their loss to Eslin.

Group 2 is a dogfight with Fenagh St. Caillin’s sailing serenely into the quarter-finals. They face a tough challenge against Leitrim Gaels next Saturday, a game that will tell us a lot about both teams.

Ballinaglera have to win to keep their hopes alive against Drumkeerin in a derby clash while a Cloone win in their derby with Aughavas could be enough for them.

Annaduff v Kiltubrid in Cloone 8.30: Friday night’s clash in an intriguing one as Kiltubrid face the two teams below them in their last two games. Annaduff need the win here but Kiltubrid are going well and will be hard stopped. Their greater confidence may just be the deciding factor.

Mohill v Ballinamore Sean O’Heslin’s in Cloone 12.00: Sunday’s meeting of two second string teams is interesting as a win for Ballinamore would set them up to finish ahead of Carrigallen. On form so far, that looks likely here.

Carrigallen v Eslin in Pairc Sean Mac Diarmada 12.00: Carrigallen need results to go their way, starting first with a win here. But they come up against an Eslin team making impressive progress so far and it is hard to see them stopping Conor Beirne from getting the scores he needs.

Ballinaglera v Drumkeerin in Drumshanbo 5.00: Another big game here - a Ballinaglera loss sees them in the relegation semi-finals and for a team that was considered one of the contenders, they have struggled. Their draw with Leitrim Gaels shows what they can do but they have let leads slip against the Gaels and Cloone. Drumkeerin can seal their semi-final place here and they probably just have the edge in form to take the win.

Leitrim Gaels v Fenagh St. Caillin’s in Cloone 6.30: Top of the table clash and a real test for Fenagh St. Caillin’s who have set the standard so far. There might not be much to play for in terms of the group but with the knockout stages in mind, both teams will want to send out a message here. Fenagh get the nod because of their form so far but the Gaels are their first serious test and don’t be surprised by a surprise.

Aughavas v Cloone in Ballinamore 12.00: Sunday’s game sees Cloone looking for a second win that probably would be good enough to send them into the Quarter-Finals and you’d expect that no matter what local resistance Aughavas offer, Cloone will have too much for them here.

For all those interested, the final round of games is scheduled as follows: