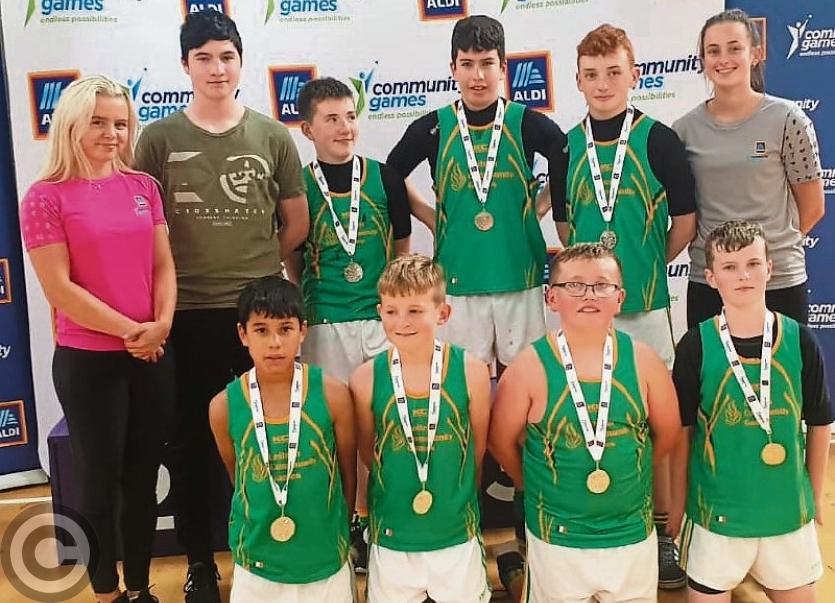 Drumshanbo did their county proud at the UL Arena at the Aldi National Community Games Final when they brought home silver medals in the U15 Spikeball event.

Drumshanbo won a very exciting semi-final against Ulster champions Lurgan. They recovered very well against Spikeball specialists Munster Champions Templemore in the final and were just pipped in the third set.

Drumshanbo got the perfect 4-0 start. Lurgan levelled at 4-4 but with Daniel O’Loughlin setting high they were four ahead again by 16-12 and won the set well. The second set was much closer. Lurgan lead a few times up to seven.

Drumshanbo then took over thanks to aces and spikes from Dean Cornyn and a Cian Dennis winner to put them 17-16 ahead. But the referee pulled Drumshanbo for foul touches and with the clock almost zero Lurgan levelled 18-18. Lurgan celebrated as they hit down the final point but the referee deemed it a push and Drumshanbo were two sets up.

Cavan were now playing very well and the third set was level nine times. They lead 3-2, Drumshanbo lead 6-3, Lurgan led 13-11, Drumshanbo led 16-14 and it ended 18-18. Cavan raced 4-1 in extra time but it was level by five and Drumshanbo swapped sides 7-5 ahead. They pushed on ahead helped by two winners from Adam Casey to seal it.

The Tipperary area, officially known as Templemore/Clonmore/Killea, raced ahead 10-0 with brilliant reactions and pre-planned aggressive spiking and easily won the first set.

Although ahead 2-1, Drumshanbo fell 6-12 behind in the second set and could never close that lead. Padraig Keane, featuring strong in all sets, hit a winner at 13-17 but that was as close as they got.

But, just as they had in Connacht, Drumshanbo reorganised themselves to counter their opponents. Slightly behind at the start, Drumshanbo’s star player Karl Winters blocked twice and spiked down and suddenly all the aggression was knocked out of Templemore.

Drumshanbo led 9-6, 12-8 and 16-13 where top server Karl Foley went on his fourth perfect run of the day. Over-enthusiasm led to some errors and, as the clock ticked and the score 18-18 a Tipp ball headed for the line. It just caught it and Tipp had won.

An hour later, Templemore easily won their first set against Lurgan and this ensured silver for Drumshanbo thus ending a great summer for the boys where all had played so well.