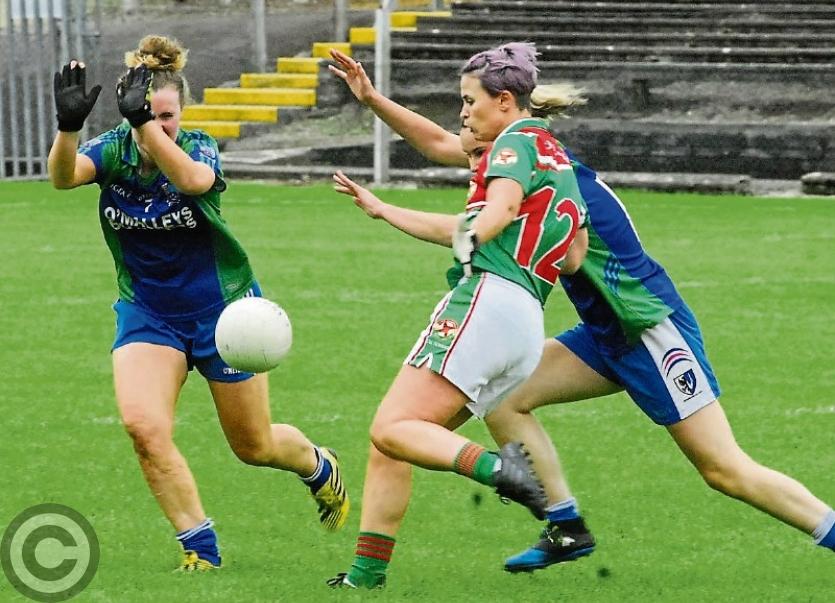 It may not have been as enthralling as the first semi-final but St. Joseph’s late victory over Kiltubrid was certainly no less dramatic with the winning goal coming over five minutes into added time last Sunday.

Pairc Sean Mac Diarmada witnessed two intense, hard fought and entertaining semi-finals last Sunday and the shame was that there was so paltry a support to witness a dramatic game decided eventually by a breakaway Michelle Heslin goal.

The drama couldn’t have been higher - a throw-ball on the 21 yard line saw Kiltubrid’s Michelle Guckian contest the throw but somehow St. Joseph's won the ball back, the ball worked out to Michelle Heslin underneath the stand.

When the St. Joseph’s player broke past her opponent at the halfway line, it left her and sub Ciara Maguire facing the keeper and a defender. Heslin bore down on goal, sending a pass to Maguire. The return across the face of goal was low and almost evaded Heslin’s grasp but she managed to get a hand to the ball to leave it trickle across the line.

It was tough on Kiltubrid who started the second half nine points in arrears but mounted a ferocious fightback and they must be wondering about the numerous goal chances they spurned over the course of the game.

St. Joseph’s started with two points inside the first 60 seconds from Carmel McGovern and Bronagh O’Rourke but a Emma Guckian goal on two minutes, set up by Michelle Guckian, rocked them on their heels.

O’Rourke and Guckian swapped points before St. Joseph’s hit two goals inside 60 seconds - McGovern collecting a great pass from Clare Owens for a classic forward’s goal before Aine Heslin soloed in from her own half, breaking tackles, to bury the ball in the net.

Heslin got a third point before Siobhan Kelly drove the ball over the bar with a goal on the cards. After Michelle Heslin missed a certain goal, Siobhan Kelly went close to a goal again when pointing.

Crucially, two minutes into added time, Michelle Heslin played a one-two with Deirdre Moran and buried the ball in the net to give St. Joseph’s a 3-8 to 1-5 lead.

It looked all over bar the shouting but Kiltubrid were in no mood to surrender and points from two Michelle Guckian frees gave them hope. Carmel McGovern replied with a free as St. Joseph’s hit some terrible wides, Kiltubrid were also guilty, but the two time Connacht Senior finalists started to close the gap.

Aine Redican drove over the bar with a goal on while Kelly got her third of the game. Sinead Tighe then soloed from her own 50 to the 21 yard line to point and suddenly the gap was five points.

Carmel McGovern and Michelle Guckian swapped points as Kiera Masterson and her defence twice made saved to deny Siobhan Kelly but with six minutes left, Kiltubrid finally got the goal they needed when Emma Guckian’s run led to a tidy finish from Teresa Mylott.

But with the game in the last seconds of normal time, Michelle Guckian converted a 50 yard free and Kiltubrid looked the more likely to score in added time, dominating possession and territory.

Unfortunately for them, they never got the score they needed and as they went the length of the field, Michelle Heslin goaled to send St. Joseph’s back to the final.

St. Joseph's will now defend their title against League winners Glencar/ Manorhamilton in the Final on Saturday, September 1, venue yet to be fixed, in what should be an intriguing and exciting showpiece of the Ladies game.

Main Woman: With lots of standout displays on both teams, hard to pick out one or two but Siobhan Kelly, Aine Redican and Isabella McKeown impressed for Kiltubrid while Deirdre Moran, Vanessa Gallogly, Alanna Bohan and Carmel McGovern were the rocks St. Joseph's built their victory on.

Talking Point: This game really could have gone either way - St. Joseph's kicked some awful wides in the second half and looked to be losing their way while Kiltubrid will regret at least five missed goal chances over the hour that could have turned the game their way.

Turning Point: In a game with so many twists and turns, it was the final twist that decided this game - St. Joseph's winning a throw-ball on their own 21 yard line and breaking the length of the field for Michelle Heslin to palm home the winning goal.

Ref Watch: A relatively easy job for Pat O'Toole but he did it well. He also communicated clearly to both teams how much time was left as the match drew to it's dramatic conclusion.

Highlight: Carmel McGovern's goal, getting on the end of long flowing passes from her team-mates, was the sort of score that lights up the highlight reel.

Lowlight: Honestly, with no other games on, you'd have expected a much better crowd there to support both teams and even neutrals, a disappointing turnout.