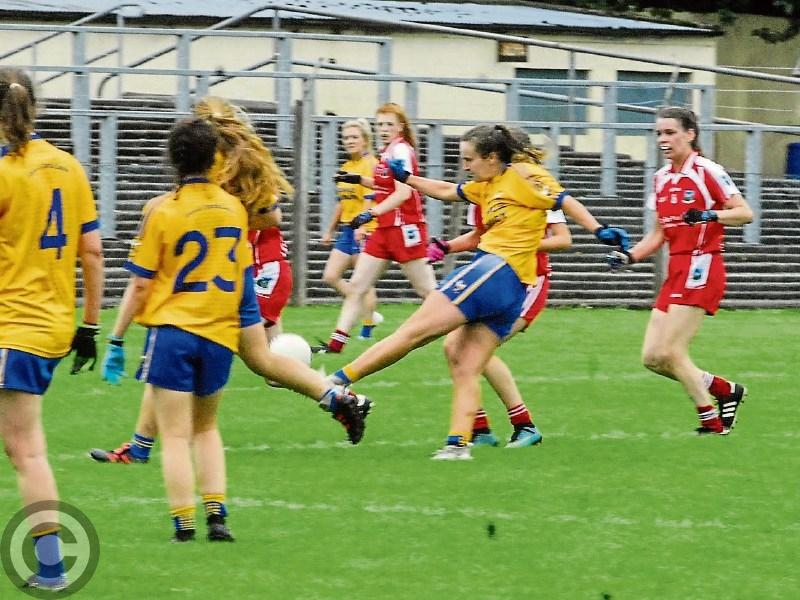 Ailbhe Clancy strikes for the goal that earned Glencar/Manor a draw. Photo by Willie Donnellan

A dramatic injury time howitzer of a goal from the outstanding Ailbhe Clancy rescued Glencar/Manorhamilton last Sunday and eventually drove them on to victory.

Dromahair, with some justification, must be wondering how they lost this game as they dominated the second half and most of extra-time but when it came to the key moments, Glencar/Manor and Ailbhe Clancy stood tall.

Dromahair held a three point lead after a brilliant late goal from Anna Conlan and looked set to surprise the League champions with a display full of courage and heart.

Clancy's goal must have broke their hearts and in the opening minutes of extra-time, the Glenfarne woman quickly set up a goal and then took one herself to more or less end the game as a contest.

That it didn't was down to the stubbornness and defiance of Dromahair who fought back with two goals of their own and they must be wondering what more they could have done to win this epic contest.

The match started off as it was to continue with Muireann Devaney putting over a free but Dromahair hit back with a goal, Grainne Moyles low and poorly hit shot somehow eluding the grasp of Glencar/Manor keeper Ailbhe Sheridan to squirm into the net.

Sinead Kelly pointed on three minutes but Glencar/ Manor hit back with points from Leah Fox and Ailbhe Clancy, Fox’s effort should have been goal after Devaney and Clancy set her up.

Conlan & Clancy swapped scores before Manor found their range with Orlaith Kelly and Clancy (2) on target, Clancy hitting a brilliant second point. Conlan replied with a free but Dromahair keeper Aoife McTernan was needed to make a great save from Clancy.

Two players collided out the field and from the harsh free, Clancy converted but Edel Kelly ran half the field to score a great point on 23 minutes. And the sides went into the break level at 1-5 to Manor and 0-8 for Dromahair after a brilliant Conlan point in added time.

Dromahair took command early on with Ava Fowley driving the ball over the bar before Laura Fowley bundled the ball to the net after great work from Mary Farrell and Anna Conlan, the goal being awarded after a long debate about a square ball infringement.

Glencar/Manor’s response was impressive with Devaney (free) and Clancy on target.

Anna Conlan maintained a three point lead but it was wiped out on 18 minutes when Devaney put Leah Fox clean through and an easy finish to the net tied the scores. Devaney then edged Manor in front with Conlan replying.

Again Devaney scored a good point to put Manor back in front but with seconds left in normal time, a great move involving three or four players ended with Anna Conlan applying the killer finish from close range.

Dromahair went three up when Conlan converted a free immediately after but with over two minutes of added time, Clancy rescued Glencar/ Manor when a patient move saw her gain possession 30 yards out and her thunderbolt flew high into the left corner for a dramatic equaliser.

Dromahair opened the first period of extra-time with a point from Mary Farrell but Manor effectively won the game in the first three minutes when Clancy set up Devaney for a goal and then Clancy blasted to the net herself.

Anna Conlan swapped points with Niamh Feely and saw a shot saved on the line but Manor looked home and hosed when Devaney broke clear for an easy goal, a Conlan free seeing Manor lead 5-13 to 3-12 at the break.

Dromahair refused to give in and a minute into the second period, they won a penalty when Ailbhe Sheridan rushed off her line and ran into Mary Clancy. Sheridan almost made amends with an excellent penalty save but Anna Conlan gathered the rebound from her kick to goal.

Ailbhe Clancy capped a superb display with a fine point but as tiredness took its toll on both teams, chances dried up. Dromahair were still dominating but Manor’s strong defence held them out until great work from Edel Kelly released Conlan to score a third goal.

That came with less than three minutes to go but Dromahair couldn’t engineer another scoring chance as Glencar/ Manorhamilton held on for victory and a place in the Final.

Main Woman: Lots of contenders here on both sides - Ailbhe Clancy was superb and really led her team in style while Karen Connolly and Annette Ferguson stood out in defence. For Dromahair, Anna Conlan, Mary Farrell, Erin McGoldrick, Sinead Kelly and Mairead McMorrow stood tall. But there were one players from each team who really impressed with solid, hard working displays with Orlaith Kelly superb for the winners and Edel Kelly not too far behind for Dromahair.

Talking Point: Dromahair will wonder how they left this game behind them as they dominated the second half but you can't fault Glencar/ Manor's resilience.

Turning Point: It might have come after 62 minutes of action but Ailbhe Clancy's thunderbolt goal was the key score in this game, denying Dromahair what would have been a deserved win and giving Manor a lifeline they gratefully grabbed in extra-time.

Ref Watch: Ray McBrien didn't please either team, which may mean he did ok. A few decisions were controversial and he might have punished persistent fouling from both teams a bit more severely.

Highlight: Ailbhe Clancy's goal that levelled the scores at the end of normal time was a rocket of a shot.

Lowlight: Not too many really in a top quality game between two fierce rivals.