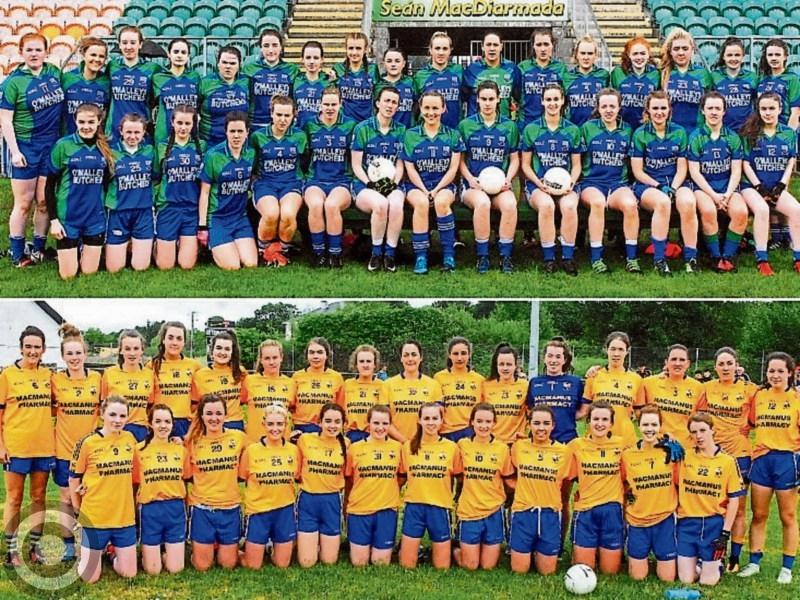 Who will lift the title on Saturday?

Next Saturday could see the start of a new era in Leitrim Ladies football or it could be the empire striking back as Pairc Sean Mac Diarmada hosts an intriguing Senior Championship Final (6.30 pm throw-in).

Rising power Glencar/Manorhamilton contest their first ever Senior Championship Final after a rapid rise through the ranks, sweeping all before them and looking like the club most likely to repeat Aughawillan’s extraordinary dominance in the coming years.

But that forgets one important fact - standing between them and the title is a formidable St. Joseph’s team who are, in fact, the reigning champions and a team full of quality footballers used to the big occasion and used to winning.

Add to the fact that the Aughavas & Carrigallen women defeated Glencar/ Manorhamilton by a solitary point in last year’s semi-final and it gives you a fair indication that next Saturday’s decider is going to right down to the wire.

To be honest, you’d have to expect nothing less after the two semi-finals the finalists served up a little over ten days ago when Glencar/Manor rescued their championship hopes with an added time Ailbhe Clancy goal against Dromahair.

Manor would go on to hold off their neighbours in extra-time while St. Joseph’s, after blasting out to a huge lead, needed an injury time goal from Michelle Heslin to see off a resilient Kiltubrid who had overturned a nine point lead.

Both those games showcased the strong and weak points of Saturday’s finalists as both are capable of running up big scores in relatively short spaces of time but both were vulnerable for long periods as inaccuracy cursed them at various times.

Much of the talk around Glencar/Manorhamilton is of the extraordinary attacking talent they possess in Ailbhe Clancy and Muireann Devaney, both powerful players with an accuracy, power and range that few in the county possess.

But St. Joseph’s may just have their match - Carmel McGovern and Bronagh O’Rourke are excellent finishers with pace while Michelle Heslin’s incredible pace and ball carrying ability has few equals, unless of course you count her sister Aine!

But it is not just a battle of forwards - Glencar/Manor have a much more organised and disciplined defensive unit, making it hard for any team to find room against them while St. Joseph’s boast an experienced back six who can go up against anyone.

Manor's defence could include former Sligo player Cammie Kennedy but even when missing some first choice players, the north Leitrim side have more than adequate replacements to step in and do a good job and captain Karen Connolly leads an impressive back six.

Glencar/Manor would be quite happy to drop a lot of players back, content to break quickly and allow Clancy, Devaney and Leah Fox have lots of room to exploit. Keeping track of that will be key for St. Joseph’s chances.

But in Vanessa Gallogly, Alanna Bohan and Shannen O'Rourke, St. Joseph's have quality defenders with assistance coming from midfielders Aine Heslin, Clare Owens and Deirdre Moran - all experienced players comfortable on the ball and full of experience.

Breaking down Manor’s defence is no easy task and when you have players like Melissa Hewitt, Dearbhla Rooney, Aoife Gilmartin and Orlaith Kelly tracking back and turning the ball over, it makes scoring a much tougher proposition.

You don’t get the feeling that fitness will be an issue for either team - Michelle Heslin ran half the length of the field to score the winning goal in the semi-final while Glencar/ Manor were full of running at the end of their epic encounter with Dromahair.

Can you draw a line in form between the two teams? Hard to know - Glencar/Manor beat Dromahair after a titanic battle in the League Final and were fortunate to grab the draw against their neighbours in the semi-final.

St. Joseph’s meanwhile had four points to spare over Dromahair in their 2-15 to 4-5 victory in the Group stages so does that suggest form is with the Aughavas & Carrigallen camp? Hard to know what to make of it, harder still to put any money on it.

There is a nagging feeling that St. Joseph's are perfectly primed to knock favourites Glencar/Manorhamilton off their perch - the north Leitrim side have to start as favourites with their League victory and scoring power but it is a precarious sort of favouritism.

What I will say is that there is no better side than St. Joseph's to defy the odds. Their experience and quality definitely means they are more than capable of retaining the title next Saturday.

But you get the feeling of destiny with this Glencar/ Manor outfit, that this is their year. That comes with a major caveat in that they haven't been near their best in the championship this year but their scoring power is immense, their defence smothering and their self-belief strong.

Yet when it comes down to it next Saturday, I really don't know what way to go. You wouldn't be surprised with a draw but if pushed, Glencar/Manor to edge it.