The view from St. Joseph's 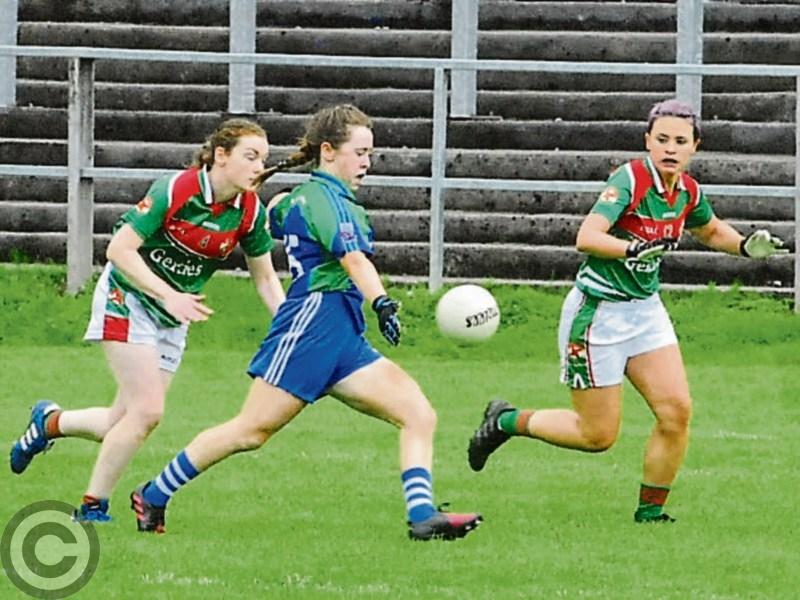 Bronagh O'Rourke scores for St. Joseph's in their semi-final victory over Kiltubrid. Photo by Willie Donnellan

You can’t buy experience and St. Joseph’s are hoping that their hard won experience over the last ten years will stand to them in good stead in next Saturday’s Leitrim Ladies Senior Championship Final.

St. Joseph’s face the coming force that is Glencar/Manorhamilton but the reigning champions believe that their experience could make all the difference in what manager Joe Murphy believes will be a very close Final in Pairc Sean Mac Diarmada.

Speaking to the Observer ahead of Saturday’s decider, Joe says “Looking forward to it, very much so, it is going to be an interesting one. I think it will be a big, big test.

“We’ve only met each other once in the League this year so there will be a little bit of an unknown quantity coming into it.”

Joe is very well aware of the threat posed by Glencar/Manorhamilton but believes his team’s experience can carry the day - “Six finals in the last eight years so they are a very experienced group, we have a lot of experienced players in there at the minute and we would be hoping that on the day, we can draw on that experience.

“But if you look at the Manorhamilton team, they are very strong, they have been coming good for a while and they have an experienced management team there as well. So looking at it, it looks as if it will be fairly even and hopefully, it will be a good game.

“They’ve been there before, they’ve been in big games and they are big game players and we badly needed that experience to help our other players. When the pressure is on, it is great to have those players there who came come up with big plays or can stem the tide when it is coming against us.

“We’d be hoping that they’d be able to show their experience again on Saturday and give us a big game. I think it will be a big, big test. ”

The experience and know-how was on show in the semi-final when the reigning champions led by nine points but saw their lead evaporate in the face of a ferocious Kiltubrid fightback before Michelle Heslin struck for a dramatic injury-time winning goal.

And Joe believes that no lead is safe in Ladies football - “This happens a lot in Ladies football I suppose, it is never over till it’s over, you can never have a big enough lead. I suppose we rued a lot of missed chances, we had a lot of wides and we probably could have made things a lot more comfortable for ourselves.

“But fair play to the girls for digging in, they showed their character late on when the pressure was on, when Kiltubrid looked as if they were going to take us. But it is great to know that when things are tight, that we have those players there that can stand up and maybe get us out of a hole.”

St. Joseph’s have a strong spine and in attackers Michelle Heslin, Carmel McGovern and Bronagh O’Rourke, they possess real firepower but Joe stresses the strength of the overall team - “Maybe we have been reliant on certain players but it is a team effort at the end of the day.

“It starts right from the goalkeeper all the way back, our defence got us out of a bit of a hole there, getting quality ball up to these players so it is working as a team and being able to facilitate our scoring threats. But they have to work from one to 15 and all the players who come on.

“It is going to be the same again, it is going to take all our players, all of our squad, all of panel and we’re just hoping that we come out on the right side of it.”

Neither will St. Joseph’s fall into the trap of believing Glencar/Manor are a two player team and concentrate solely on Ailbhe Clancy and Muireann Devaney - “I’ve heard a lot of people talking about these big players that Glencar/Manorhamilton have but it is the foundation that they have around them players, they are a very strong unit.

“We’re not just looking at one or two players, we’re looking at every single one of their players. They have a very good management team, they are very well organised, they are very fit so every player that comes on that field will be a threat against us.

“So we will have to be on our A game and make sure that we keep our eyes on every player and not just one or two, we’re looking after every player.”

Looking for a prediction, Joe says “We don’t have a crystal or anything like that but we’ve prepared well, we’ve had a couple of tough games there and I think that will stand to us come the final.

“I’m hoping the experience that we have, even going back over the last few years, will give us a bit of an edge come the final but we’re under no illusions. Manorhamilton are very strong, they are League champions for this year, they are very well organised, they are a high scoring team as well and they’ve showcased that in this year’s championship.

“It is going to be very, very tough, I don’t think there will be a lot in it but we’re quietly confident going into it that if we can play to our full ability, we’ll give a good performance and we’ll see what happens after that.

“It is fixed for Pairc Sean, a nice big pitch and hopefully, the weather stays good and allows for a good game of football. We expect it go down to the wire and hopefully, we will be able to come out the right side of it.”