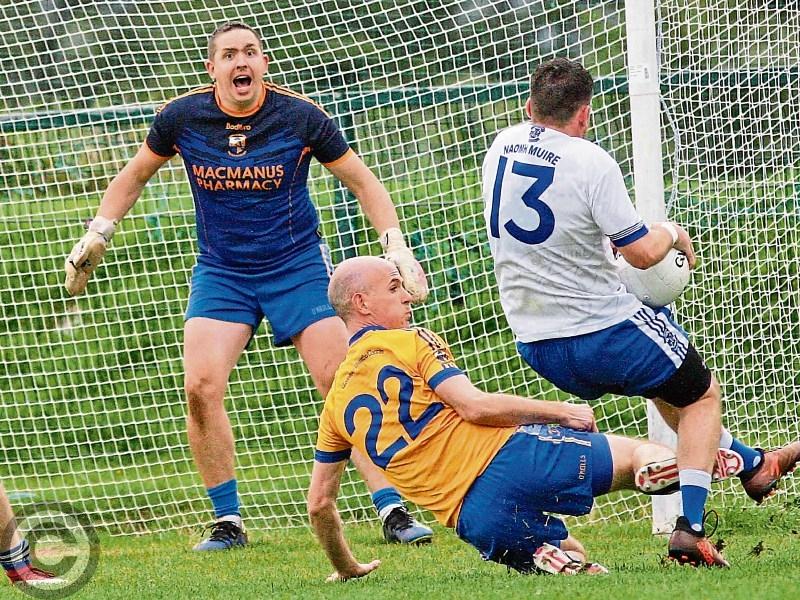 Glencar/Manor's Pat Gilmartin challenges St. Mary's Alan Doherty in one of Saturday's major talking points as St. Mary's were denied a penalty for this incident. Photo by James Molloy

It was not quite a phoney war but Glencar/Manorhamilton took the bragging rights in Group 2 when their clinical finishing saw off a determined St. Mary's challenge in Drumshanbo.

With both teams already into the quarter-finals, this game could have been a damp squib but both attacked it vigorously and in the end, the ice-cold finishing of the north Leitrim men was something St. Mary's couldn't match.

It wasn't that the Carrick side didn't have the chances but some bad wides and two top quality saves from Gary Hickey ensured St. Mary's didn't get full reward for their efforts and when the game was there to be won, Glencar/ Manor know best how to do it.

Two controversial refereeing decisions didn't help Mary's but they had enough chances to cause Manor real problems but as the game went on, they seemed to wilt in the face of Glencar/Manor's intense defensive pressure.

A greater spread of scorers and their ability to find the better placed man in space also spoke volumes for last year's county finalists.

It may have no big effect now but it is hard not to see both teams going very well in the knockout stages.

After two St. Mary’s wides, Glencar/Manor opened the scoring with a brilliant Seamus Ryder score but Daire Farrell showed real pace to twice get in behind the Manor defence to fire over two nice points.

Manor took control with five unanswered points in a seven minute spell. Thomas Coyle fired over from distance while Killian McGriskin got on the end of a good move for an eighth minute point.

Evan Sweeney, on as an early sub for an injured James Rooney, converted a free before Niall Brady was found in space for a good point. Aaron Hickey then somehow managed to thump a 50 over the bar despite slipping as he struck the ball on 14 minutes.

St. Mary’s, however, hit back with a Mark Diffley free on 16 minutes. Conor Farrell won a kickout two minutes later and soloed through to point before Alan Doherty converted a free on 19 minutes.

The Carrick men almost broke through for a goal on 20 minutes but David Tiernan’s low shot was brilliantly saved by Gary Hickey at the expense of a fifty that was put wide.

As the game entered injury time, there was controversy when St. Mary’s breached the Manor defence only for Alan Doherty to be clearly upended by a falling Pat Gilmartin. Referee Eamonn O’Grady blew his whistle but went in to consult with his umpires before mystifyingly awarding a free out.

Glencar/Manor worked the ball up the field where Adrian Croal won a soft free, expertly converted by Conor Dolan, to leave the scores tied at 0-8 apiece at the break.

The second half saw Niall Brady and Ray Mulvey swap early points but Glencar/ Manor were intent on pushing clear and a nicely taken James Glancy point was quickly followed by points from Seamus Ryder and Evan Sweeney, Ryder unlucky not to goal after good work from Aaron Hickey.

Hickey himself scored a lovely point to move Manor four points clear midway through the half as they looked in control but a Doherty free narrowed the gap. Unfortunately for St. Mary’s, they hit some bad wides.

The final crucial turning point came five minutes from time when Niall Brady was found in behind the St. Mary’s defence and he calmly finished the ball to the net, referee Eamonn O’Grady waving away St. Mary’s appeals for a clear barge by Killian McGriskin in the build-up to the goal.

The goal gave Glencar/Manorhamilton a six point cushion and a team as well organised as Glencar/Manor were never going to allow St. Mary’s the goal chances they needed, although Gary O’Daly went close when driving two points over the bar in added time.

Main Man: No one outstanding performances but a lot of strong displays from both teams. Brian McDonald, Pat Gilmartin, Thomas Coyle and Seamus Ryder stood out for Manor while Conor & Daire Farrell, Nicholas McWeeney, Ray Mulvey and Micheal McWeeney stood out for Glencar/Manorhamilton.

Talking Point: Glencar/Manor showed that when it comes to closing out a game, there are few better but St. Mary's will be wondering how they left this game behind them with some awful shooting at key moments. Both teams will be a major factor in this year’s knockout stages.

Turning Point: Tough to decide between the failure to award a penalty or Niall Brady's goal five minutes from time. But maybe Gary Hickey's save from David Tiernan was just as vital.

Ref Watch: Eamonn O'Grady had a good outing but for two big decisions when he overlooked what appeared to be a stonewall penalty and a clear barge in the lead-up to Manor's goal.

Highlight: Both teams may have been through to the quarter-finals but they produced a free-flowing contest that was entertaining to the very end.

Lowlight: Some of the wides from both teams were very disappointing.