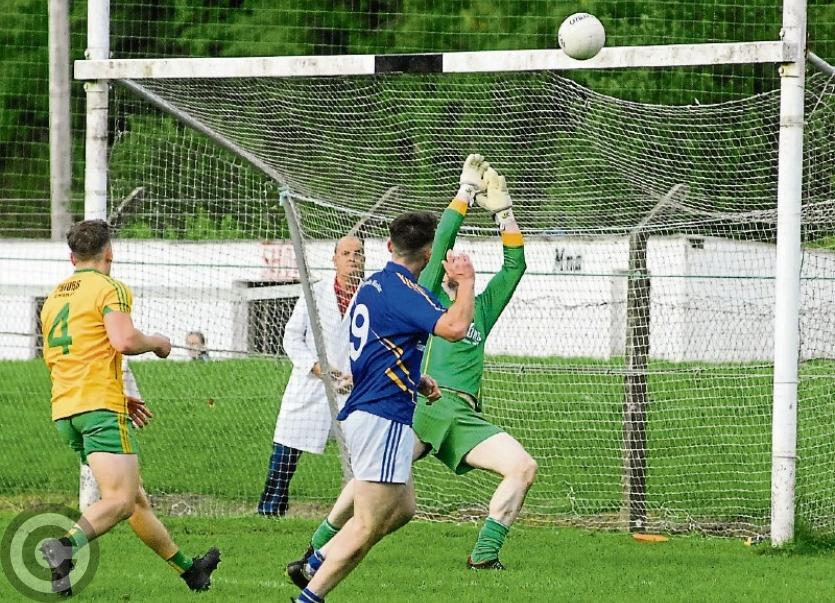 Aughawillan laid down another statement of intent in Cloone on Saturday evening as they saw off the challenge of Ballinamore Sean O'Heslin's in Cloone in what proved to be a high octane encounter.

The opening stages were action packed to say the least with a particularly high standard to the shooting on display. Incredibly ten scores were registered within the opening eight minutes and there was little let-up in terms of the action over the course of the encounter.

Ballinamore always seemed to be hanging on to the coat tails of Aughawillan, even though they did lead in the early stages, but as the game progressed Aughawillan were able to give themselves some breathing room.

The intensity that Aughawillan brought against Drumreilly was apparent from the opening throw-in as they won the opening throw-in courtesy of Sean Flanagan. Fergal McTague, Stephen Gilheany and Morgan Quinn all saw the ball go through their hands before it was worked to Gary Plunkett who made light work of a tricky shot to open the scoring.

The game was only two minutes old but there were ominous signs from a Ballinamore point of view as they appeared to be struggling to get a hand on the ball. However, they were handed a lifeline when Aughawillan switched off from a free that was drilled from midfield towards the unmarked Shane Moran who then squared the ball to Mark McGrory who buried his shot into the top corner of the goal to bring the game to life.

Ballinamore quickly added to their tally with a wonderful long range Luke Murphy point before Niall McGovern pointed after a brilliant midfield catch from Wayne McKeon.

Having briefly lost their way Aughawillan hit back with points from Barry Prior and Gary Plunkett before their defence was exposed once more.

Dean McGovern found Shane Moran in acres of space and again he squared to McGrory. From a similar position to where he goaled it seemed inevitable the green flag would be raised but instead the shot flew over the bar.

Having survived that let-off Aughawillan replied with a stunning score from Mark Plunkett from and Gary Plunkett pointed to level matters with eight minutes elapsed.

The scoring rate eased off but the excitement levels didn't. In the 13th minute Aughawillan struck for their first goal. Sean Flanagan picked out Pearce Dolan whose delicate flick took the ball past keeper Denis Dolan. A further touch was needed to make sure the ball ended up in the net and Gary Plunkett was on hand provide just that.

Moments later Ballinamore came agonisingly close to another goal but Shane Moran's thunderous shot came back off the crossbar.

Further points from Barry Prior and Gary Plunkett extended the Aughawillan lead to five but Ballinamore came roaring back in the closing stages of the half.

A Mark McGrory pointed free was Ballinamore's first score in 16 minutes and it was followed with a minute of the half remaining by their second goal. An excellent catch from Stephen McTague in midfield resulted in him being fouled and he drove the resulting free towards the Aughawillan goal. Once more it was Shane Moran who caused the problems and he was able to lay the ball off to Luke Murphy who powered his shot past Colin Maguire.

In injury time Moran caused the Aughawillan defence all manner of headaches once more as he ran at pace before slotting the ball over the bar to level matters (2-5 to 1-8) at the interval.

The second half began with quick points for Aughawillan courtesy of Mark and Gary Plunkett with Ballinamore replying with a Luke Murphy free.

Aughawillan increased the intensity levels once more and Gary Plunkett fired over, when he might have found the net, but moments later he made no mistake. He did well to claim Rory McTague's delivery which was not dealt with convincingly by the Ballinamore defence and Plunkett squeezed his shot just inside the post.

Wayne McKeon hit back with a fine left footed point which was cancelled out by Mark Plunkett but even with a quarter of the game remaining the game looked to be heading in Aughawillan's favour as they enjoyed a five point lead.

A McGrory free further reduced the deficit before Aughawillan struck for their third goal to seemingly kill off the contest.

However, there was to be yet another twist when a minute later Shane Moran's delicate lobbed pass caught the Aughawillan defence flat footed and Mark McGrory was on hand to take full advantage and place the ball beyond Colin Maguire and into the goal.

A huge point from Peter Reynolds reduced the deficit to three with nine minutes to go but the Aughawillan defence stood firm and there was to be just one further score in the game as Mark Plunkett converted an injury time free to secure a deserved victory.

Main Man: Shane Moran, Liam Ferguson and Mark McGrory were to the fore for Ballinamore while Sean Quinn, Sean Flanagan and Mark Plunkett all impressing for Aughawillan with Gary Plunkett's overall contribution giving him the edge.

Talking Point: Aughawillan are undoubtedly one of the teams who can claim to have realistic ambitions of lifting the Fenagh Cup but the concession of eight goals in their last three games points to a potential area of vulnerability.

Turning Point: Hard to pinpoint one moment in a game in which just one score separated the side going into injury time. Ballinamore may point to a goal chance in the sixth minute, almost identical to the situation that presented itself when Mark McGrory netted in the second minute. However, at the second time of asking McGrory's shot was too high.

Ref Watch: A free flowing game of football was contributed to significantly by Seamus Mulhern who refereed with plenty of common sense and got most decisions right.

Highlight: The first 10 minutes were of a very high standard and produced no shortage of excellent scores from both sides.

Lowlight: It would be overly critical to pick out low points in a very entertaining contest.