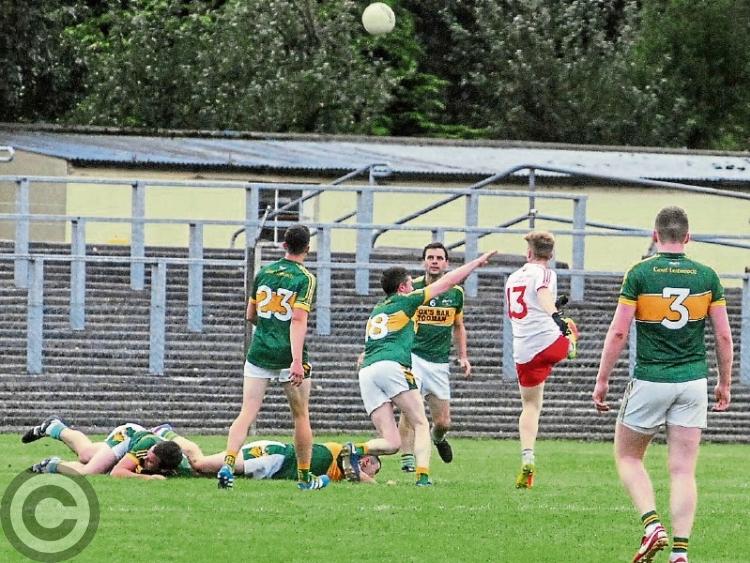 Mark Magee fires over a point for Dromahair ahead of a massed Gortletteragh defence. Photo by Willie Donnellan

Dromahair, who are consigned to a relegation battle, was simply no match for Gortletteragh in this clash and slumped to their fourth heavy championship defeat in a row. Gortletteragh now face a winner takes all clash with Drumreilly in the final round where a point will be enough for Gortletteragh to reach the quarter-finals.

Saturday’s game was decided very early on as the Gortletteragh men ran riot and went on to knock over an unanswered nine points before a Dromahair outfit that was completely at sixes and sevens eventually opened their account.

Evan Ward and Cian Clinton swapped points before Dromahair had a let off when sub Jack Heslin blazed a twenty-seventh minute goal chance narrowly wide. But Conor Reynolds increased the Gortletteragh lead further almost immediately when he shot over from play.

A twenty-eight minute off-the-ball incident resulted in Dromahair’s Terry O’Rourke getting a yellow card. Gortletteragh struck for their first goal a minute later when Niall Woods finished a well-orchestrated move to the Dromahair net.

At the break, Gortletteragh enjoyed a very commanding 1-14 to 0-2 lead over a shell shocked Dromahair outfit. Gary Clinton slightly reduced the deficit when he shot over for Dromahair within two minutes of the restart.

A minute later a Gary Fowley goal chance was denied by alert Gortletteragh goalkeeper, Niall Tiernan whose shins deflected Fowley’s strike to safety. Padraig Gallagher increased Gortletteragh’s lead when he shot a thirty-sixth minute point and two minutes later hammered home a goal after being put through by Cathal McCrann.

Dromahair enjoyed a small purple patch between the forty-second and forty-fifth minutes when they hit three points without reply from Gortletteragh. In this spell Gary Clinton and Martin Feeney put over Dromahair frees while Cian Clinton shot a point from play.

After that over the next ten minutes Gortletteragh did not show any mercy to Dromahair. In this period Francis Flynn converted a free; Jack Heslin hit a rebound to the net with Cathal McCrann and sub, Keoghan McGovern also adding a goal a piece while Colm Duffy shot a point, as well.