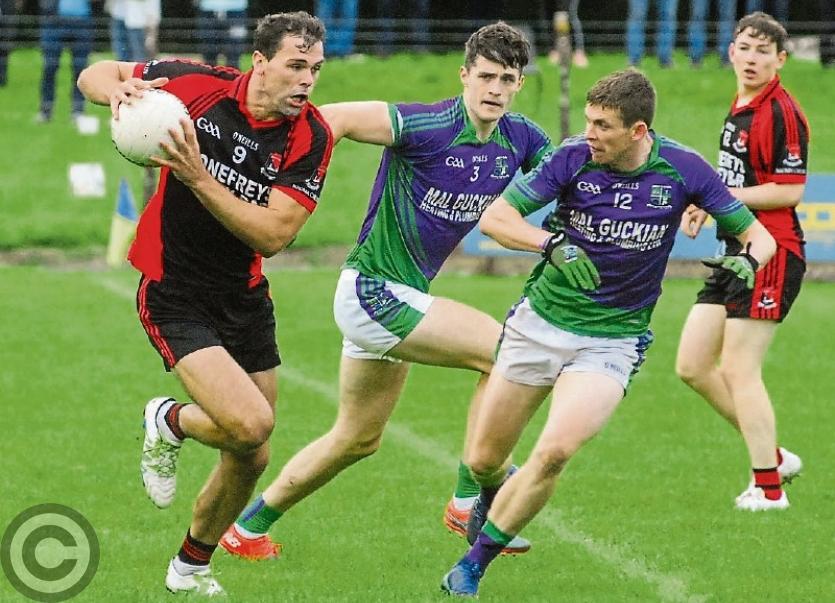 Having comfortably dismissed the challenge of everyone who came in their way up to this point , Fenagh were brought back down to earth with a bang on Saturday in Cloone when they were well beaten by clinical and very well drilled Leitrim Gaels.

In the lead up to the match, the talk was of whether Fenagh man and Leitrim Gaels manager Bobby O'Rourke would be able to devise a plan to keep tabs on nephew Ryan and son Riordan. It transpired that Ryan didn't play, making Bobby's and Leitrim Gaels job that bit easier.

However, to single out the absence of one player as key to the outcome is to do Leitrim Gaels a disservice as they were hungrier, more organised and ultimately much more clinical.

The game began with Fenagh full of running and they opened the scoring inside two minutes Donal Wrynn and Niall Butler combined to released Jarlath Scollan who struck accurately .

Leitrim Gaels opened their account from an eight minute Eunan Treacy free but Fenagh were still edging matters at this early stage and regained the lead with a Riordan O'Rourke point. Treacy replied immediately with another free after a foul on Shaun Chandler.

With the game waiting to burst into life Fenagh regained the initiative when Donal Wrynn embarked on a run through the heart of the Gaels defence before picking out Martin Doonan who pointed.

The scrappy nature of the contest was highlighted by the next score and it proved to be a crucial one as Leitrim Gaels found the net to give them the lead. There appeared to be little danger when Shaun Chandler gained possession in front of goal less than 20 metres out. His scuffed shot deceived Fenagh goalkeeper Paul Gill and crept just inside the post.

Another Eunan Treacy free saw Leitrim Gaels open up a three point lead although that score was soon cancelled out by a Riordan O'Rourke free.

The final 10 minutes of the half were largely forgettable with James Flynn (45) and Colm Moreton pointing for Leitrim Gaels and Riordan O'Rourke converting another Fenagh free to give the Gaels a 1-5 to 0-5 lead.

Leitrim Gaels were the quicker out of the blocks when the game resumed and points from Aidan Flynn and Shaun Chandler saw them open up a five point lead.

Fenagh needed a moment of inspiration and it was provided by Donal Wrynn two minutes into the second half. Wrynn rose to get the slightest touch to divert Shane Doonan's delivery beyond Brendan Flynn and into the goal.

That goal reignited the Fenagh challenge and two pointed frees from Riordan O'Rourke drew them level before Martin Doonan struck to edge Fenagh back in front.

However, it was Leitrim Gaels who were to boss the final 20 minutes. After Aidan Flynn's excellent 39th minute individual goal, Leitrim Gaels visibly grew in confidence.

As Fenagh attempted to fight their way back into contention they were met by a green and purple wall that was practically unbreachable. Up to 14 Leitrim Gaels players were to be found inside their own 45 when necessary and they were able to break with devastating effect as was the case when Aidan Flynn was on the end of a counter-attack to score Leitrim Gaels third goal in the 56th minute.

A wonderful score from James Flynn opened a 10 point lead before Martin Doonan replied with a Fenagh point.

It was to get worse from a Fenagh point of view when corner back Diarmuid McHugh was sent off and Eunan Treacy and Riordan O'Rourke kicked pointed frees for their respective sides.

Main Man: Hard to look beyond Aidan Flynn who was very effective for Leitrim Gaels, particularly in the second half.

Talking Point: Two of the favourites for the Intermediate Championship went head to head and ultimately there was a clear winner. However, if the teams are to meet again expect Fenagh to be much closer come the final whistle.

Turning Point: Aidan Flynn's first goal, arriving in the 39th minute was crucial and all his own work. His strong run at the centre of the defence went unchecked and he applied a deadly accurate finish to regain the lead for his side at a crucial stage.

Ref Watch: Kevin Mallon had no option but to show a red card to Diarmuid McHugh but there were complaints from a Fenagh point of view that incidents were missed in the opening half.

Highlight: With six minutes remaining David Bruen released Aidan Flynn, who terrorised the Fenagh defence throughout the second half, and with the defence marked absent he rounded the Fenagh goalkeeper before dispatching the ball into an empty net.

Lowlight: Diarmuid McHugh was given his marching orders after lashing out a Leitrim Gaels player on the ground and in the closing stages. It was an unfortunate end to the game and the incident was clearly born out of frustration rather than real malicious intent but referee Kevin Mallon had no option but to issue a red card.