Annaduff back on track as Kiltubrid suffer first loss 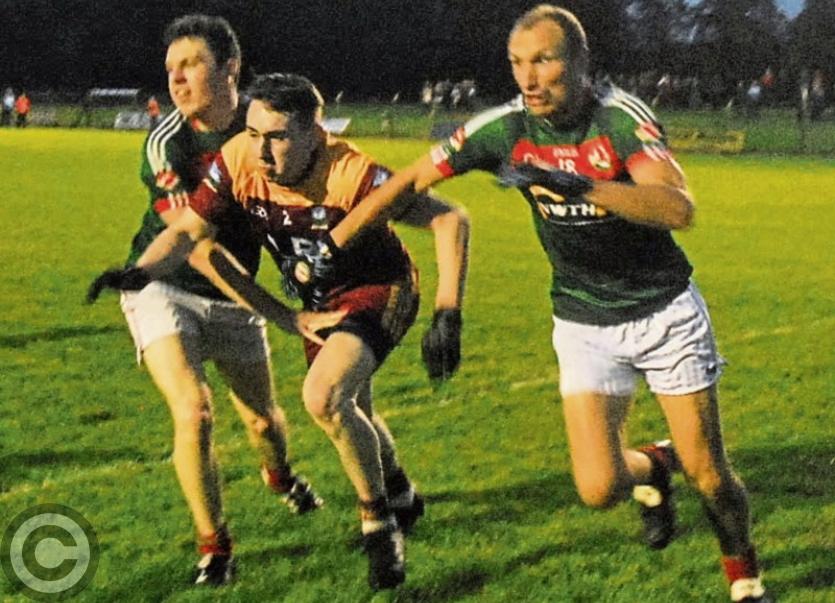 Battling for the ball in Cloone. Photo by Willie Donnellan

Annaduff got back to winning ways with a win over Kiltubrid last Friday evening that looks straightforward on paper but was a much tighter game than that.

Annaduff raced into a five point lead inside two minutes to give them the perfect start but they had to work hard to hold off a determined Kiltubrid who had enough goal chances to cause the winners some trouble.

After defeat in their previous outing, Annaduff showed enough resolve in the face of a resilient Kiltubrid challenge to get the win they needed to book their Quarter-Finals place.

For Kiltubrid, they will wonder what might have been had Emmet Mahon not injured himself in the act of kicking a free on the stroke of halftime. The full-forward scored six frees but was causing the Annaduff defence real problems.

Eoin Gill put over a fine point in the first minute, followed quickly by a Conor Reynolds point. Annaduff’s start got even better when a high ball found Kenny Cox in behind the defence. He unselfishly found Alan Glancy who produced an incisive finish to find the bottom left corner of the net.

Emmet Mahon opened Kiltubrid’s account from a free and he would go on to swap points with Kenny Cox and Eoin Gill inside the first nine minutes, Mahon scoring all from frees and Gill firing over after a great move that started from a kickout.

Sean McNabola’s intercept set up Cox for a fine point but Annaduff could thank keeper Darragh Burke for making an excellent save from Mickey Earley on 14 minutes.

Eoin Gill extended the lead but Kiltubrid would hit with three points in a row, Mahon putting over a free, Pat Moolick pointing after good work out the field and Kealon McKeon scoring a lovely point off the side of his foot.

That left a goal between the teams but Annaduff responded with Sean McNabola firing over before Mahon swapped frees with Sean Duignan. Annaduff surged with points from Gill and Cox with Kealon McKeon knocking over an injury time free for Kiltubrid.

That meant Annaduff led 1-10 to 0-8 at the break but Kiltubrid lost Emmet Mahon to injury but it was Kiltubrid who started better but missed a few chances. Six minutes in, Eoin Gill opened the scoring with a fine point.

Annaduff needed keeper Darragh Burke to deny Kiltubrid a goal that would have got them back in the game when he made a good save from James Gill but Annaduff promptly broke down the field for Sean Duignan to point a free.

Kealon McKeon (free) swapped points with Alan Glancy before Owen Dolan put over a free to leave six points between the teams midway through the half.

To their credit, Kiltubrid kept plugging away and James Gill saw a shot heading for the top right hand corner deflected over the bar by Conor Reynolds. It was their last score and Annaduff, despite a lot of pressure, saw out their victory with points from Gill and Glancy.