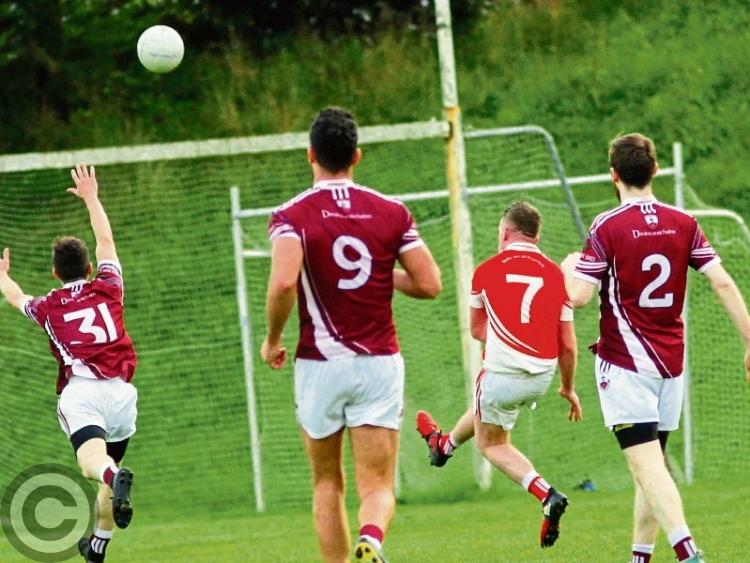 Padraig Cornyn scores the vital match winner for Ballinaglera despite the attempts of Drumkeerin's Glen Kavanagh to block the shot. Photo by James Molloy

In an exciting and thrilling game that swung one way and then the other was decided in added time when Padraig Cornyn scored the point that kept Ballinaglera’s Championship dreams alive.

A draw would have booked Drumkeerin’s place in the Quarter-Finals and sent Ballinaglera to the relegation semi-finals after they twice recovered from five and four point gaps to tie the game as the clock turned 60 minutes.

But in a dramatic finale, Ballinaglera brilliantly worked the ball from the kickout through several pairs of hands before Cornyn lofted high over the bar for a winner that keeps their quarter-final hopes alive.

Ballinaglera need a win in their final game against Aughavas while both Drumkeerin and Cloone, on four points, need a result against Fenagh and Leitrim Gaels respectively to secure one of the two places up for grabs.

Drumkeerin opened the scoring with a Cathal McCauley point after a short fifty routine with Paddy McHugh but it was Ballinaglera who were on fire with Enda McGuire firing over the bar a minute later, quickly followed by a Seamie McMorrow free.

McGuire and McMorrow were both on the mark again before Ballinaglera extended their lead to five points inside the first ten minutes thanks to long range bombs from Patrick McGrail and Padraig Clarke.

Cathal McCauley steadied Drumkeerin with a tenth minute free but Wayne Reynolds restored the five point lead after twisting and turning to avoid his marker. It could have been better for Glera but John Crawford saw his shot from a tight angle cannon off the woodwork.

Drumkeerin were starting to dominate the middle of the park and after McCauley and McMorrow swapped frees, Drumkeerin finished the half with three points from Cathal McCauley, two from frees, to leave the halftime score at 0-8 to 0-6 at the halftime interval.

Drumkeerin again started better at the start of the second half with Colm Clarke firing over a lovely point but Seamus McMorrow hit back with a free before Conor O’Brien made a great save to deny McCauley a certain goal.

McMorrow converted another free and Ballinaglera stretched the lead back to four points when John Crawford finished a good run with a point after ten minutes.

But Drumkeerin would not lie down and two McCauley frees closed the gap before Jamie Langan fisted over a point on 17 minutes to leave just a point between the teams, setting up a frantic finale.

The game was precariously balanced when Enda McGuire scored a great point but a monster free almost 50 yards out near the sideline from Cathal McCauley tied the scores for Drumkeerin again.

From that kickout, Ballinaglera put together a wonderful move with the ball going through several pairs of hands before Padraig Cornyn fired over a dramatic winner.