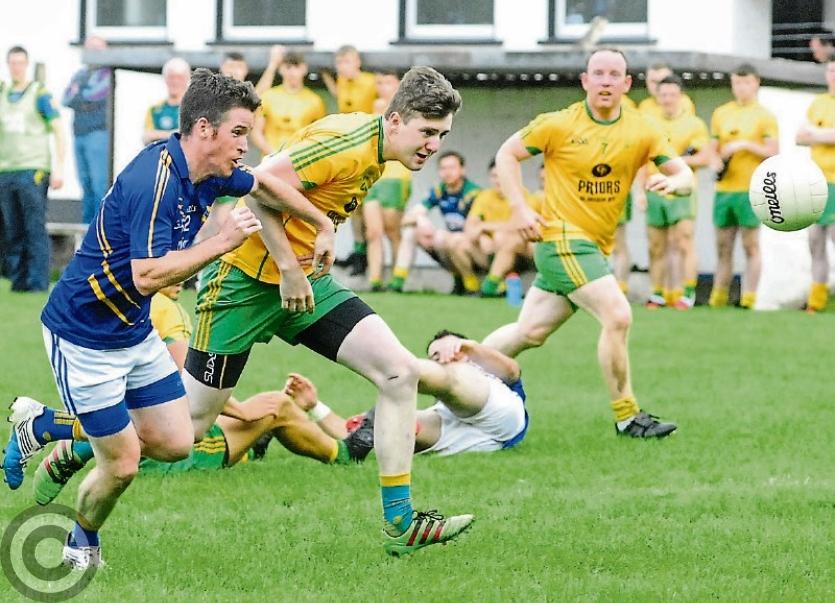 Barry Prior battles with Oisin McCaffrey for the ball. Photo by Willie Donnellan

In Group one of the Connacht Gold Senior Football Championship, there is a three way battle in store to determine who will secure the final two places in the quarter-finals and who will slip into the relegation semi-final.

After Allen Gaels' heavy defeat at the hands of Aughnasheelin, both of those teams, along with Melvin Gaels go in to the final round of games knowing a place in the last eight is still attainable with two places available for the three clubs.

After victory over Bornacoola, either side of defeats against Glencar/Manorhamilton and St Mary's, Aughnasheelin kept their last eight hopes very much alive with an impressive 1-17 too 1-9 win over Allen Gaels last Saturday evening in Ballinamore.

Aughnasheelin's big win, coupled with Melvin Gaels' 3-14 to 0-8 win over Bornacoola means there is a very real possibility of scoring difference being needed to determine who will advance to the quarter finals and who will be scrapping it out in the relegation semi-finals.

Allen Gaels' fate will be decided when they meet table toppers Glencar/Manorhamilton.

Should Allen Gaels defeat Glencar/Manor they will have amassed six points and will book their place in the quarter finals. However, should they suffer defeat they will be anxiously waiting to learn the result from the Aughnasheelin v Melvin Gaels match.

Should Aughnasheelin emerge victorious they would move up to six points and would book a place in the last eight. It would also mean that the last place in the quarter-finals would go to the Drumshanbo outfit.

However, should Melvin Gaels claim victory, then it starts to get interesting, very interesting!

Should Melvin Gaels win against Aughnasheelin and Allen Gaels lose to Glencar/ Manor then all three of those teams would finish with four points meaning scoring difference would be needed to decide who would advance.

At the moment Melvin Gaels have a difference of +2 meaning a win over Aughnasheelin (-6) would guarantee them a place in the quarter finals while Aughnasheelin would have to hope that Allen Gaels, who have a zero points difference, suffer a heavy defeat against the already qualified Glencar/Manorhamilton.

So it's all to play for!

In Group two Mohill overcame Drumreilly but left it late to do so before emerging with seven points to spare as they won 2-13 to 1-9. There wasn't much between the teams at halftime with Mohill again struggling to put away Drumreilly's challenge as they did in last year's semi-final

With the exception of their defeat at the hands of Gortletteragh, Mohill have impressed as they advanced through the group stages.

For Drumreilly, who have once again defied the odds, a place in the quarter finals is still very much within their grasp as they face Gortletteragh in a straight battle for the fourth and final place in the last eight.

A resurgent Gortletteragh have impressed in recent weeks with an impressive win over Mohill followed by a destruction of Dromahair. A point would do Gortletteragh while only a win would see Drumreilly back into the quarter-finals.

The only winner takes all clash of the last round, it promises to be an intriguing and exciting encounter!