“We definitely weren't going to give that cup back easily” - Aine 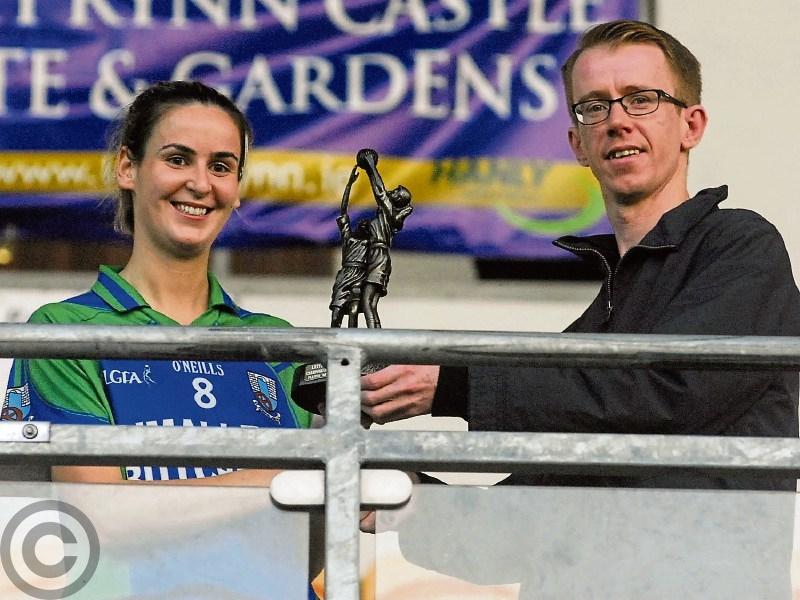 Aine Heslin is presented with the Player of the Match award by Philip Rooney of the Leitrim Observer. Photo by Willie Donnellan

A powerhouse for St Joseph's in midfield, Aine Heslin was modesty personified when talking about her player of the match performance in last Saturday's final, as she paid tribute to goalkeeper Kiera Masterson.

“It was very unexpected, my name was the last one I was expecting to be called out. I thought maybe our goalkeeper Kiera Masterson who was absolutely phenomenal. She kept us in the game in the first half.

“She made three or four goal saves and when you are trying to keep down Ailbhe Clancy and Muireann Devaney, it is not an easy task and she did absolutely brilliantly. She kept us right in there, going in at half time.”

Winning the County Championship was a hard task last year and retaining it proved every bit as challenging but Aine was quick to point out St Joseph's were determined not to relinquish their crown without an almighty battle.

“Honestly, my heart didn’t stop from the first whistle until the very end. It was tough, no matter how much you are up for it you still never think you are going to get there and cross the line. We are lucky, we have an experienced bunch of girls and we know what it takes to win a cup and to retain one now and I think we deserve it.

St Joseph's proved to be clinical in front of goal while at the other end they survived a few scares but Aine said they learned some important lessons from their semi-final win over Kiltubrid.

“ It was very end to end and we realised at half time that if we were able to keep a point or two ahead of them, keep their scores down then we were happy to keep chipping away.

“Our plan was that we wanted to go as defensive as we could in the second half. They have some very good forwards and in the semi-final, we did leak in a few goals and we knew if we could keep goals out in the second half today, we would be well on our way to retaining the cup.”

Aine also felt the number of chances missed against Kiltubrid was an important lesson learned as St Joseph's were much more economical in front of the posts last Saturday.

“We have great forwards as well but looking back we weren’t so clinical against Kiltubrid. I think 14 wides alone in the first half so we knew that was definitely something we had to improve on. Even if we took half those chances it would make a difference on the scoreboard.”