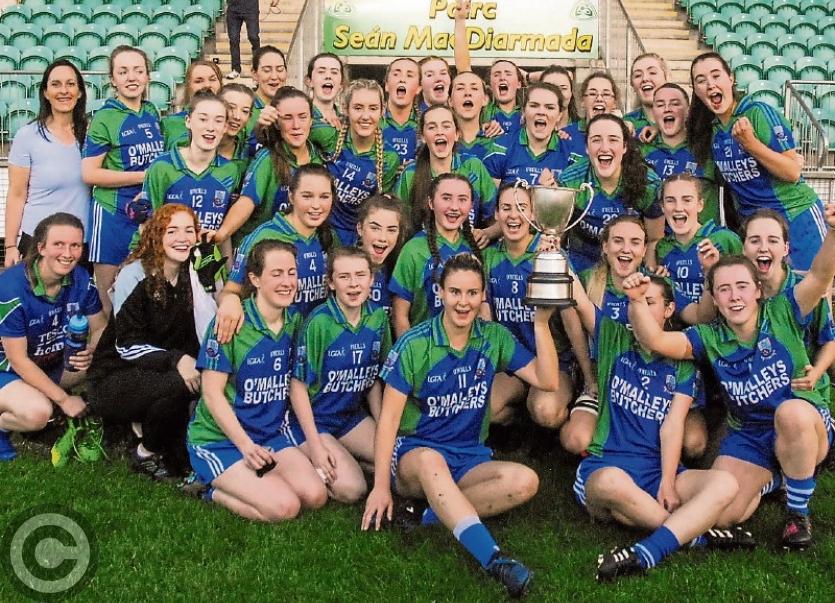 St. Joseph's players and mentors pictured with the Cup as they celebrate their victory over Glencar/Manorhamilton in Saturday's Ladies Senior Championship Final. Photo by Willie Donnellan

Last Saturday’s Ladies Senior Championship Final had been billed as the current power against the upcoming force but it was to be the defending champions who overcame the challenge as St Joseph’s saw off Glencar/Manorhamilton to retain their title.

Glencar/Manor played their part in what proved to be an absorbing contest but were left to rue a number of missed chances, particularly in the first half.

The first of those chances arrived inside two minutes but Leah Fox's shot was just wide of the St Joseph’s post.

Having survived that early scare St Joseph’s hit back with the opening point of the game when Celine Shortt and Aine Heslin linked up to release Carmel McGovern who slotted her shot between the uprights.

Glencar/Manor were more direct and almost found the net in the fifth minute but on this occasion St Joseph’s goalkeeper Kiera Masterson stood tall to deny Leah Fox.

With Glencar/Manor struggling to kick into top gear, St Joseph’s doubled their lead courtesy of a Deirdre Moran point.

Glencar/Manor were finding it difficult to play through the well organised defence but were able to pick out areas of weakness when they delivered quick ball.

A quick free from Leah Fox released Muireann Devaney who shrugged off Vanessa Gallogly but unfortunately for Glencar/Manor, Devaney dragged her shot wide.

At the other end of the pitch Glencar/Manor opened their account in the 17th minute when Muireann Devaney converted a free after Orlaith Kelly was fouled but that was soon cancelled out by a Bronagh O’Rourke free.

Further goal chances came Glencar/Manor’s way but converting them was proving to be a frustrating task with Muireann Devaney denied twice by Kiera Masterson in the space of three minutes.

Those misses were to prove costly as with six minutes of the half remaining St Joseph’s struck for the opening goal. Carmel McGovern’s pass fell nicely for Deirdre Moran who calmly evaded the attention of Glencar/Manor goalkeeper Ailbhe Sheridan before dispatching her shot to the empty net.

The first half scoring was completed when Moran was again on the end of a well worked move to give her side a 1-4 to 0-1 lead at the break.

A Muireann Devaney pointed free helped restore some confidence to the Glencar/Manor players and supporters but there was plenty more drama for both sets of supporters to celebrate and endure.

The second half was barely four minutes old when St Joseph’s struck for their second goal to open up an eight point lead. Aine Heslin’s quick free broke to Ciara Maguire whose shot from 13 metres didn’t appear as though it would cause much danger but it bounced off the turf and squirmed its way just inside the Glencar/Manor post.

With the strong setting sun briefly making life difficult for players and spectators alike, Glencar/Manor pounced for a goal that gave them a much needed lifeline as Ailbhe Clancy picked out Siobhan Feely who dispatched her shot past Masterson.

However, there was to be a blow for Glencar/Manor within a minute as St Joseph's replied with their third goal of the match with Ciara Maguire striking decisively.

To their credit there was no sign of any white flag being raised by Glencar/Manor and they hit back with a pointed free from Ailbhe Clancy and with a little over a quarter of the game remaining they were given a huge boost when Muireann Devaney goaled after Ailbhe Clancy’s speculative effort wasn’t dealt with by Kiera Masterson.

Having soaked up plenty of pressure, St Joseph’s responded with a Bronagh O’Rourke point to lift the siege and with 11 minutes on the clock Michelle Heslin was on hand to point with an excellent long range effort after patient play involving Aine Heslin and Deirdre Moran.

Trailing by six points and with time against them, Glencar/Manor went back on the attack and reduced the deficit with two further points from Ailbhe Clancy, one of which was from a free.

However, St Joseph’s were not to be denied and they responded brilliantly, showing all the experience of painful Championship defeats and the know how from having got over the line last year.

Main Woman: Kiera Masterson, Vanessa Gallogly, Michelle Heslin and Deirdre Moran all shone for St Joseph's while Annette Ferguson, Orlaith Kelly, Emma McLaughlin and Muireann Devaney were among those to impress for Glencar/Manor. Aine Heslin gets the nod following a composed midfield performance, seemingly always available to support a team-mate and full of running for the duration of the game.

Talking Point: Goals win games! The old saying was proved  true in Pairc Sean as Glencar/Manor spurned a number of excellent chances while St Joseph's were more ruthless and clinical throughout.

Turning Point: St Joseph's third goal proved to be crucial. Ciara Maguire raced on to a long ball which saw Glencar/Manor goalkeeper Ailbhe Sheridan leave her goal in an attempt to avert the danger. Maguire was the quickest and she got a slight touch to knock the ball past Sheridan before dispatching the shot to the net.

Ref Watch: Although it was a hard fought encounter it proved to be a relatively straightforward afternoon for Pat O'Toole.

Highlight: St Joseph's brought their shooting boots to the final and Michelle Heslin's point 11 minutes from time was as good as any scored. With her team leading by five points she struck from distance after good play involving her sister Aine and Deirdre Moran.

Lowlight: Glencar/Manor will look back with frustration on a number of missed chances but the biggest disappointment is that due to sanctions taken against the County Board, St Joseph's will not be able to represent Leitrim in the Connacht Club Championship.