Gortletteragh too strong for battling Ballinamore 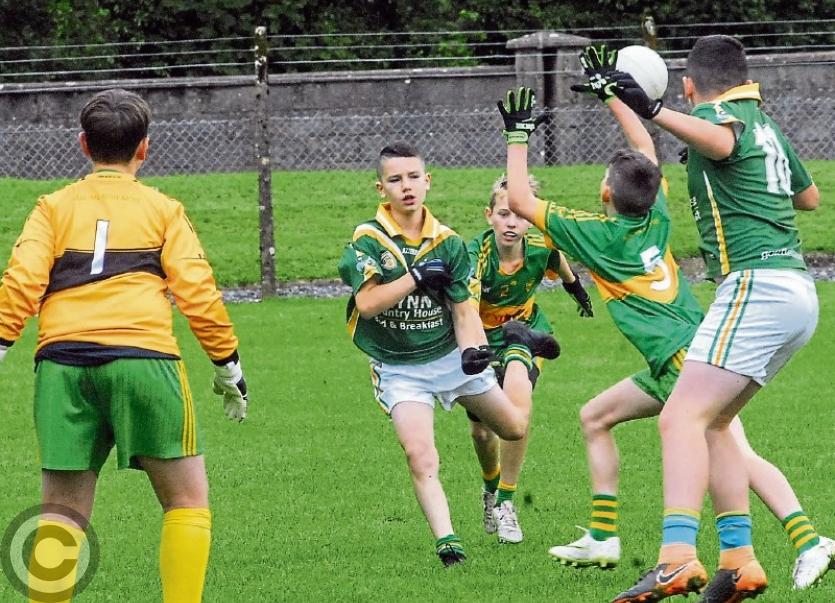 Noah McNulty passes the ball across the face of the Ballinamore goal. Photo by Willie Donnellan

A good start is half the battle, it is also what propelled a strong Gortletteragh side to victory over a battling Sean O'Heslin's in Cloone last Saturday.

Gortletteragh's physical power in key positions and greater strength around the field were vital factors in their victory over a Ballinamore Sean O'Heslin's side who refused to give up but lacked the power of their opponents in Cloone.

Gortletteragh raced out to a five point lead inside the first seven minutes and while Ballinamore closed the gap to three points on two occasions, they were always chasing the game against a team who could afford to sit back and hit their forwards on the break.

Jack Reynolds in the middle of the park particularly stood out, scoring six points and dominating that sector of the field while Luke McManus was also very impressive in defence.

Upfront, Noah McNulty caught the eye while Ballinamore were never truly able to subdue the power of Riaghan Ward and Adam Reen.

For Ballinamore, Gavin Darcy and Paul Honeyman drove them forward at every opportunity, Naoise McManus had his moments while Dessie Wisely also impressed in defence.

Gortletteragh came bursting out of the blocks with Noah McNulty firing over three points in the first four minutes, just one from a free. The impressive Jack Reynolds then fired over a good run following an interception.

Riaghan Ward converted a free for Gortletteragh but Ballinamore managed to steady themselves on ten minutes when Naoise McManus scored a fine point and then added a quick free.

Ballinamore keeper Kayelon Murray made a good save to deny Ward a goal before Jack Reynolds converted a 'fifty'. Paul Honeyman scored a lovely point but Gortletteragh responded with points from a Reynolds 'fifty' and Adam Reen.

Gavin Darcy and Tommy Smith pulled back points for O'Heslin's but another Reynolds points left Gortletteragh with a 0-9 to 0-5 halftime lead.

Ballinamore needed a good start but both Honeyman and McManus saw close range shots saved by the Gortletteragh defence early in the second half.

And Gortletteragh put the game to bed after seven minutes when, after McNulty put over a free, Gortletteragh intercepted the kickout and two passes later Adam Reen was firing a bullet shot to the Ballinamore net.

Darcy and Reynolds would swap points before McNulty and Reynolds extended the Gortletteragh lead. Gavin Darcy saw a shot come off the top of the crossbar while Noah McNulty received a yellow card for a late challenge.

Paul Honeyman and Ronan Ward swapped scores but two more Honeyman frees closed the gap further. Adam Reen responded with a free but with Ballinamore charging forward in waves, Gortletteragh were defending quite a bit.

Honeyman put over another free while Gavin Darcy pointed to leave just six points between the teams.

Ballinamore's Michael McBrien was unlucky with a goal chance after the ball bounced around the Gortletteragh defence but the winners had the final word when they broke clear and Riaghan Ward scored the final point in the contest.

Main Man: Jack Reynolds was the main man for Gortletteragh, his aerial ability and power in the middle of the park allied with some great point scoring. Noah McNulty, Luke McManus, Riaghan Ward and Adam Reen all made big contributions. For Sean O'Heslin's, Gavin Darcy and Paul Honeyman were very good in the middle of the park while Naoise McManus shone at times in attack. Dessie Wisely & Michael Keegan also did well.

Talking Point: There are no penalties in U13 football  but sometimes you wonder about that rule. Sean O'Heslin's were chasing the game and three times they had players fouled in close to the goal and frees awarded instead. It is the rule but you wonder what might have happened had Ballinamore got three spot kicks instead of frees? Maybe something for the powers that be to consider.

Ref Watch: T.P. McLoughlin had a solid enough outing, infuriated both teams with some calls around over-carrying and tackling.

Lowlight: Not too many to be honest, it may be disappointing to see a town team like Ballinamore at 13-a-side but, apart from five or six clubs, it is a sign of the times for many clubs in the county.