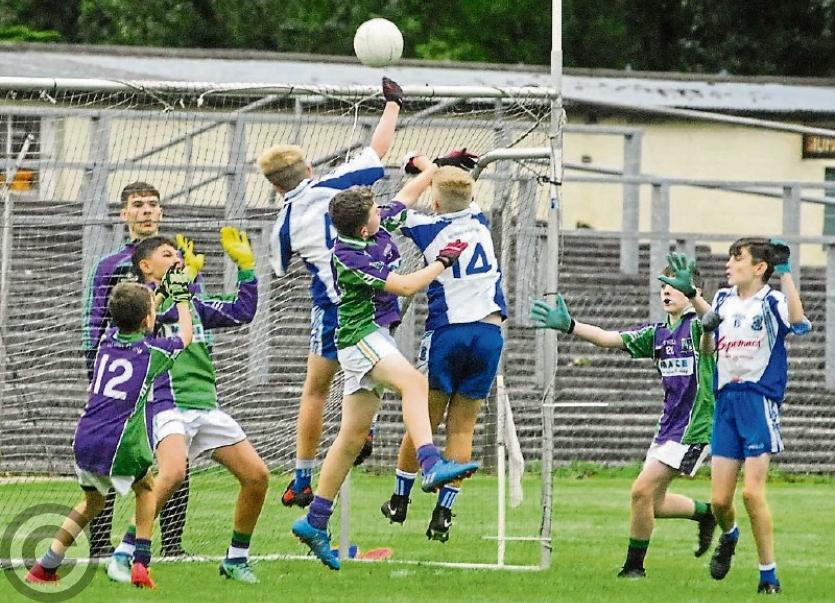 St. Mary's may have completed a League and Championship double last Friday night but they needed an injury time winner to see off a battling Leitrim Gaels in Pairc Sean Mac Diarmada.

A derby match between two of the county's biggest clubs in terms of juvenile players delivered an epic encounter that showcased two excellent teams playing some wonderful football in a game that went right down to the wire.

An injury time free in added time from Ben Guckian ensured victory for the Carrick men but it was a close run thing as Leitrim Gaels drew level in the last seconds of normal time and then missed a free to take the lead.

It was a hard way for the Gaels to lose a title but a great way for St. Mary's to win and probably the only way to separate two evenly matched teams with St. Mary's greater spread of scorers and resilient defence probably the difference on the day.

The Gaels had chances but time and time again, they found their way blocked by a hard working defence while upfront, every one of the Carrick men proved a danger.

St. Mary’s got off to a blistering start with a Dean Earley goal after just 13 seconds, keeper Brian Cull making a good save from Cian Reynolds but Earley pouncing on the rebound but Leitrim Gaels hit back in style, first with a point from Dermot Daly.

Then a good catch led to a pass to James Shanley and he tapped in from close range to put Leitrim Gaels in front.

St. Mary’s response was equally good - Cian Reynolds was again denied a goal by a great Cull save but again, the rebound fell nicely for Josh Maye for a nice finish. Gerard Murtagh added a free before Matthew Murphy & Liam Chandler fired over points.

Murtagh would convert a ‘fifty’ before Jamie Rynn and Cian Reynolds (free) swapped points. Another Chandler free followed while he also saw a shot blocked from close range, Mary’s breaking upfield where Gerard Murtagh’s high ball was tipped on to Brian Keaney for a deadly finish.

St. Mary’s halftime lead was extended with a point from Ben Guckian after Keaney was denied a goal by yet another good Cull save. That left Mary’s with a 3-4 to 1-5 halftime lead but that lead was dramatically cut within 15 seconds of the restart when Chandler soloed through for an excellent goal.

The gap went up to four when good work from Deegan & Maye set up Keaney for a fine point but Leitrim Gaels hit back with two Chandler frees. The Gaels looked for goals but a disciplined St. Mary’s defence blocked another shot before Conor McLoughlin pointed.

But straight away, St. Mary’s broke downfield and good work from Dean Earley set up Cian Reynolds for a vital point. Chandler then put a free wide while Fionn Curley and Chandler both saw shots blocked in the same move.

It looked all over when Brian Keaney made a good catch and pointed to extend St. Mary’s lead to three points but with bare seconds left in the 25 minutes, Leitrim Gaels produced a good move and Ben Finn’s brilliant finish tied the scores up.

The momentum was with Leitrim Gaels but they were saw Chandler miss a free and from the kickout, St Mary's broke downfield where Brian Keaney got in behind the defence but was fouled as he tried to race clear. Ben Guckian put the free over the bar over a minute into added time to seal the win.

Talking Point: Both these clubs can look forward to the future with confidence and judging from the enormous numbers on both benches, they are well stocked for the future. Credit to St. Mary's for a League and Championship double where they showed real winner's mentality in both finals.

Turning Point: Hard to pick one in a game with so many twists and turns and maybe unfair on young players to highlight what didn't go right as a turning point.

Ref Watch: Some might quibble that Patrick Guckian didn't blow it up when it was a draw but nobody was complaining earlier when there were other chances. A good solid outing with Guckian showing empathy for young players and a firm hand. Could have issued yellows but was consistent in his approach.

Highlight: Liam Chandler got a wonderful goal just after the break while Brian Cull made a series of outstanding saves.

Lowlight: Can't say there were too many low points in an exciting contest.