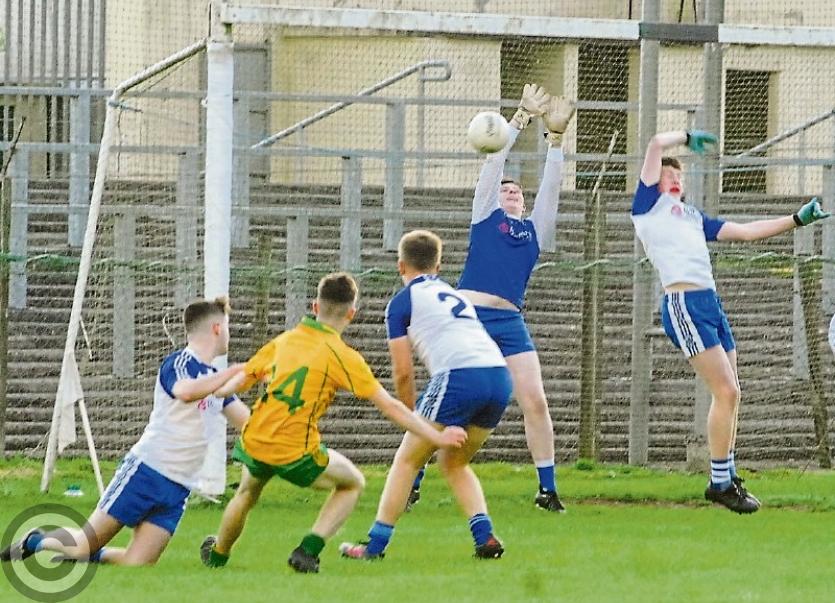 In an opening blast rarely seen at this level, St. Mary's registered an incredible 12 points, six wides, hit the crossbar and had a shot blocked - all inside the first 21 minutes of action.

St. Mary’s started off slowly with a couple of wides but once Conor Hackett found the range on a burst, set up by a Diarmuid O’Connell pass, they were up and running, Paul Keaney winning the subsequent kickout before running through, riding a challenge and then firing over.

O’Connell and Oisin Bohan both added frees to put St. Mary’s four clear before O’Heslin’s Barry McWeeney converted a free after a foul on Michael McKiernan on seven minutes.

It almost got better for Ballinamore as McKiernan saw a shot deflected onto the crossbar while Barry McWeeney saw his follow-up blocked. They paid a heavy price for the miss as St. Mary’s went straight down the field and Conor Hackett slotted over.

Diarmuid Kelleher availed of an intercept to loft a high curling effort over the bar before a nice pass found McWeeney, his sharp turn resulting in a fine 13th minute point. Again St. Mary’s responded immediately with Hackett soloing through to point.

St. Mary’s almost had a goal with Cian Singleton showing remarkable footwork and nimbleness to work not one but two goal chances, his first striking the crossbar while his second from the rebound was saved by a defender.

Brian King pointed nicely after a kickout was turned over and Ballinamore were finding it very hard to cope with the incessent pressure on their kickouts and defenders. Gavin Reynolds won a ball out on the wing, played a one-two and swept the ball over the bar on 19 minutes.

O’Connell and Keaney both scored good points as St. Mary’s incredibly had 12 points on the board by the 21st minute.

Barry McWeeney hit a free for Ballinamore but St. Mary’s would add a further two points from Reynolds, set up by O’Connell, and a Keaney fifty, after an O’Connell shot for a goal was blocked.

St. Mary’s keeper Sean Reynolds made a good save from McWeeney but they led by a comfortable 0-14 to 0-3 halftime lead. And they continued in that vein early in the second half with quick points from Bohan and O’Connell from play.

The game took a turn in Ballinamore’s favour when Barry McWeeney did well to field a high ball near the goal. His sharp turn caught out the defence as his shot cannoned off the hands of keeper Sean Reynolds to land in the net after three minutes.

Ballinamore would have their best phase but had two wides before McWeeney converted a free and then Tom Prior scored a fabulous point, winning the ball, soloing upfield against three defenders before turning back to hook a shot over the bar.

Conor Hackett and Dillon Beirne swapped points before Gavin Reynolds got on the end of a good move to score. St. Mary’s were weathering the storm with Hackett and Gavin Reynolds adding a point each before Barry McWeeney got Ballinamore’s last score from a free eight minutes from time.

With ten points between the teams, St. Mary’s finished with a flourish as Oisin Bohan converted a free, Diarmuid Kelleher’s surging, twisting run ended with an excellent finish to the net. There was still time for Mary’s to add points from Bohan and Keaney to fire over a point apiece to seal a comfortable victory.

Talking Point: St. Mary's completed a League and Championship double this week at U13 & U17 level - there is serious talent coming through the Carrick club's ranks after years of underachievement.

Turning Point: No real turning point as such as St. Mary's opened with an amazing 12 point blitz in the first 21 minutes. But if there was one, Ballinamore seeing a deflected shot hit the crossbar and the follow-up blocked and then St. Mary's going straight down the field to point is it.

Lowlight: The poor attendance for the premier underage competition in the county was disappointing but perhaps the Monday evening wasn't the best timing.