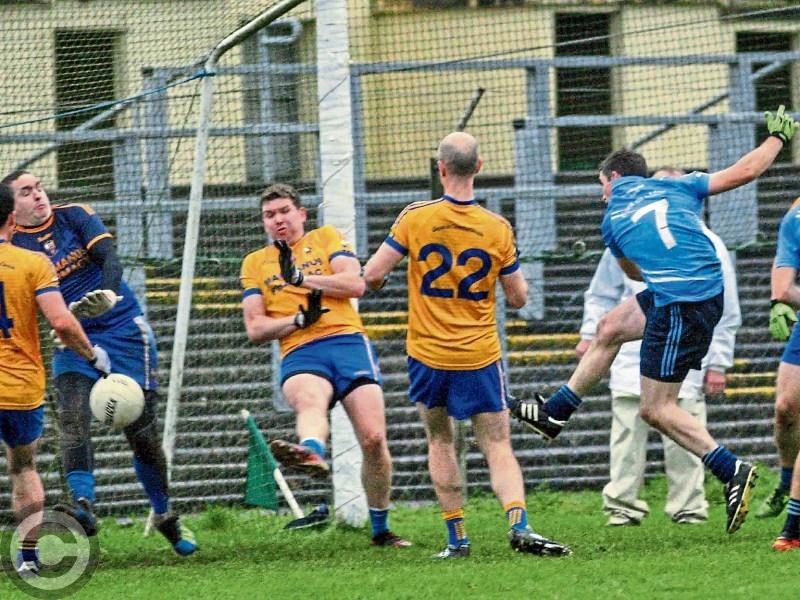 Allen Gaels' blasts the ball to the Glencar/Manorhamilton for a vital goal that ensured their place in the Quarter-Finals. Photo by James Molloy

The safety net is gone and for many fans, the real Championship begins now as we head into four intriguing ties in the Connacht Gold Senior Quarter-Finals.

Judging from chat around the county, the top two in each group are regarded as the favourites at the moment but next weekend offers the opportunity for a good old fashioned Championship shock.

The ingredients are all there - the big guns may have had an inkling who they would face but it wasn't definite and the scheduling of the final series of round robin games last weekend meant that most clubs were able to start planning what tactics they will employ next weekend.

Below we take a brief look at both games on what should be a thrilling weekend of games:

Allen Gaels started off the group impressively and have shown flashes of their ability but just not enough to pick up a few more wins. A very young team, the Drumshanbo men can trouble lots of teams but they go into the clash with Mohill on the back to two damaging losses and finding their momentum again is key to their hopes next Saturday.

We were wondering whether Mohill were beginning to lose their aura when they lost to Gortletteragh but with the return of Oisin Madden and Keith Beirne, the champions are getting back to full strength at just the right time and they have beaten all the teams considered contenders.

The Drumshanbo men will battle hard but you have to expect that Mohill’s strength in depth and scoring options from so many sectors will carry them into the semi-finals.

Have Aughawillan a preoccupation with even numbers? Title winners in 2014 and 2016, Tommy McCormack’s side look like the form team in the competition and have racked up some seriously impressive scores in doing so and their array of attacking threats looks unmatched by their rivals.

Melvin Gaels showed real resolve to battle their way to the Quarter-Finals after losing their first three games. They needed results to go their way to confirm their Quarter-Final spot and they had a tough job to do themselves against Aughnasheelin but they did it, coming from behind.

The Gaels go into this one as major underdogs, which will suit them just fine and there is enough talent in the Kinlough ranks to cause a shock but you really have to fancy Aughawillan to take the victory.

These two teams got a good look at each other last Saturday in Cloone but how much did they learn? St. Mary’s had nothing to really play for, rested some key players and won at their ease.

The pressure was on Gortletteragh and apart from one spell early in the game, they never looked in any danger. Gortletteragh see themselves as underdogs in this one and will relish that tag - remember, they took down Mohill in the group stages and the return of Jack Heslin only adds to their momentum.

Heslin will attack from deep and cause problems but St. Mary’s have impressed and apart from one or two injuries, look at full strength. They will want a firm pitch to exploit their pace and while this may be tighter than the public may expect, St. Mary’s should just edge through.

The game of the weekend and a repeat of last year’s semi-final when the north Leitrim men halted the seemingly unstoppable Ballinamore march. Sunday’s game is somewhat different - Glencar/Manor are still producing the goods, showing a clinical efficiency that few teams can match and match winners in every line of the field.

O’Heslin’s seem to be struggling for form compared to last year and the absence of so many key players for so long during the Summer can’t have helped. But there is no doubting the talent that is there in the Ballinamore ranks and if they catch fire, few teams are able to stick with them.

Group 1 did look a bit more competitive than group 2 so how that plays out is hard to know but at the moment, you have to think that Glencar/ Manor’s clinical finishing will be the difference on Saturday.