Flynn points the way for clinical and focussed Gortletteragh 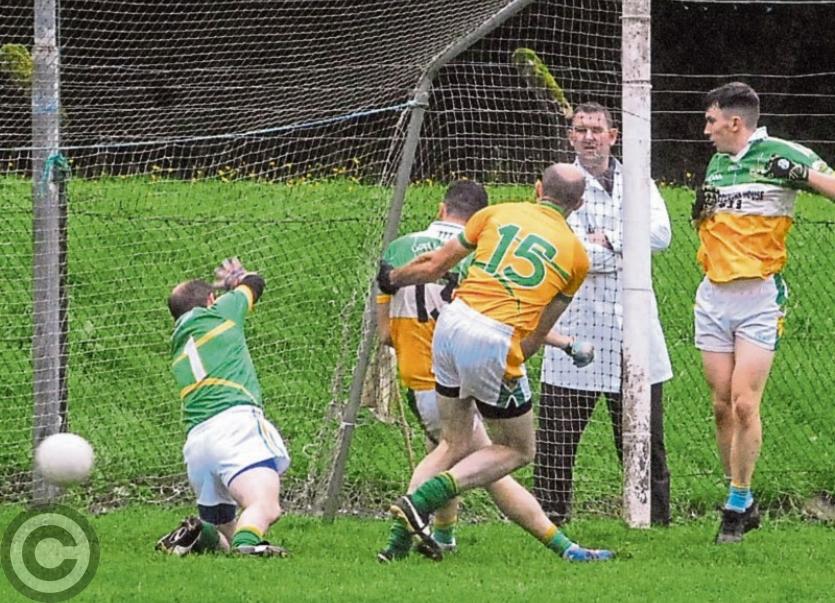 We came to Cloone expecting a war but thanks to a clinical and impressive display from Gortletteragh, we got a game that definitely did not live up to the hype!

Saturday's Group 1 promised a do or die encounter where Drumreilly needed nothing less than a win to reach the Quarter-Finals while Gortletteragh needed just a point to reach the knockout stages.

But instead of an old fashioned, full blooded championship clash of yore, the clinical efficiency and overall strength of Gortletteragh ensured a victory every bit as comprehensive and as commanding as the scoreline suggests.

Drumreilly strained every sinew of their fibre to make it a contest but a fatal flaw of fouling too much in defence meant they were always on the backfoot against a Gortletteragh team who were focussed and very up for the game.

Gortletteragh now face St. Mary's in the Quarter-Finals while Drumreilly take on Bornacoola in the relegation semi-finals.

Gortletteragh meant business early on, evident from the surging run of Jack Heslin for a nice point after just 21 seconds. A minute later, Gortletteragh were celebrating a goal, a great sweeping move that seemed to end with a shot into Drumreilly keeper Michael McGirl.

Unfortunately for McGirl, the ball bounced off his chest and Gortletteragh’s John Reynolds was on hand to snatch the ball and force home the rebound from close range.

The slippery conditions almost caught out Gortletteragh’s Barry Tiernan at the other end when Conor Gaffney’s high shot was spilled, Evan O’Connor won the ball but he was unable to force the ball past Gortletteragh’s scrambling defenders.

Padraig Gallagher surged in along the endline to fist the ball over the bar and Heslin produced another great run and score as Gortletteragh led 1-3 to 0-0 after just seven minutes.

But the game twisted a minute later - a high ball from Declan Maxwell hanging long enough and dropping short for James Holohan’s flying leap to make a connection, the ball ending up in the net.

That left a point in it and a game on our hands but then up stepped Francis Flynn to knock over three frees in the following eight minutes, penalising a series of costly fouls in the Drumreilly defence.

Francis Holohan saw a shot hit the woodwork but Gortletteragh were settled by Flynn’s accuracy and Colm Duffy and Flynn (free) added to the lead. Damon Maguire and Nigel Maguire both added points before the halftime break as Gortletteragh led 1-9 to 1-5.

Any chance of a Drumreilly upset were clinically ended by Gortletteragh in the first ten minutes of the second half as Cathal Quinn from play and three Flynn frees pushed their lead out to eight points.

Sub Olly Maguire, incredibly replacing his son Dylan, made a big impact when he won a high ball and found Conor Gaffney who was fouled. Referee Patrick Guckian awarded the penalty but Niall Tiernan made a good save low down to deny Damon Maguire the goal Drumreilly so desperately needed.

Gortletteragh made them pay with Conor Reynolds scoring a great point from the corner and Flynn pointing a free while Damian Mitchell saw his game end with a second yellow card on 15 minutes.

Frank Holohan put over a free but was instantly matched by Colm Quinn and although Drumreilly kept fighting and were rewarded by a Conor Gaffney goal, set up by another Olly Maguire catch, it was too little too late.

Francis Flynn and Cathal McCrann (50) added a free before Jack Heslin put the exclamation point on the victory when he tapped home a cross from Padraig Gallagher to seal a 12 point victory.

Talking Point: On this display, don't write off Gortletteragh - they may be underdogs but this was a strong showing under pressure. Drumreilly go into the relegation battle but they look good enough to avoid the drop.

Turning Point: This game was delicately balanced after the first quarter but three unerring frees from Francis Flynn snatched the momentum back for Gortletteragh and they never looked back.

Ref Watch: Drumreilly were unhappy with the free count against them but I thought Patrick Guckian did a good job in difficult conditions.

Highlight: Francis Flynn's metronomic freetaking was a real standout as was the thrill whenever Jack Heslin took off on a run.

Lowlight: Disappointing that we didn't get the game we hoped for but Gortletteragh saw to that!