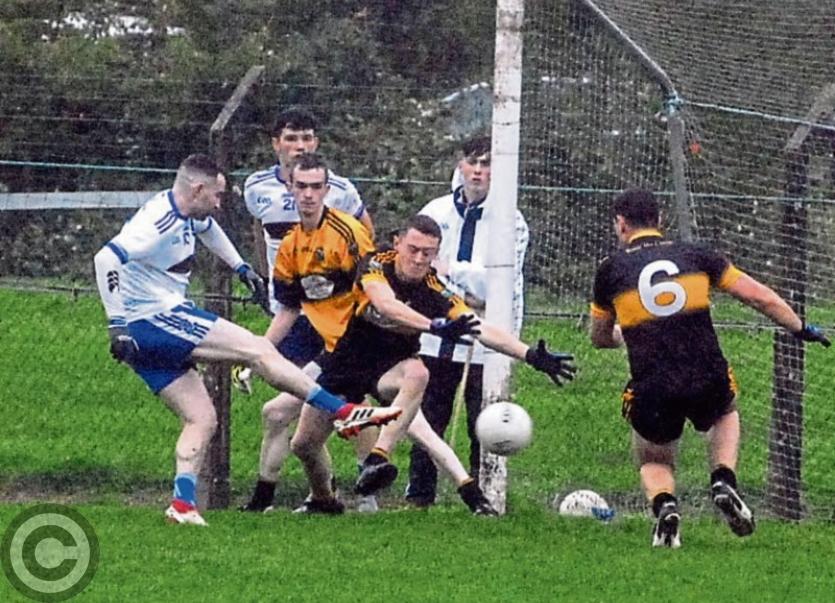 With nothing truly at stake, this was a game that won't live long in the memory as St. Mary's Kiltoghert outclassed Bornacoola in Cloone last Saturday.

Bornacoola, in fairness, may have had one eye on the relegation semi-finals while St. Mary's Kiltoghert rested a few players carrying knocks in advance of next Sunday's Quarter-Final clash with Gortletteragh.

Despite two early Bornacoola misses, St. Mary’s left nobody in any doubt of their intention to put this game to bed with Robbie Lowe cracking a shot off the crossbar before a good move involving Ray Mulvey and Jack Matthews ended with a close range Robert O’Donnell goal after just two minutes.

Alan Croghan and Brian Conroy swapped points with Matthews and James Glancy but the floodgates opened after ten minutes with two goals in the space of a minute - first good work from Mulvey and Micheal McWeeney set David Tiernan free and his dummy pass drew the keeper out of position, leaving him with a simple tap in to the net.

Barely had the cheers subsided and there was another goal - Matthews showing good hands to offload a ball in a different direction to which he was travelling, the ball finding Robbie Lowe for an easy finish to the net, 3-2 to 0-2 after 11 minutes.

It wasn’t all wine and roses for St. Mary’s as keeper Conor Glancy had to leave the action with an injured leg following a collision with teammate Fintan Earley, which later saw the corner-back also replaced.

Robert O’Donnell swapped points with Ronan Mulligan, the Bornacoola effort a brilliant score before replacement keeper William Guckian made two good stops from Liam Jones. Tiernan and Lowe would add points, Philip Howard and Anthony Mulligan matched them before Mulligan put over a third in a row for the Bors.

The half ended with a Robbie Lowe free and a Liam Jones point to leave St. Mary’s with a commanding 3-7 to 0-7 halftime lead, a lead quickly embellished with points from Michael Corrigan and Conor Farrell inside the first two minutes of the second period.

Brian Conroy scored a fifth minute point but the Bors would then go 24 minutes without troubling the scoreboard operator while St. Mary’s truly put the game to bed.

Certainly you got the sense it was Mary’s day when Jonathan Cassidy scored his first ever Championship point, a remarkable statistic given his longevity and the Carrick men would go on to add points from Mark Diffley, Robbie Lowe, Ray Mulvey, Diffley, Mulvey and Diffley again.

In between all those points, Diffley, Tiernan & Lowe worked to set up sub Gary O’Daly for a punched goal on 13 minutes.

Bornacoola, however, didn’t go down without a fight as Anthony Mulligan tapped over a free and Ronan Mulligan grabbed a consolation goal when his low shot slid under William Guckian for a late goal, Brian O’Donnell finishing the scoring with an injury time point.

Talking Point: Jonathan Cassidy's first ever championship point for St. Mary's is noteworthy for such a superb, long serving player but perhaps St. Mary's might rue the knocks suffered by Fintan Earley and Conor Glancy in a meaningless contest. For Bornacoola, they face into the relegation series for the fifth year in a row and they definitely missed Gary McCloskey on Saturday.

Turning Point: Three goals in the first 11 minutes ended whatever interest there was in this game.

Ref Watch: Anything referee Kieran Moran had to do, he did it well.

Highlight: David Tiernan's dummy that took the keeper out of it for the game's second goal was class and a moment of quality.

Lowlight: A dead atmosphere on a wet, rainy day with a tiny crowd.