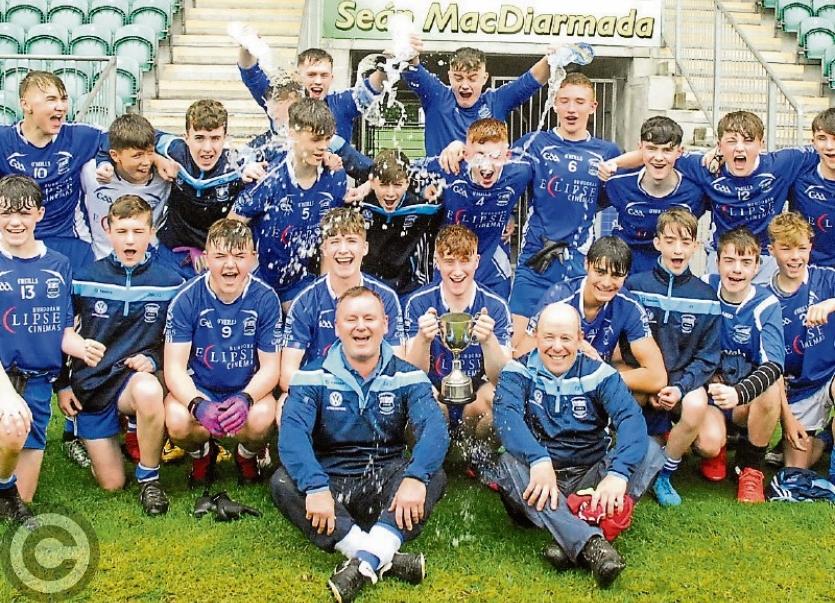 Aughnasheelin put Melvin Gaels to the pins of their collars before the north Leitrim side secured a quarter-final date with Aughawillan following a very competitive showdown in Shane McGettigan Memorial Park Drumshanbo.

Emlyn Mulligan edged Melvin Gaels back in front when he shot an eight minute point from play. Almost immediately Fintan Fitzpatrick levelled matters for a second time when he split the Melvin Gaels upright from an Aughnasheelin placed ball.

Fitzpatrick’s score initiated a strong Aughnasheelin surge that saw the South Leitrim men gain a three point advantage by the nineteenth minute. Aaron Hoare shot over on the twelve minute mark, to put Aughnasheelin ahead for the first time in the contest.

Gavin Sammon increased Aughnasheelin’s lead with another point from play five minutes later. Brendan Mulvey gave the enthusiastic Aughnasheelin fans present more to cheer about when he fired over in the nineteenth minute.

Melvin Gaels, who had played second fiddle for over fourteen minutes, hit back a minute later with a Darragh Rooney point from play. Within the space of another minute Aughnasheelin answered with a pointed Fintan Fitzpatrick free after Fabian McMorrow fouled Fergal Earley.

The south Leitrim side again enjoyed a double scores lead over the Gaels after Fitzpatrick’s free conversion.

Over the next two minutes the Gaels got right back into contention and cut the Aughnasheelin lead back to the minimum after Peter McGowan and Daithi McGloin shot a point in turn.

Before the break Fintan Fitzpatrick increased Aughnasheelin’s advantage to 0-2 when he put over a free that was awarded for a Philip McGowan foul on Fergal Earley, as Earley was bearing down on the Melvin Gaels posts.

After outplaying Melvin Gaels for most of the first half, Aughnasheelin deservedly led by 0 – 7 to 0 – 5 at the interval. The question for Aughnasheelin now was, as they headed to the dressing room for their halftime break, could they maintain their first half slight display of dominance for another 30 minutes of play?

The first shots in the Melvin Gaels second half fight back were fired by the experienced David McSharry who put over a thirty-fourth minute point. David made it a one point game and got his side right on the heels of the Aughnasheelin men in the race that was now on for victory.

Two minutes later sub Ben McGirl, who was fouled in the attempt, blazed an Aughnasheelin goal chance narrowly wide and allowed Melvin Gaels to have a let off at a juncture in the game when a ball in the North Leitrim side’s net could have seriously dented their fight back plans.

Fintan Fitzpatrick slotted over the resultant free to put Aughnasheelin two points to the good. But unfortunately for Fitzpatrick’s side they failed to score for another twenty minutes by which time Melvin Gaels had rallied to change the course of the contest.

Emlyn Mulligan led Melvin Gaels final charge for victory when he shot over a thirty-eight minute point that reduced Aughnasheelin’s lead to the minimum. Newly arrived on the field Melvin Gaels sub, Jack Roynane fired over a levelling point for his side four minutes later.

Within the space of another minute Roynane repeated the exercise to put Melvin Gaels ahead for the first time in thirty-five minutes. Emlyn Mulligan increased the Gaels advantage to 0-2 when converting a forty-eight minute free that was awarded for a Conor Cullen foul on David McSharry.

Aughnasheelin staged a late rally in a bid to pull the game out of the fire and two minutes later Gavin McWeeney cut Melvin Gaels lead back to two points when he put over a thirty-five metres free.

After that Melvin Gaels held out for the win as Aughnasheelin failed to add any further scores to their tally. Before the end Melvin Gaels Liam Ryan received a late yellow card.

Main Man: Melvin Gaels Emlyn Mulligan exhibited a special difference in class between these two sides in a very competitive contest. It was Mulligan’s leadership on the occasion that pulled the Kinlough men over the line at the heel of the hunt.

Talking Point: It was a credit to both Melvin Gaels and Aughnasheelin that they served a very keen and knife-edged contest in difficult underfoot conditions that resulted from heavy rainfall for two hours or more prior to the throw-in.

Turning Point: Starting the game in a less favourable position, it was Melvin Gaels extra bit of class up front that ensured the outcome ended for them in the securing of a championship quarter-final place and thanks largely to the performances of Emlyn Mulligan and Darragh Rooney.

Ref Watch: Seamus Mulhern was an impartial man-in-the-middle in a generally sporting contest. But he allowed too many handbag and backchat incidents to go unchecked when he should have issued yellow cards to the perpetrators.

Highlight: Both sides in the last fifteen minutes put their bodies on the line and showed how they were fighting for dear life to stay in the championship. At this juncture of the battle the overcast conditions led to poor daylight when everything was being pegged into the melting pot to secure a victory.

Lowlight: Slight scuffles between some rival players caused too much time wasting at a few junctures in the contest. These should not have been allowed to do so in the interest of preventing some un-necessary gamesmanship in an otherwise honourable game.