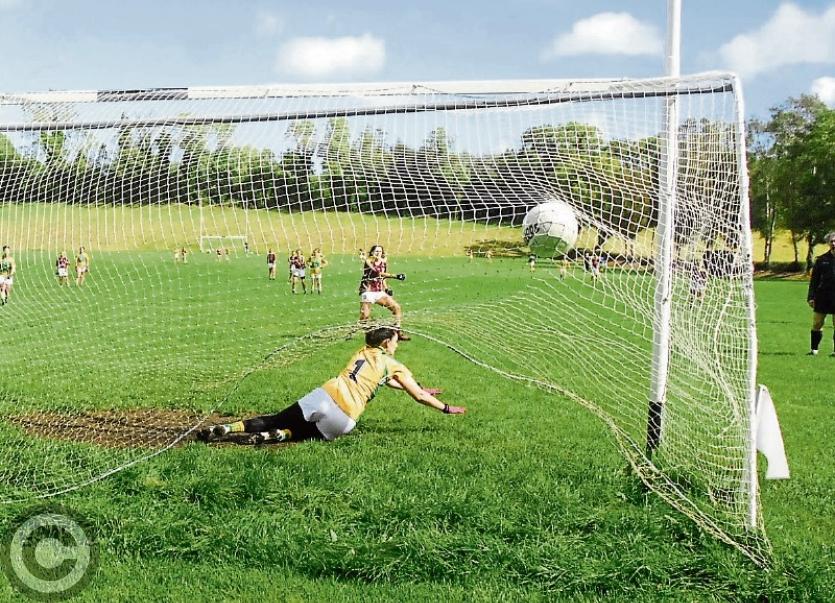 For long stages of the game both sides were left frustrated by missed opportunities before the game burst into life in the final 20 minutes in a game that truly could have gone either way but it was Annaduff who made it third time lucky, winning after suffering defeats to Glencar/Manorhamilton and Bornacoola St. Mary's in the last two years.

In what was a cagey opening, Annaduff's Vivienne Egan was the first to threaten when she embarked on a determined run towards goal but her finish didn't match the quality of her run and she dragged her shot wide.

Keeldra Gaels opened the scoring in the fourth minute with a point from Shayln Ward after Lisa Reynolds' pass but Annaduff and Egan were asking plenty of questions of the Cloone/Gortletteragh amalgamation. Sinead Reynolds and Vivienne Egan linked up well to release Chloe Dolan but her well struck shot was kept out by the crossbar.

Having survived that scare Keeldra Gaels doubled their advantage when Lisa Reynolds pointed and with the game still less than 10 minutes old they pounced for the game's opening goal with Shayln Ward's shot sneaking inside the Annaduff post past goalkeeper Lisa Rinn.

The game was 13 minutes old before Annaduff registered their first score with Chloe Dolan on hand to provide the finishing touch after good play involving Aisling Bosquette and Mairead McHugh and three minutes later they were right back in contention when they struck for goal to leave just a point between the sides.

Aisling Bosquette was heavily involved in the build-up as she exchanged passes with Sinead Reynolds before releasing Vivienne Egan who did very well to see off the attention of three defenders before placing her shot past Keeldra Gaels keeper Lorraine Moran.

Annaduff grew in confidence from that score but were let down by some wayward shooting and three successive attacks resulted in three shots going harmlessly wide.

When the opportunity arose Keeldra Gaels went back on the attack and scored two points in quick succession through Lisa Kerrigan and Shauna McGrath to open up a three point lead.

However, that lead was to be wiped out a little more than a minute later when Annaduff struck for their second goal and again it was Vivienne Egan who found the net.

Egan's run deserved a goal before her progress was halted by a defender. It appeared as though the Annaduff forward was fouled but she still got her shot off, despite being off balance and somehow the shot found its way to the bottom corner of the net.

Keeldra Gaels responded impressively with a goal of their own four minutes later. Shauna McGrath managed to get to Aine Nicholl's pass first and she was able to flick the ball over the head of Lisa Rinn who had come out of her goal.

However, it was to be Annaduff who finished the half on top with two pointed frees from Vivienne Egan and with time almost up at the end of the half another Egan free deceived the defenders and goalkeeper and dipped under the crossbar to give Annaduff a 3-3 to 2-4 half-time advantage.

Keeldra Gaels started the second half brightly but were let down by three successive wides while at the other end of the pitch Evie Russell pointed after good work from Grainne Reynolds although Keeldra responded quickly with a pointed free from Shayln Ward.

Despite the wind getting stronger in favour of Keeldra Gaels, Annaduff extended their lead when Vivienne Egan dispatched a penalty to the Keeldra goal after Grainne Reynolds was fouled.

In what was developing into an absorbing clash, Keeldra replied quickly with points from Ward (free), Rachel Reynolds and Alannah Ward to leave a point between the sides with 13 minutes remaining.

With five minutes left, Keeldra struck for their third goal when Shayln Ward converted a penalty rebound after Lisa Rinn had initially made a good save.

However, moments later Annaduff were awarded a second penalty when Keeldra were penalised for a foot block on an Evie Russell shot and again Egan was on hand to dispatch the penalty.

Further points from Aisling Bosquette, and Vivienne Egan (two) saw Annaduff open up a four point lead and with just three minutes on the clock it was hard to see Keeldra having time to stage a comeback.

However, their hopes were raised significantly when Aine Nicholl found the Annaduff goal to leave just the minimum between the sides.

Ultimately that was to be as close as Keeldra Gaels would get as Egan (free) and Mairead McHugh exchanged points at the end of the game ensuring Annaduff emerged victorious by the narrowest or margins after a dramatic and pulsating final.

Main Woman: Grainne Reynolds, Carmel Donelon, Sinead Reynolds, Evie Russell, Aisling Bosquette and Mairead McHugh were all to the fore for Annaduff while Patricia Forde, Lorraine Reynolds, Shauna McGrath and Shayln Ward all impressed for Keeldra Gaels. However, it is impossible to look beyond Vivienne Egan whose scoring exploits ultimately proved decisive.

Talking Point: With the ladies game in the county experiencing a difficult year it was unfortunate that no linespeople and just two umpires were available for a Championship Final.

Turning Point: In a game that had more twists and turns that you could imagine it is hard to pick out one turning point but Annaduff's impressive response after Keeldra  scored a penalty with eight minutes to go to open up a two point lead was impressive.

Ref Watch: Three penalties, a yellow card for Keeldra's Lisa Reynolds and a possible foul on a Keeldra player in the last seconds that wasn't given suggest a controversial afternoon for Kieran Moran but there weren't many complaints from either sideline throughout the game.

Highlight: The four goals in those final 20 minutes give an indication of the drama that unfolded as the game neared its end with both sets of supporters entitled to believe their side was on course for victory.

Lowlight: Having played such a big role in the final it was tough on Keeldra to see their efforts fall just short.