A game to savour as Ballinamore strike late to force draw 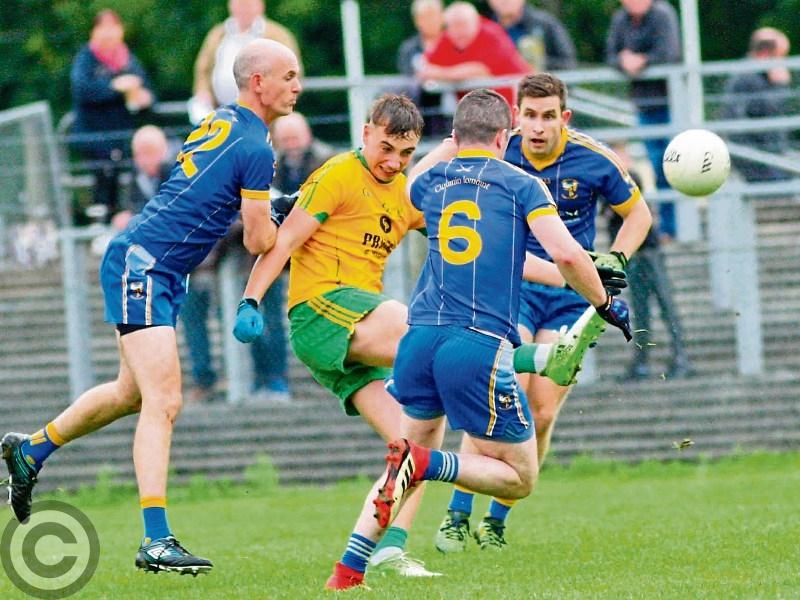 Ballinamore's Niall McGovern strikes for a point despite being surrounded by the Glencar/Manor defence. Photo by James Molloy

Leitrim's Senior Championship finally burst into life last Saturday with a game to savour as Glencar/Manorhamilton and Ballinamore Sean O'Heslin's fought out a thrilling draw.

In easily the best game of the competition so far, Ballinamore rescued a draw with four unanswered points as Glencar/Manorhamilton were left cursing some poor shooting over the hour, including hitting two frees over the woodwork.

Cliche it may be but the draw was a fair result and if the replay is half as entertaining, we'd be more than happy to watch these two teams in action again. Who has the upper hand is hard to tell but it should be another tight and tense encounter.

Glencar/Manor got out of the traps quickly with Evan Sweeney after 20 seconds and James Glancy pointing but a Shane Moran free and a Niall McGovern point had the sides level by the fourth minute.

Eight minutes, Manor struck the first big blow when they won the ball from a Ballinamore kickout and Niall Brady displayed blistering pace to outpace the defenders and plant a great shot in the net. Brady repeated the feat for a point two minutes later.

But again O’Heslin’s fought when a high ball saw Shane Moran win it, burst through while holding off two defenders and blast the ball to the top of the far corner for a cracking goal. Niall McGovern then scored a great effort to tie the scores after 13 minutes and then edged his team in front after his brother Dean won the resulting kickout.

Manor fought back - a nice Croal run ended with a point before Conor Dolan fisted over the bar on 19 minutes. Despite a missed free, Niall Brady shot over from a very tight angle to put Manor two clear.

But Ballinamore hit back with a goal - another high ball into Moran saw him manhandled to the ground and despite protests, Peter Reynolds expertly dispatched the ball to the net on 24 minutes.

Manor responded with a Dolan free and when Darren Sweeney swept a lovely point over the bar in injury time, Glencar/Manorhamilton had a 1-8 to 2-4 halftime lead.

The second half struggled to live up to the action of the first with no score for the first ten minutes and bad misses from both sides before a Shane Moran free tied the scores. Niall McGovern edged Ballinamore back in front but a quick Croal free found Evan Sweeney for a nice point.

Manor went very close to conceding a second penalty for a foul on Moran, Peter Reynolds pointing but two excellent Evan Sweeney scores inside a minute had Manor back in front after 18 minutes.

With the tension high and teams missing chances, it looked as if Manor had struck the decisive blow when a high ball into towards the Ballinamore broke down to Evan Sweeney. He ran and brilliantly offloaded to Niall Brady for his second goal to put his team four clear with six minutes to go.

Straight away, Ballinamore hit back with Niall McGovern setting up his brother Dean for a point and a minute later, Peter Reynolds put over a free to leave two between the sides. The tension was building too as Jack Cullen was black carded and Adrian Croal got a second yellow.

But with the game deep in added time, sub Luke Murphy put over a pressure free and then proved to be Ballinamore’s saviour with an excellent score at the end of a brilliant move over three minutes into added time.

Main Man: For Glencar/Manor, Evan Sweeney and Niall Brady were superb, Killian McGriskin and James Rooney very effective. Shane Moran and Niall McGovern stood out for O'Heslin's but Liam Ferguson stood head and shoulders above all with a superb display.

Talking Point: Who is better placed for the replay? Many believe Glencar/ Manor got out of jail and won't let a second chance slip but Ballinamore's confidence will have been lifted. Hard to know.

Turning Point: Hard to pick just one in a game that twisted and turned in favour of both teams. But Dean McGovern's point immediately after Manor's second goal gave O'Heslin's a lifeline.

Ref Watch: Ray McBrien did a good job in a fast moving and competitive game. He might have punished persistent fouling a bit harsher in one or two incidents but a solid outing nonetheless.

Highlight: A tie between Niall Brady's first goal and Shane Moran's three pointer - two different but equally spectacular goals that got you up out of your seat.

Lowlight: A ten minute spell at the beginning of the second half was a blight on the game while Manor will look at missed frees costing them dearly.