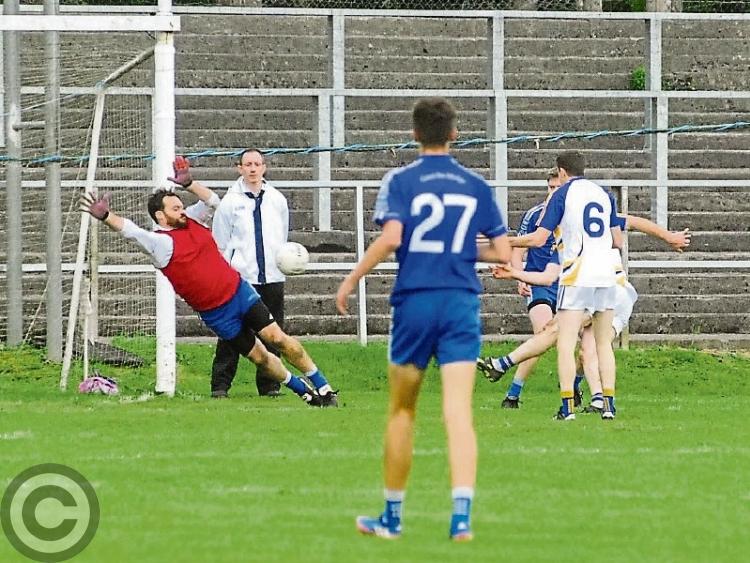 Aughawillan booked their place in the semi-final of the Connacht Gold Leitrim Senior Championship but only after an almighty battle with Melvin Gaels in Pairc Sean Mac Diarmada on Sunday last.

The experience and know-how of the Aughawillan players proved crucial and when they levelled matters courtesy of a Pearce Dolan goal with a quarter of the game remaining there was a feeling that Aughawillan would be able to find a way to ensure they emerged victorious.

Ultimately that was how the game unfolded in the closing stages. Aughawillan, playing with the aid of a strong breeze, seemed to grow in strength as the Melvin Gaels players began to visibly tire as a result of the huge effort they put in over the course of the game.

Melvin Gaels secured their place in the last eight having lost their opening three games but there was a feeling that they had played within themselves and had kept their cards close to their chest during their group games. Aughawillan on the other hand had impressed as they sailed through their group, the only real concern being the fact that they conceded eight goals in three games.

If form was the only guide being used this should have been an easy win for Aughawillan but there was a feeling this was a game Melvin Gaels had been targeting and from the opening throw-in there was a real Championship feel to this encounter.

Melvin Gaels' tactic was perfectly highlighted by the game's opening score. Fabian McMorrow, a powerhouse at centre-back in the opening half won possession deep in his own half and immediately launched a quick counter-attack with a pass to Colm McGowan who in turn picked out Philip McGowan. The ball was then delivered to Darragh Rooney who made no mistake.

Aughawillan hit back with their opening point in the seventh minute, Morgan Quinn on target after incisive approach play involving Pearce Dolan and Stephen Gilheany.

Aughawillan then took the lead for the first time moments later when Mark Plunkett pointed after a clever exchange of passes with Pearce Dolan.

The end to end nature of the contest saw Melvin Gaels reply with a Emlyn Mulligan pointed free after a foul on Fabian McMorrow but Aughawillan regained their slender advantage when Gary Plunkett burst forward from midfield before applying a deadly accurate finish.

The end to end nature of the contest saw Melvin Gaels hit back once more in the 12th minute. Phillip McGowan did very well to win possession in an advanced position and the ball was quickly worked to Emlyn Mulligan, via James Bredin, and Mulligan made no mistake with a calm finish.

Although Melvin Gaels had the wind, there was no sign of Aughawillan sitting back and waiting for the chance to have the wind at their backs in the second half.

An excellent individual score from Mark Plunkett reduced the deficit to a solitary point and that was quickly followed by further points from Barry Prior, Stephen Gilheany and Shane Flanagan as Aughawillan opened up a two point lead with 10 minutes of the opening half remaining.

In keeping with how the opening 20 minutes had unfolded, Melvin Gaels hit back with points from Liam Ryan and Mulligan (free) to level matters and they regained the lead with four minutes of the half remaining when Mulligan converted another free.

Aughawillan replied with a pointed free from Mark Plunkett but it was Melvin Gaels who finished the half stronger with a brilliant score from Cillian McGloin followed by another pointed free from Emlyn Mulligan.

Trailing 0-10 to 0-8 as the second half got underway, there was no sign of nerves coming from the Aughawillan players. They looked focussed and determined and within 12 seconds of the restart they had reduced the deficit to the bare minimum thanks to a Sean Flanagan point.

Both sides had chances to add to their tallies before Micheal Ferguson skipped past two defenders and pointing nine minutes after the restart.

Scores were proving to be much harder to come by in the second half but there was no shortage of excitement for all present in Pairc Sean to enjoy.

As they began to tire Melvin Gaels turned to their bench but the lack of experience they had to call upon proved costly.

With a quarter of the game remaining Aughawillan struck for what would be prove to be a decisive and crucial score with Pearce Dolan's goal putting Aughawillan back in front.

Melvin Gaels replied with another Mulligan free but that proved to be their final score while Aughawillan grew in strength in the closing and regained the lead with a Morgan Quinn free before victory was assured five minutes into injury time with another free from Quinn's left boot.

Main Man: Emlyn Mulligan, Patrick McGowan, Liam and Leo Ryan all shone for Melvin Gaels while Morgan Quinn, Gary Plunkett and Sean Flanagan were among those to impress for Aughawillan with Mark Plunkett the standout performer.

Talking Point: Aughawillan's scoring threat may have been dealt with relatively well by Melvin Gaels but Aughawillan will be  pleased with how solid they were defensively with Colin Maguire's goal never in any real danger.

Turning Point: Undoubtedly Pearce Dolan's 45th minute goal was the decisive moment in this contest. Mark and Gary Plunkett combined to release Dolan who produced the finish the build-up deserved as he struck low and hard past Jessie McGuinness.

Ref Watch: Patrick Guckian issued a yellow card and then a red to Peter McGowan. McGowan protested that he had not previously been yellow carded and having checked his notebook Guckian then bizarrely produced a black card for McGowan.

Highlight: There was no shortage of top class point taking and last ditch defending from both sets of players with Mark Plunkett's 16th minute point after beating two defenders arguably the pick of the bunch.

Lowlight: It is difficult to pinpoint any negatives but Melvin Gaels will certainly be disappointed that after such a strong opening half they scored just two points in the second half and only one from play.