Champions sent out a big warning 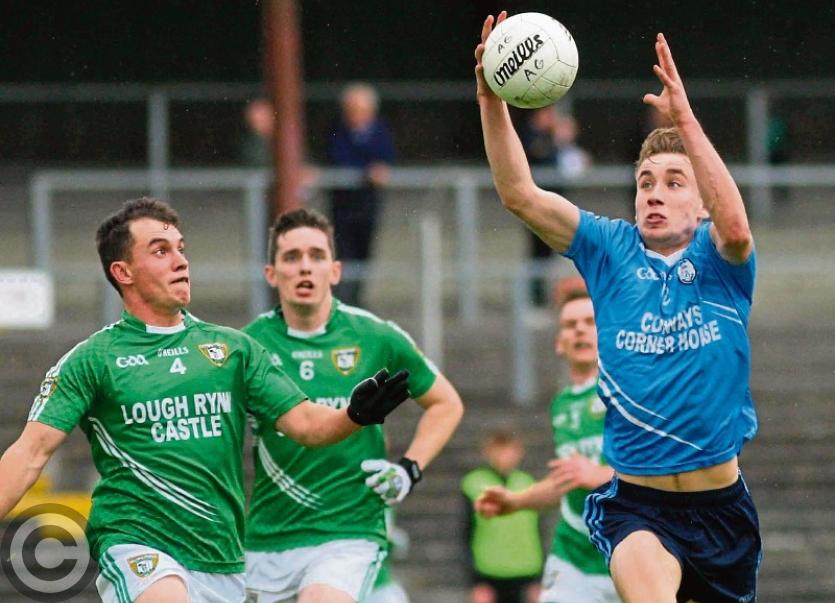 Eyes on the ball! James Mitchell of Mohill and Caleb Duffy of Allen Gaels both have their eyes firmly on the ball during last Saturday's Senior Championship Quarter-Final. Photo by James Molloy

Champions Mohill are not going to let going of their title lightly - that's the message Saturday's destruction of Allen Gaels sent out to the remaining teams in the Connacht Gold Senior Championship.

Some had wondered if Mohill were beginning to show signs of cracking after a group stages loss to Gortletteragh and a less than convincing display against Ballinamore Sean O'Heslin's.

On Saturday, an eager, hard working Allen Gaels caused them problems for the opening ten minutes, opening up a two point gap but then Mohill hit top form - three points in two minutes and they never looked back as the Drumshanbo side weren't able to cope with their suffocating defence that started in the forward line but also their sheer pace and enthusiasm.

Keith Beirne top scored with a tally of 1-8 as he got on the end of some great moves but it was the driving force of Shane Quinn that illuminated this game to show everyone what they have to overcome.

Allen Gaels started the brighter and had a few chances before Diarmuid McKiernan came upfield to pop over a fifty in the second minute. Keith Beirne pulled back a point but the impressive James Flynn pointed after good work from Shane Walsh.

The Beirnes, Martin for the Gaels and Keith for Mohill, swapped points before Martin put Allen Gaels a deserved 0-4 to 0-2 ahead after ten minutes as Mohill were struggling to find their rhythm, Alan Wynne demonstrating the Gaels fire with a brilliant interception to cut out a Danny Beck pass to Beirne in front of goal.

But find their rhythm Mohill did with three points inside two minutes - Keith Beirne on target after good work from Shane Quinn, Alan McLoughlin crashing a shot off the crossbar after a surging Caillin Canning run and Beirne again, again set up by Quinn.

Caleb Duffy almost struck for a goal but Padraig Tighe made the save, Shane Walsh pointing the rebound. But Mohill stretched the lead with good points from Beirne, a nice score with his left, and Ronan Gordon who blazed over the bar with a goal on.

And Mohill more or less killed the game off four minutes before the break - Allen Gaels were penalised for over-carrying on the fifty yard line, Shane Quinn quickly sent the free to Alan McLoughlin. He found Ronan Kennedy who floated a ball across the face of the goal for Shane Quinn, who started the move, to tap home.

McKiernan made a great save to deny Ronan Kennedy a goal and Mohill added points from a Beirne free and Domhnaill Flynn to leave the halftime score at 1-9 to 0-5, Padraig Tighe saving a shot from Duffy before the break.

Allen Gaels opened the second half with a good James Flynn point but despite a lot of pressure, they could not close the gap and a solo Ciaran Kennedy point on six minutes started an avalanche of scores, Keith Beirne tapping home from a Ronan Kennedy pass despite appearing to be in the square before the pass.

Quinn, Beirne, McLoughlin and Kennedy would add points in the next seven minutes with a sole Martin Beirne free in response. The game became disjointed with Tighe saving from David Wynne before Beirne converted the Drumshanbo team’s last score with eight minutes left in the half.

Mohill never let up with Kennedy, Flynn on target, Shane Quinn seeing a shot saved by McKiernan before sub Oisin Madden soloed through for a third goal. The only sour note for Mohill was a late black card for Alan McLoughlin.

Talking Point: Mohill are still not at 100% as they bring back in Keith Beirne and Oisin Madden but they look sharp, fit and strong. Allen Gaels have shown glimpses of promise but this shows them how far they have to go yet.

Turning Point: Allen Gaels started brightly but three Mohill points in two minutes and a Padraig Tighe save from Caleb Duffy turned the game firmly in favour of the reigning champions.

Ref Watch: A few hefty challenges, some odd skirmishes and a bit of taunting was nothing Brendan Sammon couldn't and didn't handle effectively. He may have missed a square ball for Keith Beirne's goal however.

Highlight: Shane Quinn's goal, from forcing a Gaels player into over-carrying to it's speedy execution and slick passing, was a thing of beauty. A real treat for the real GAA fan.

Lowlight: The second half turned into a cakewalk with just 1-2 for Mohill in the last quarter and a lack of competitiveness.