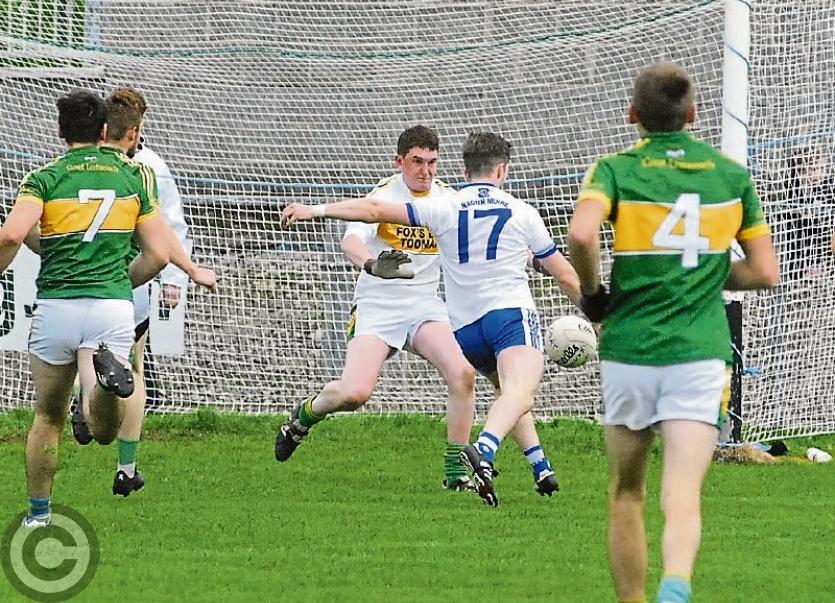 This was the game where many predicted a shock but a well drilled and incredibly fast St. Mary's were up and running from the gun, their first score a goal that left Gortletteragh bravely but vainly chasing the game.

Gortletteragh trailed by just two points at the break but their inability to convert chances came back to haunt them as St. Mary's pushed on in the second half and were never seriously threatened.

With speed seemingly in every sector of the field along with raw physicality, St. Mary's are definitely shaping up and they will go into their semi-final against Aughawillan in justifiably high spirits.

After a Jack Heslin wide, St. Mary’s hit Gortletteragh like a tidal wave with a great move and a Michael Corrigan pass ending with a precise Daire Farrell goal after just three minutes. Robbie Lowe and Nicholas McWeeney would add points in the following minutes as Carrick started well.

But Gortletteragh are not faint hearted and a nicely taken Colm Duffy score on eight minutes was followed by a Cathal McCrann point after good work from Francis Flynn. Padraig Gallagher then fielded a long ball and scored a good point under huge pressure, Gortletteragh feeling he should have had a penalty.

Nicholas McWeeney fisted the ball over the bar before Ray Mulvey cut inside to point, a sight that would dominate the game. Jack Heslin curled a great shot from a tight angle over the bar but Gortletteragh would miss two good chances to one for Mary’s.

Flynn, from a 40 yard free, and Mulvey swapped points as did Conor Reynolds & Mulvey but Gortletteragh were left ruing three misses from a Flynn free, Conor Reynolds & McCrann just before halftime as they trailed 1-6 to 0-7.

And just like they did in the first half, St. Mary’s quickly burst out of the traps to put the game to bed - Ray Mulvey burst through the centre to point in the first minutes before a good pass from Robbie Lowe set up Michael Corrigan for a point from a tight angle.

Then Daire Farrell broke through on four minutes, his shot just tipped over the bar by keeper Niall Tiernan while the Gortletteragh netminder then made a great save from Alan Doherty. Doherty, on as an early sub for Robert O’Donnell, then pointed from a tight angle after good work from Nicholas McWeeney.

Gortletteragh’s first score of the second half came on ten minutes to cut the gap back to five points but Ray Mulvey responded with his fifth point of the day. James Campbell scored a lovely point for Gortletteragh but despite two bad misses from Mulvey & Farrell, a Doherty free left six between the teams again.

The final quarter was a disjointed affair with St. Mary’s holding out quite easily - sub Brian O’Donnell chipped over after a pass from Mulvey and was then booked for protesting a late challenge on the score with nine minutes left.

Doherty completed the scoring with a free six minutes from time with a free while Gortletteragh looked as if they were denied a penalty when McCrann was fouled in the area as he battled to get through, the ball breaking loose.

John Reynolds received a black card for obstructing the run of Nicholas McWeeney before Gortletteragh were awarded a penalty with a little over two minutes of added time left. A long free was batted out by a defender but Padraig Gallagher was quickly onto the ball but was pulled down by James Glancy.

Glancy received a yellow card but Padraig Gallagher’s spot kick cannoned off the post and was cleared, unclear if keeper Conor Glancy got his handed to it. James Campbell got a point when his high ball bounced over the bar to complete the scoring.

The game ended sourly for Gortletteragh when David Campbell received a straight red card for an off-the-ball incident with Brian O’Donnell. Referee Eamon O’Grady consulted his umpires and produced the red card although Campbell continued to protest the decision after the final whistle to the match official.

Main Man: James Campbell, David Mulvey and Padraig Gallagher stood out for Gortletteragh while Micheal and Nicholas McWeeney, Conor Farrell, Robbie Lowe and Daire Farrell were impressive but Ray Mulvey was easily the stand out man on the pitch.

Talking Point: St. Mary's mix of pace and physicality is proving an interesting mix and will be hard stopped. An apparent injury to Jack Heslin didn't help Gortletteragh but needing to get the victory over Drumreilly may have drained them for this contest.

Turning Point: Daire Farrell's goal in the third minute might have been early but it set the tone for the game and meant that Gortletteragh had to chase the game.

Ref Watch: Another strong outing for Eamonn O'Grady, kept the game flowing. Gortletteragh made three appeals for penalties, got one and probably should have got another.

Highlight: Ray Mulvey's pace and accuracy on the run was a real treat for the football fan and leaves one wondering would the St. Mary's man be open to a County recall.

Lowlight: We expected a barn burner but we got a game that never truly burst into life, the lack of atmosphere from the stands capturing the mood on the field.