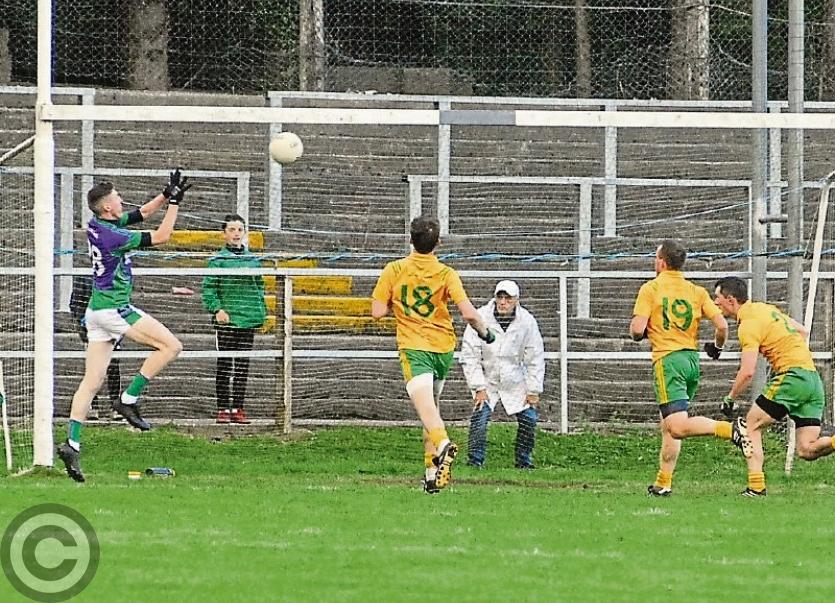 The meeting of one of the favourites for the Intermediate Championship, Leitrim Gaels and a second team in Ballinamore Sean O'Heslins produced the result that most expected but Sunday's game proved to be a much more competitive game than many would have predicted and closer than the final score would suggest.

Having seen their first team claim a draw with Glencar/ Manorhamilton the previous evening in the Senior Championship, there were a number of players in the Ballinamore starting line-up who will have aspirations of featuring in next weekend's replay and that may ultimately have played a role in derailing Ballinamore's quest for a place in the last four of the Intermediate Championship.

But in an impressive display, Leitrim Gaels produced a much improved second half performance as they registered 2-9 after the break to claim their place in the semi-final of the competition.

While Leitrim Gaels finished strongly, they were overshadowed for much of the first half by a determined Ballinamore side although the first significant chance of the game fell the way of Leitrim Gaels.

With the game barely two minutes old Stephen Goldrick rattled the Ballinamore crossbar although he could consider himself very unlucky not to be awarded a penalty as his jersey was clearly pulled as he prepared to shoot.

Having survived those early attacks, Ballinamore upped their intensity considerably as they went on to take control of the contest as they scored the first point of the game, courtesy of Finian Sharpley.

It was to get better from a Ballinamore point of view as they went on to score a further five points without reply with Shane Murphy, Andrew Burns (two), Paddy Connaughton and Sharpley putting them in complete control after 10 minutes of action.

The strong wind, a Ballinamore attack that was in full flight and a Leitrim Gaels defence that was ponderous meant the prospect of an upset was beginning to look a very real possibility.

Leitrim Gaels went some way towards steadying the ship when they registered their first score in the 11th minute when the ever-reliable Eunan Treacy converted a free.

Treacy converted another free six minutes later and with nine minutes of the half remaining the deficit was reduced to three when the impressive Aidan Flynn fisted over the bar after a strong run.

Ballinamore ended a 14 minute scoreless spell when Niall McGovern scored a stunning point after beating two defenders and that was followed by another impressive score as Sharpley pointed from an acute angle with three minutes of the half left.

Seconds later Ballinamore's six point advantage was re-established when Cathal McHugh pointed but to their credit it was Leitrim Gaels who finished the half on top with late points from Aidan Flynn and Shaun Chandler leaving four between the sides at the interval.

Trailing 0-9 to 0-5 as the second half got underway, Leitrim Gaels knew they had it all to do but within four minutes of the restart they were right back in contention courtesy of a goal from substitute Enda Moreton.

Although Ballinamore edged back in front with a Niall McGovern free, Leitrim Gaels were on the verge of taking complete control.

That in fact proved to Ballinamore's final score of the game as Leitrim Gaels dominated the final 20 minutes.

A Ryan Goldrick point was quickly followed by Leitrim Gaels' second goal of the game as Enda Moreton applied the finishing touch to a well worked move that carved the defence open.

There was an apparent acceptance from the Ballinamore players that the game was now beyond them as illustrated by the withdrawal of Niall McGovern and Leitrim Gaels enjoyed a trouble free final quarter as points from Eunan Treacy (two, one free), Aidan Flynn (two), David Bruen, Stephen Goldrick and Brian McElgunn helped open up a commanding lead and ultimately put the gloss on an impressive but hard earned win.

Main Man: There were a number of standout performances on both sides with Niall McGovern impressing for Ballinamore and substitute Enda Moreton pouncing for two Leitrim Gaels goals. The pick of the bunch was Aidan Flynn who scored 0-5 and got better as the game went on.

Talking Point: Were Ballinamore happy to sacrifice their Intermediate campaign  in order to give them the best possible chance of winning their senior replay next weekend? The substitution of Niall McGovern suggested   he was being saved for next weekend.

Turning Point: The half-time introduction of Enda Moreton proved  pivotal as he went on to score two goals. His first was a low and composed finish which helped swing the momentum in his side's favour.

Ref Watch: Leitrim Gaels should have been awarded a second minute penalty after Stephen Goldrick was fouled and Mick McWeeney was correctly black carded  by Cyril McKeon.

Lowlight: After a thoroughly enjoyable opening 40 minutes the competitiveness disappeared from the game in closing 20 minutes