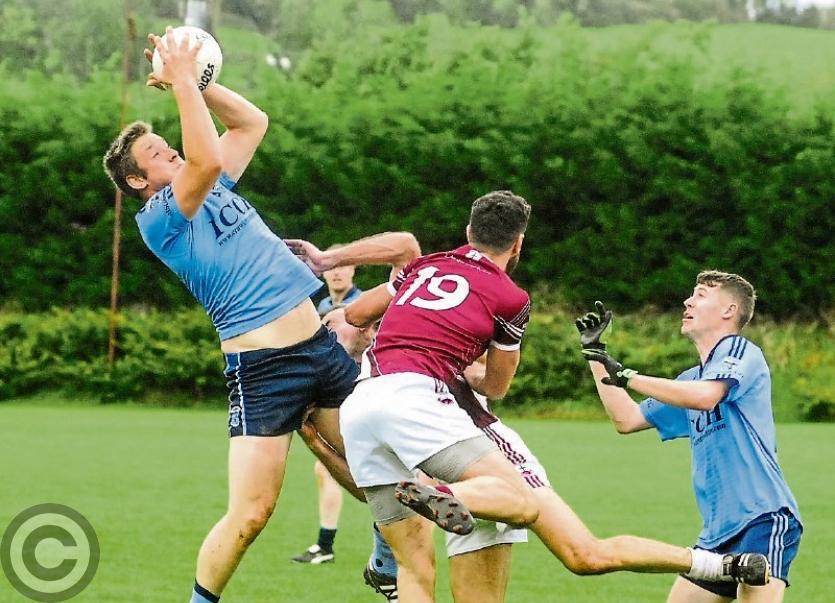 In four simple words, the headline neatly explains just why a superb and hard working Eslin prevailed over a wasteful Drumkeerin in Ballinamore last Sunday.

It might seem like the phrase “goals win games” sums up this exciting encounter but a strong team performance rather than one or two outstanding individuals carried Eslin into the semi-finals.

True in Conor Beirne, they had a man carrying the leadership role with calm assurance, turning provider rather than scorer in chief but there were a lot of top performances in all sectors of the field and it was this overall strength that carried them through the sticky patches.

Eslin made the most of their chances and defended with discipline and steel, two traits that Drumkeerin couldn't match as they kicked well over 13 wides, wides that would kill their challenge.

That Eslin were hanging on to an extent in the last quarter is not in dispute, neither is the fact that they did it intelligently and, for the most part, comfortably but Drumkeerin will feel, and there is truth to it, that they kicked it away.

Conor Beirne set up Brian Higgins for the game's opening score but with both sides kicking wides, it was Drumkeerin who seemed to take control when a bad Eslin sideline ball was intercepted and James Gallagher finished easily to the net.

Jerome Maguire added a point but Eslin got into the game with a bit of luck when Ronan Reynolds long range shot was misjudged by keeper Kevie Forde, perhaps with his attention on Niall Beirne, and the ball ended up in the net on 11 minutes.

Three minutes later and Eslin were on their way - a long ball saw Niall Beirne catch the ball one-handed with two men around him but he still turned and drove the ball to the net.

James Gallagher and Conor Beirne swapped points but incredibly Eslin had more goals on the board than points after 25 minutes when a poor Niall Beirne shot was knocked down by Conor Beirne, Brian Higgins' nice finish finding the net.

Drumkeerin finished the half with a Cathal McCauley point but two wides before them trailing 3-2 to 1-3 at the halftime break, a lead quickly extended when Conor Beirne raced out to collect a long ball, played a one-two and then swept a wonderful point over the bar from distance

However, Drumkeerin were beginning to generate some momentum and a short 50 routine ended with James Gallagher firing over.

Jamie Stenson then produced a piece of class, dodging and sidestepping a defender before chipping the ball over the bar on six minutes.

But a minute later, the game was right back in the balance and this time it was Drumkeerin who went route one - a high ball into the Eslin defence and Jamie Langan, on as a sub late in the first half, buried the ball in the back of the net.

Drumkeerin needed to follow up but kicked a wide and Eslin replied with a Conor Beirne free to leave four points between the teams. James Gallagher finished off a Drumkeerin break from defence with a fine point.

But Eslin were matching Drumkeerin score for score, a long ball up to Niall Beirne threatening a goal before the ball was worked back to Jamie Stenson, a nice spin leading to a point.

Drumkeerin's cause wasn't helped when the second James Gallagher earned a straight red card on 16 minutes but they were still dominating possession and still kicking wides.

The north Leitrim men did get a boost when Tomas Beirne received a black card for pulling down sub Dean McVeigh, Darragh Flynn tapping over the subsequent free to leave a goal between the teams with ten minutes to go.

Drumkeerin's wides continued to mount, two more before Jamie Langan put over a great effort from distance but a great move from Eslin ended with sub Eamon Stenson firing over the bar.

Drumkeerin came back once more, McCauley hitting a lovely point from play with less than three minutes to go and two points between the teams. Drumkeerin saw James Gallagher kick a wide while Eslin's Brian Higgins was lucky to escape with a yellow for a drag down.

But Eslin made Drumkeerin pay for their wastefulness when a strong Conor Beirne run saw him charge through an exposed Drumkeerin rearguard, a pass to his unmarked brother Niall leading to a clinical finish to the back of the net.

That ended the game despite a late Cathal McCauley consolation free for Drumkeerin as Eslin booked their place in the semi-finals against Annaduff, a team they have already defeated this year.

Main Man: Conor Beirne set the tone for Eslin but this was no one-man show. From Ronan Reynolds, Shane Beirne and Kevin Bohan in defence, Tomas Beirne & Brian Higgins in midfield and Jamie Stenson and Niall Beirne in attack, Eslin were a handful in all sectors. For a wasteful Drumkeerin, James Gallagher (Creevelea) led the fight and was a real leader. Jerome Maguire, Ciaran White, Jason Byrne and Felim McHugh worked hard but they needed better accuracy.

Talking Point: Annaduff will face Eslin in the semi-finals and have already lost to their neighbours. So you'd have to know that Eslin fancy their chances and after this incredibly disciplined, all round team display, Martin McGowan's team might justifiably be setting their sights on ultimate glory.

Turning Point: Brian Higgins goal, their third and just before halftime, gave Eslin the breathing space they needed to hold out against Drumkeerin.

Ref Watch: Another good outing for Michael McGirl, did a good job, kept up with play and made the big decisions when needed.

Highlight: Jamie Stenson's dodge, sidestep and chipped point was a stand out moment.

Lowlight: The amount of bad wides, particularly from Drumkeerin, blighted the game.