Annaduff march on after scare 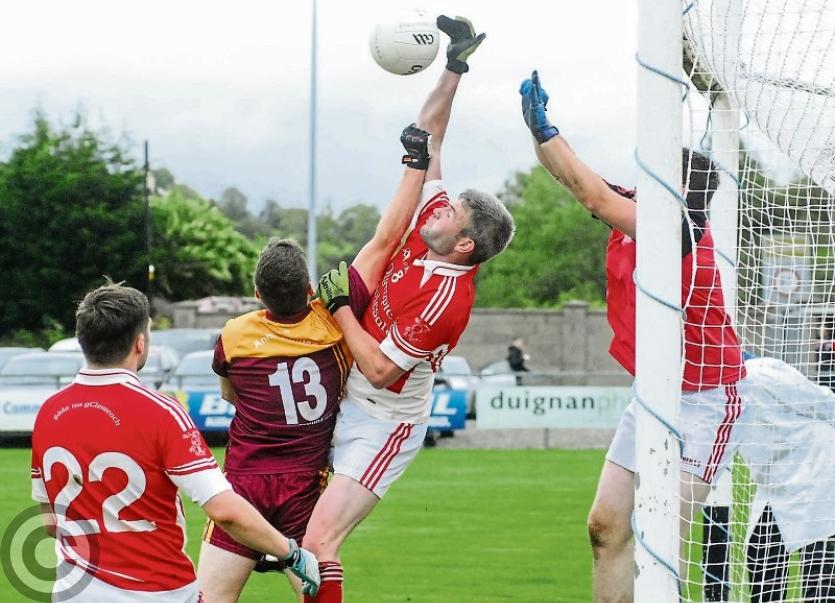 Annaduff's bid to make an immediate return to the senior ranks remain on course after their Smith Monumentals Intermediate Championship quarter final victory over Ballinaglera but they were made to work much harder than the final score would suggest.

A goal in each half, from Sean Duignan and Alan Glancy ultimately proved decisive. The second goal proved to be particularly important, arriving 13 minutes into the second half and it went a long way towards ending Ballinaglera's challenge.

There was an air of inevitability about the closing stages of the contest but it is to Ballinaglera's credit there wasn't that sense throughout the game as Annaduff's explosive start suggested the game may have been over before it had really started.

Kenny Cox opened the scoring in the second minute when he fisted over after exploiting a large gap in the Ballinaglera defence and the lead was doubled two minutes later when Sean McNabola curled his shot between the uprights after good play involving Eoin Gill, David Duignan and Kenneth Cox.

The lead was further extended when David Duignan was afforded far too much room and he causally pointed.

With the Ballinaglera defence struggling to get to the pace of the game Annaduff struck in the sixth minute for the game's opening goal.

Hugh Moylan, Donal McNabola and Ronan McCormack were involved in the initial build-up and when a long ball was delivered to Kenny Cox he had far too much time to pick out the unmarked Sean Duignan who had the simple task of dispatching the ball to the unguarded net.

A Sean McNabola point added to the Annaduff lead as Ballinaglera struggled to get going.

A defensive substitution helped tighten matters at the back for Ballinaglera and suddenly they were able to get their hands on the ball and show their attacking abilities.

Two wonderful points from Enda McGuire were precisely what was needed from a Ballinaglera point of view and although Annaduff replied with a David Duignan point, Ballinaglera were looking a much more dangerous outfit.

A fine Seamie McMorrow score from a wide position was followed by further Ballinaglera points from Wayne Reynolds, Seamie McMorrow, Fergal Wynne and Damien McGourty to leave just two points between the sides.

Annaduff lifted the siege they were under when Sean McNabola converted a free but Ballinaglera hit back with points from Seamie McMorrow (free) and Enda McGuire to level matters.

With six minutes of the half remaining Annaduff completed the first half scoring when Ronan McCormack pointed to give his side a 1-7 to 0-9 half time lead.

After such a free-flowing and exciting opening half, the second half never matched those heights and proved to be a scrappier affair.

The half was seven minutes old before Annaduff's Sean McNabola converted a free for the opening score of the half and a minute later Sean Duignan also scored from a free.

Christian Wynne replied with a Ballinaglera point but 13 minutes into the second half they were dealt what would prove to be a fatal blow when Kenny Cox struck for Annaduff's second goal.

A Kenny Cox point added to the Annaduff lead before Ballinaglera replied with two pointed frees to leave four between the sides with 10 minutes remaining.

Ballinaglera's Seamie McMorrow responded for Ballinaglera but Annaduff were dominant once more and added to their lead with points from Sean Duignan, Hugh Moylan and Kenny Cox before Enda McGuire completed the scoring with a late Ballinaglera point.

Main Man: Seamie McMorrow, Enda McGuire and Tomás Cornyn were all very much to the fore for Ballinaglera while David Duignan, Kenny Cox and Sean Duignan were  to the fore for Annaduff with Sean McNabola's overall contribution giving him the nod.

Talking Point: Ultimately there could be no denying Annaduff were full value for their victory but Ballinaglera put up a stubborn resistance, particularly in the first half when the likes of Enda McGuire and Seamie McMorrow gave a wonderful exhibition of point scoring.

Turning Point: Annaduff's second goal, 13 minutes into the second half, knocked much of the wind from the Ballinaglera sails. Kenny Cox showed great footwork to sidestep the Ballinaglera goalkeeper and a defender before squaring to Alan Glancy for an easy finish.

Ref Watch: Seamus Mulhern issued red cards to Annaduff's Keith Duignan and Ballinaglera's Conor Reynolds but neither decision had any impact on the final outcome.

Highlight: During the opening half when they appeared to be on course for a heavy defeat Ballinaglera staged a spirited fight-back with some stunning points scored by Seamie McMorrow, Enda McGuire, Wayne Reynolds and Fergal Wynne.

Lowlight: Ballinaglera will look back on the opening 10 minutes of this fixture and ask themselves the dreaded question ... what if?