Gaffney claims the first All Ireland event of the season 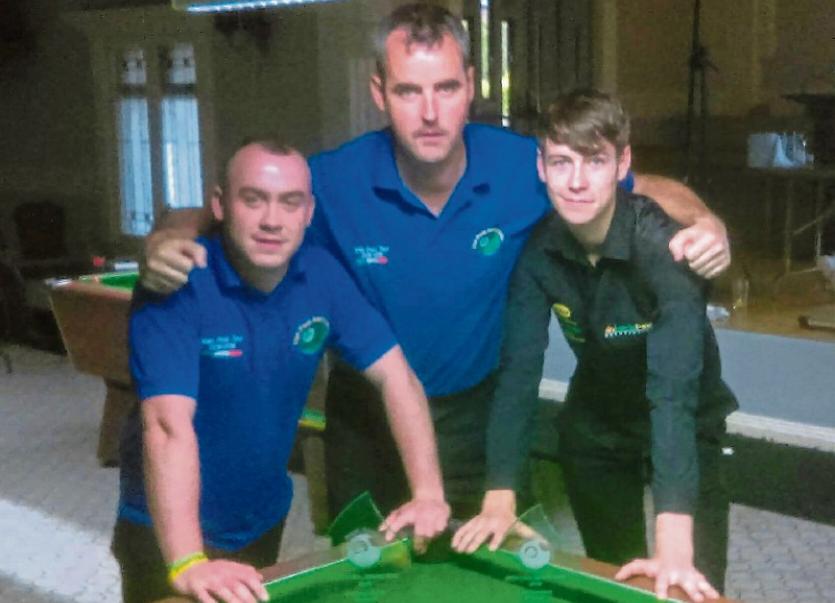 Jamie Gaffney and Lee McSharry pictured with Maurice Cullen following their Under 23 final at the Irish pool Grand Prix.

Jamie Gaffney from Ballyfarnon was in flying form at the first Irish Pool Association event of the season in Shannon, Co. Clare earlier this month.

Jamie won the title on Sunday morning where he beat fellow Leitrim man Lee McSharry of Drumkeerin 6-1 in the final. On Jamie’s route to the final he beat Antony Delaney of Limerick 5-3, current finalist of the Mens event Adam Maher 5-3.

Jamie wasn’t to be stopped and saw off Wexford’s Ben Doyle 5-0 in brilliant time which got him to the final. Lee beat two time world champion and European Champion Cormac Kerr in the first round, Lee going 3-0 down. Lee scraped out a frame to go 3-1 followed by two dishes 3-3.

From here, Lee went ahead 4-3, Kerr levelling 4-4. Kerr had a chance in the decider but missed a ball to middle with Lee clearing up to win 5-4. Lee beat Morgan Thomas 5-3 and had a brilliant win over Jordan Synott 5-4 in the semi.

Well done to both of our lads, great to see top two in Ireland both Leitrim men!

In the last 16 of course two Leitrim men had to meet, Maurice vs Wayne, Maurice Clenching this 7-4, Jamie beat Donegal’s Shaun Sharkey 7-6 and Lee with an outstanding performance obliterated Mayo's Declan Hough 7-1.

So we had 3 into the Quarters, never done before by Leitrim. Lee lost to Stephen Dempsey 8-4, Maurice lost to Robert Brady 8-1 and Jamie lost to Rory Buchanan 8-6. What a great weekend for Leitrim Pool with some brilliant results by the lads!

The Leitrim Pool Association Premier League is about to kick off with over 36 entries it is going to be very big! Participants are divided into two groups, all players will be handicapped based on their perceived ability vs the field.

All matches are races to 10, you receive a bonus point for a 10-9 or 10-8 loss. All draws will be posted on Facebook, in the Observer and on Cuescore to be played that week.

€40 entry to be paid to Dave or Kevin McWeeney by September 30, as the draw for groups and fixtures will take place.

The Leitrim pool Association Pub league will commence on Thursday October 18. The format for this year will be: five singles frames, three frames of doubles that must be timed, five singles frames. It is a race to seven, you receive two points for a win and one point each for a draw. This league will also be handicapped, teams with three or four county A and B players the opposition receives plus one frame, teams will receive plus two frames if the opposition has five or more A or B players. All frames must be played out! To enter please contact our Pub league secretary Darragh on 0879158326 or contact us for more information! Deadline for entries is October 14.

Names can be given on the day before 1pm or contact Dave on 0876490835 to enter. All proceeds from this event will go to charity as this is replacing the special needs tournament.